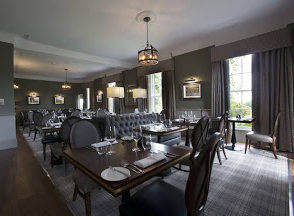 At least they kept the tiger tied up. It can be a concern when you stay at this rather lovely Aberdeenshire hotel. I've been here twice. The first time was in the ownership of Robin Duff of Pemberton who converted a baronial pile into an elegant place for a country weekend. He died in 1990, last of the line. It's now more recognisably a hotel, and the grounds are now a golf course. The current owners have had the good sense to acquire and retain most of the original house contents. Urquharts of many generations stare down at you, and artefacts from all over the globe still adorn the place. Undoubtedly one of the ancestors would have been in India, and bagged his tiger. But instead of the poor animal being turned into a fly 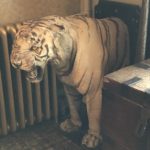 blown rug, this beast had his forequarters stuffed, and mounted as though emerging from a wall. He was originally positioned coming out of a corner in the staircase, which must have given the heeby-jeebies to many a late nighter emerging from the bar after a nightcap too many. I thought he had gone: instead he now stands guard outside our bedroom, kept far from Pineapple dining room.

It's one of two dining options here, the more formal one than the 1236 bar in what must once have been the wine cellar or larder. Come to think of it there is a third option, to be seated inside a perspex dome outside. This must be wonderful on a starlit night, but hey, this is Scotland. The very lovely staff are less than complimentary about working in a deluge. The Pineapple itself is spread over a number of dining rooms. I suspect that people are being more spread out because of COVID, but all of the dining spaces are elegantly done up. (That's more than can be said for the truly vile out of keeping extension, whose architect should be hung, drawn, quartered, then have something nasty done to him. I hope in architect hell there is a Permanent Walk of Shame.)

Our first encounter with the Pineapple kitchen at lunchtime was inauspicious. A bowl of roasted vine tomato soup was unpleasantly over garlicked, and with the sourness that you get when a beginner doesn't realise that most tomato soups made in this country need a spoonful of sugar. So to dinner. Unless it's a destination dining room, you really don't know what you're going to get in a country house hotel.

It's an attractive menu, sensibly short with four starters and mains, plus a steak selection. (If beef can't be well represented in the home of Aberdeen Angus, something is very far wrong.) As a starter it came in the shape of pulled short rib lollipop, Bordeaux bone marrow jus. There were two deep fried breaded bonbons. Vaguely reminiscent of haggis bonbons, with a gravy which had certainly seen some red wine, but from which the marrow was anonymous. And nine quid for two seemed at odds with the rest of the menu which was pretty keenly priced. A taste of Asia beckoned with a warm crispy duck salad with pak choi, honey sesame dressing, hoi sin and toasted cashew nuts. Many chefs in this country attempting Asian dishes shy away from their strong flavours. Chef had the guts to go with a garnish of chopped, unseeded finger chillies, and the net result was quite good; however, it needed more dressing and one with more punch, and the duck was crisped using a deep fryer, not by way of shards of expertly roasted crispy skin. But so far, so OK.

The game was raised for the main courses. Lamb rump had some pleasant seasonal veg and a couple of slices of dauphinoise. I'm fairly sure the advertised pea purée originated from some sort of squash, but that was neither here nor there. If I'm quibbling, the lamb hadn't been seasoned and you either have to render the fat, or remove it before service. Star of the evening was halibut with spring greens and lamb fregola. (Fregola is a Sardinian pasta which could be mistaken for couscous.) The advertised sauce, a smoked bacon emulsion, had to be rejected as it had cream. Chef improvised with, I think, a sauce vierge. The result was a triumph of seasonal freshness. Had the fish been given 30 seconds less, this was a 10/10 course. I should also mention that it was great value for money. Halibut is expensive: this whole dish, however, is yours for £22. Yes, you can order a number of sides at £4 each, but you don't need them.

Finally, take a bow, Meldrum House, for your recruitment and training policy. It can't be easy in this neck of the woods, yet every staff member we encountered in our three night stay was lovely. What makes great, as opposed to merely good, service, however, is experience. Thanks to the very very young lady who looked after us. You will be a real star very soon.

Is this a go-to food destination? Probably not for me. But did I have an enjoyable dinner in lovely surroundings? Most certainly.