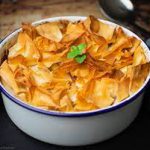 And before you start, no potato either. No shepherds or cottagers are involved in today's offering.

As with many of my odder, off the cuff recipes, this was inspired by an item which was needing used. Without being obsessional about it, I dislike seeing food going to waste. A week or two ago I created a Chinese masterpiece, eight or nine dishes or so, including home made spring rolls to start. They in turn were inspired by the fact that I knew I had a pack of spring roll wrappers in the freezer. Now in the fridge, and it's but rarely that such food appears on our plates.

Today's idea came from the Hairy Bikers book, The Hairy Dieters, Book 1. Their aim was to lose weight, while still enjoying variations on their favourite foods, pies being one of them. I read about them using filo pastry as a topping, and took it from there. The end result was a great success. Now you could use anything which you would normally fill a pie with. I also had a packet of mince. As it was a Saturday evening, I thought a little more care was needed than for standard mince and tatties, and as you will note what happened to the mushrooms, this wasn't a diet version.

Mince and Mushroom No Pastry Pie

The number of spring roll sheets you need will depend on the shape and surface area of your pie dish. For a one litre standard, round pie dish, I used about 10. Make sure you have plenty, as it's much nicer with a fairly dense topping.

With ordinary mince, you can add flavour with lovely buttery mash. No such opportunity here, so make sure the filling is really tasty. Mine was half way between basic workaday mince and a tomato-less ragù.

In a large, deep frying pan gently fry the onion, carrot and celery in some olive oil, seasoning with salt, pepper and 2 of the garlic cloves. When the veg are tender, add the mince and increase the temperature to brown it all over. Push the veg to one side of the pan and make sure they don't burn. Once your mince is coloured, mix well with the veg and season with a little more s & p. Add the wine and bubble until the liquid has reduced by 50%. Add about 100ml of the stock, the bayleaf and thyme, a generous glug or two of Worcester sauce, and about half as much balsamic vinegar. Bubble gently until the meat is well cooked. You will probably have to add some more stock. You want the finished product to have a little liquid, but not much.

While the mince is cooking, prepare the mushrooms. In a separate pan, melt the butter over a high heat. When it is bubbling add the mushrooms, some salt and the remaining garlic, and stir fry. Initially the mushrooms will absorb the butter. Continue cooking until they start to exude liquid. Set to one side.

Put a little oil into a bowl. With a pastry brush, lightly oil each spring roll wrapper, one at a time, scrunch it up and put it on top of the dish. Continue until there is a generous layer covering the whole of the top. Put in the oven and bake for about 25 minutes. The top should be golden brown and the filling should be piping hot.