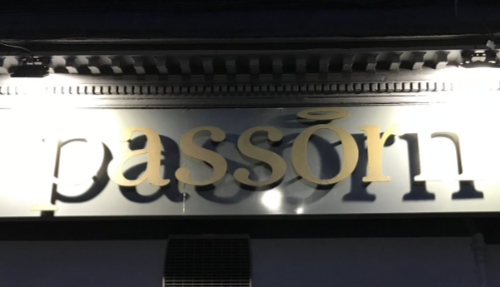 How many angels can dance on the head of a pin? This, believe it or not, was apparently quite a common topic for discussion in days gone by. Understandable, I suppose. You didn't have Corrie or East Enders. What else were folk to do of an evening? Then other types of mass entertainment were developed. Public executions, for example. Angelic discourses fell out of favour.

The more prosaic among you may be pondering the relevance of this intro. Ha! You doubt my purpose at your peril. Clearly not a Thai speaker among you, otherwise you would have known that Passorn is the Thai word for angel. That explains the halo above the O on the door, and also the slightly over done heavenly references.

I'm not sure why I don't eat Thai food more often. I loved my visit to the country - if you take Bangkok out of the equation. Unusual, as I normally enjoy cities. We made a conscious decision to avoid the red light district, but you couldn't get away from the revolting spectacle of fat westerners dining with porcelain doll featured, unbelievably pretty girls, whose forced smiles relapsed into ineffable sadness when their grotesque "companion" went to the loo.

But, the food, the food, the food. All of south east Asian food is fusion. I believe that the world must thank Chinese traders. And we in turn must give thanks to all the lovely Thai people who travelled half way across the world to give us grub like tonight's. What makes my failure to visit here before even more inexplicable is the close-ish connection. Cindy, of Passorn, is a Thai lady who is married to the brother of P, as in our good friends P & J. Over a glass or two one evening, a pilgrimage was organised.

I am quite fussy about trying to get names right. The website footer and content refer to this as Passorn Thai; however, as the site header and the business cards simply state Passorn, that's what we'll call it. Apologies if I got that wrong. After the horrible downturn which affected all eating places, it was great to see the room filled to capacity. There is, however, a slight downside for the hard of hearing. As the designer was from the School of Hard Surfaces, it can get quite rackety. Just focus on the food. Trust me, that's a very good thing to do here.

If you're used to huge piles of cheap Pad Thai, you may be a little taken aback. The emphasis here is very much on quality. But fear not: four starters, four mains and a couple of delicate portions of rice were more than enough. The menu is at pains to stress provenance and authenticity. Meat and seafood from Scotland; herbs and spices imported from Thailand.

Thai cuisine is, in the main, fairly hot. That was evident immediately. The sweet chilli dipping sauce with the prawn crackers didn't come out of a bottle and packed a (pleasant) punch. Very sensibly, with their signature dishes they allow you to select the heat level on a scale of 1 - 5.

Khu Muan–Mr and Mrs was a dish of prawns fried two ways. Tempura, and some marinaded in coriander root and fried in filo pastry. Both exemplary. Even better were two salad starters, Miang, and Plar Neur – Yum Saow Dod. The former featured crispy sea bass with mango and other Thai good things, and was probably the dish of the night. The latter had beef fillet and a tamarind dressing. Neither of these was the same as you may have had elsewhere. This really is a cut above.

To mains. Keang Massamann is lamb shank slowly cooked in an unctuous creamy sauce topped with trademark Thai crispy shallots. Angel curry - one of the many references to the name and its inhabitants' heavenly home - was sirloin steak charred then finished with a red curry sauce and served on a bed of potatoes. The second week running that steak has featured in Tom Eats! - a huge improvement on last week's steak frites.

On to a couple of fishy dishes. Pla Samun Pri was monkfish in a coconut and turmeric sauce. Finally, Pad Phet Tom Yum was a stir fry of king prawns, scallops and squid. Every word of the menu's boast about their seafood is justified. It was enhanced, not hidden, by the tom yum paste. For all of our mains, we opted for 3 on the Richter scale. This resulted in a pleasant mouth tingle, with every one of the many and subtle flavours clearly discernible.

I wouldn't have bothered with dessert - indeed, I couldn't find a dessert menu when I went online to look - but Cindy comped us some good ice cream, and there was coffee to finish up, of a far higher quality than you find in many places with a closer coffee affiliation.

Earlier in the column I bemoaned my foolishness in not having visited earlier. Don't make the same mistake.