The Slow Food movement was formed in Italy in 1986 in protest at the opening of a McDonald’s in Rome. Our ancestors, of course, knew all about slow cooking. It is wonderful to see that more and more people are rediscovering its delights. This has been led, in part, by the sky-high prices of prime meat. It has also led, sadly, to severe inflation on the prices of cuts which were once cheap, lamb shanks being perhaps the best example. The humble oxtail, however, is one part of the animal which remains great value. To prepare it well is a labour of love – it can make a lamb shank dish look like fast food by comparison – but for me this is one of the kings of stew.

A few initial thoughts. Choose your oxtail carefully. I have read a few recipes, written fairly recently, which tell you purchase one or two tails and get the butcher to cut them up for you. What planet do these people live on? Even in good butchers’ shops oxtail it’s generally sold in packs, and this is where some firmness is required. You want the large wide sections such as those pictured below Avoid the narrow pointy bits – these are good only for oxtail soup. 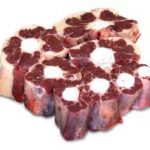 On to portion control. I normally serve a couple of large section per person and sometimes add a smaller one as well for hungry/greedy folk like me. A Damascene moment struck the last time I was making this. Cooking for fairly picky chums, I had a last minute panic that they might be put off by the thought of what they were eating (impossible to disguise if the bones are staring you in the face). So I stripped the meat off the tailbones before serving and discovered that instead of having enough for five or six servings I could easily feed eight.

Oxtail is a classic in Roman cuisine, where they call it coda alla vaccinara (slaughterhouse tail). You will often find it as a filling for ravioli – now that really is a labour of love. Spurred on by my own writing I made this the other day, but I used insufficient flour to dust them and they all stuck together. Ah well, learn from your mistakes.

The other issue is fat. You make the stew in two stages, the theory being that you skim off fat in the middle. I find this near impossible to do with a spoon when the fat is liquid on top of a hot pan. There are a couple of alternatives. You can use kitchen roll, a couple of sheets at a time, as a kind of blotting paper. Alternatively allow the gravy to cool (minus the meat and veg) and put in the fridge overnight. It’s then fairly easy to scrape it off. But don’t leave in the meat and veg, otherwise it’s like trying to scrape an inch of topsoil off the Himalayas.

This recipe is simple enough but it is time consuming. I use no celery or garlic as some do. I season only with salt, pepper and thyme – others use bay and parsley as well. And I most definitely do not use stock. With a five to six hour cook there is adequate time for the water to take on flavour.

Trim the fat from the oxtail pieces. Dry them and dust in seasoned flour, shaking off any excess. In a heavy oven proof pan or casserole brown the oxtails in the oil or dripping over a medium to high heat. You will need to do these in batches and you will probably have to top up the oil/dripping. Set to one side. Dispose of any excess fat. In the same pan, brown the onions and carrots, then return the oxtail to the pan.

For no logical reason, I do stage 2 on the hob and stage 3 in the oven. If using the oven, pre heat to 150°C/ Mark 2. Add the wine, water, thyme and sugar. Season with some S & P. Bring to the boil, then cover and simmer for about 2 hours on the hob or in the oven, turning the oxtail pieces occasionally. Remove from the heat and put the meat and veg to one side. You now want to remove the fat from the top of the gravy in whichever way you choose. See above.

Return your meat and veg to the skimmed or blotted gravy. Add the tomato purée and the lemon juice and bring to the boil. Put in the oven and cook for a further three hours or so, until the meat is falling off the bones. Check the pan two or three times, turning the oxtails to make sure they don’t dry out. Add more water if needed. When the meat is cooked, take out the meat and veg and set to one side. Reduce the gravy to the desired consistency. I like it to be thick and rich, just like…oh never mind. Check the seasoning. Return the meat, either on or off the bone (see above). Make sure everything is piping hot before serving.

Ingredients (no point specifying exact quantities – depends on your numbers)

Potatoes (allow at least a couple of good sized ones per person); butter (be generous); a good readymade horseradish sauce (I prefer creamed to hot) – approximately 1 tsp per potato, but taste as you go along; salt and pepper (again, be generous).

Boil the (peeled) spuds until tender. For best results use a potato ricer to mash them. I find that no matter how well you use a conventional masher there is always a lump or two remaining. Never try to mash potato in a food processor – you will end up with wallpaper paste. Add a large dod of butter, plenty of salt and pepper. Stir up a bit, then add the horseradish and mix in well. Taste regularly (the cook’s perk) until you get the taste and texture you like.