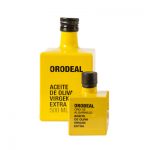 It is said that the most successful people in life are those who made plans early and followed them through rigorously. Apparently, on leaving university, Michael Heseltine scribbled down his goals on the back of an envelope. The list read – 25 Millionaire; 35 Cabinet Member; 45 Leader of the Party; 55 Prime Minister. All well and good, but the sharp eyed among you will have noticed that, although he achieved the first two, he was neither leader of the Conservative Party nor Prime Minister.

And for most of the rest of us, whether we have our envelope written or not, life just isn’t like that. Whether you call it fate, luck or circumstance, most of us find our paths mapped by events unexpected or beyond our control or both. I think it’s fair to say that the story of Orodeal Extra Virgin Olive Oil (EVOO) falls into that category. I first encountered Kirkcaldy based Callum Henderson through Twitter. I was curious to know how he had become distributor of a top class EVOO from Spain, and we arranged to meet. My confusion increased when he appeared wearing a shirt with the logo of a well known builder’s merchant. 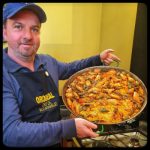 In 2006 Callum and his wife Ann-Marie acquired a derelict property in Fuentes de Cesna in Andalusia, visiting when they could to do renovation work. As Callum says, at the outset it was little more than posh camping. This is one of the world’s most important olive oil producing regions, but that was of only passing interest – or so he thought. The olives are harvested from November to January each year. Visiting early in 2008, Callum found 50 litres of olive oil on his doorstep, with a note from local builder Antonio. The gist of it was I noticed you didn’t harvest your olives last season, so I’ve taken the liberty of doing so, and I hope you agree this is a fair share of the oil.  Callum met Antonio in a local bar. And thus it was that the Hendersons learned for the first time that they were owners of a small olive grove some 4 kilometres away, with mature trees which produced excellent quality oil.

Callum picks up the story himself. I became really interested in the whole process and tried to learn as much as I could. The locals were great – they really helped me. A couple of years later I got involved in the harvest for the first time. You need a team of four, three with rakes and one with a vibrator. (That’s to shake the tree, in case you were wondering – Ed.) At that time, all the olives went to the local cooperative to be pressed. You have the option of keeping your own oil, or selling to the Co-op. A few years later the mill was taken over and most of the locals moved to a mill in Algarinejo, about 10K distant. By this time, I realised that not only was the oil up to EVOO standard, it was top quality at that. It seemed to be a waste just to be selling it as generic EVOO. I got the idea for the name Orodeal, derived from Oro (gold) de (from) Algarinejo.

Callum tried to go it alone, branding his oil as a premium product. He soon realised, however, that economies of scale were militating against him. To secure and maintain EV status the oil has to go through a series of tests including laboratory analysis, and tasting by an independent approved panel. The expense of all of these stages in addition to production costs made the dream unviable. Having made the decision to give up, Callum had a chance meeting in the same bar where he had learned of his ownership of the grove. The new President of the cooperative, which produces in total some 1.6 million litres of oil, floated the idea of part of the total production of the co-op being marketed under the Orodeal brand, and asked Callum to lead the process. 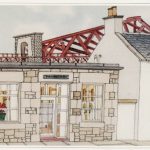 The distinctive yellow bottles are now distributed in Holland, Belgium, Germany, Sweden and France. Callum looks after the UK. Other products are available. Olive oil pearls (using a technique pioneered by Ferren Adrià of El Bulli fame) are widely used by airlines as an easy way of making dressings six miles high. Quality potato crisps are made under the 1916 label. In Scotland, 2015 Chef of the Year Craig Wood uses it at his Wee Restaurants in Edinburgh and North Queensferry. You will find it in the kitchens of Nick Nairn’s cookery school, and in The London Paella School.  Even more importantly, it is an ever present by the stove in Casa Johnston.  It is planned to double production in the next five years, to continue and develop this remarkable success story.

I’m not sure what lessons the rest of us can take from this. We can’t think of best laid plans having gone agley, as there wasn’t a plan in the first place. Seize the day? Go with the flow? I have no idea, but Callum has done both. Good luck, Orodeal.

To find out more, including how to buy the oil, visit the Orodeal website www.extravirginspain.com