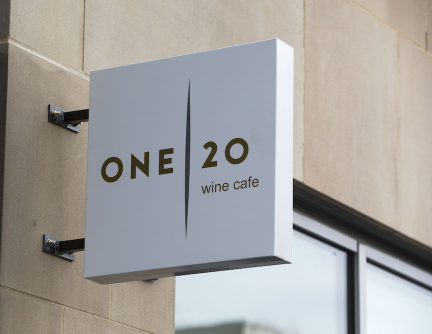 Has COVID made you less active? Have your mental facilities slowed as a result? Here's a simple test for you. You will have noted that today's star is called One20. I can tell you that it's situated in Dundas Street (at the north end just a few doors up from Clark's Bar if that helps). Your task, without looking at the rest of the page, is to guess the postal address. Now check your answer. 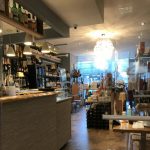 You made it? There is hope. Reward yourself with a drink. A glass of good wine, perhaps. In normal times I would advise you to come here for one, but you can't. Well, that's not strictly true. The front part of the space is a wine merchant/delicatessen, the "cafe" part being at the rear and downstairs. At the moment you could buy a bottle of wine go out into the street and drink it, quite legally. (Unlike the majority of Scottish towns Edinburgh does not have a local byelaw prohibiting the consumption of alcohol in public places.) Inside, the tables are well spaced and protected with elegant screens. They are exactly as they were when we were in Tier 2. Yet I can't have a glass of wine with my lunch now. Alcohol, it would seem, is a cause of COVID. Explanation please, Professor Leitch, with supporting scientific evidence.

One20 opened in the summer of 2018, with much fanfare in the financial press. It is the brainchild of father and son Ronnie and Kyle Reid, who are hands on owners. It's hard to get a life story through a face mask, and I suspect it would take more than one lunch time to get through the whole of Ronnie's CV. I asked him how they came to be in the hospitality industry, as we call it these days. In a slightly lilting north east accent, a tale unfolded involving fish, wine, import and export and a few years in Venice. We never did get to the restaurant bit. Except it's not a restaurant, it's a cafe. How do we know this? Because Kyle and Ronnie successfully took Edinburgh Council to court when they were threatened with closure. If you weren't paying attention, that was under lockdown Rule 35.2.4 when you had to shut if you were a restaurant but could stay open if you were the C word. You can't be a cafe said the enforcement team - your food is "too smart and too fancy". 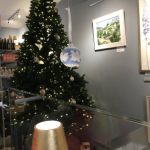 These are not adjectives generally applied to food in this column, but smart could certainly be applied to the place itself. An understatement, in fact. Both the design and the finish are breathtaking. The Reids took over a concrete shell and created this out of nothing. Kyle tells me that they physically did the work themselves, though there was design input from Italy, and the room is topped off with stunning Murano chandeliers. The emphasis is on quality and this is continued into the short menu.

There is a choice of 5 starters and 5 mains. Oddly there is no choice of pudding. It's tiramisu, unless you count macarons as a dessert. I found the pricing oddly inconsistent. Soup is good value at £4.75, but a smashed avocado vinaigrette is £8.25. Smoked salmon is £11.25 (£10.50 in the Balmoral) and if you would care for some avocado on the side, you will pay £14.75. Yet a plate of burrata with pesto and semi-secchi tomatoes (expensive ingredients all) is only £9.25. Those who know no better might raise their eyebrows at paying £13.50 for anchovies on toast; however, these are Cantabrian anchovies. A 100g tin of extra large ones will set you back £22 at Fine & Wild.

Once you start considering prices in detail - not something I do all that often - your brain starts playing tricks on you. £14.75 might seem hefty for lasagne, but this was a dish made with care and featuring Aberdeen Angus beef. We had a half portion each as a starter. Served with a delicately dressed salad featuring lollo rosso and fennel, it was a delight, and great value for less than eight quid. (You begin to see the convoluted route my brain is taking me?) Waiter Andrea is a proud Sardinian and very good at his job. They offer a couple of alcohol free wines. Never having tried it, I was curious about the Merlot. Andrea made a face and gave me quick sample. Then I made a face and he pointed me in the direction of their alcohol free beer, a Moretti Zero. Later he did insist that we come back another time to sample his favourite, a £55 Syrah from Sicily (a mere £40 across the shop counter).

The pricing inconsistency which I mentioned came into its own with our main course, a mixed plate of charcuterie and cheese for 2 at an astonishingly low £13.75 each. From memory, 4 different meats, sun dried tomatoes, and miscellaneous pickled things including some mostarda di frutta and the rather nicely pickled, crunchy veg selection which the Italians call giardiniera. These were all pretty good, but the cheeses were sublime. Italian in the main, including the red skinned formaggio ubriaco (drunk cheese - it's steeped in red wine). Truffles don't generally float my boat, but pecorino with black truffle was a combination as divine as anything Dante could create. A fabulous gorgonzola dolce was next up, and the party was made complete by a foreign guest, a Brillat-Savarin which stole the show.

I had to go and have a wee lie down after writing that. With luck, after the next visit the wee lie down may be as a result of a bottle of Andrea's recommended tipple.

One final thought. When I devised my scoring system, which many have described as eccentric, I knew a day such as this would come, featuring a great main course involving no cooking at all. The eagle eyed among you (probably those of you who correctly guessed the address) will have noticed that for one day only I have changed the scoring criteria to fit.