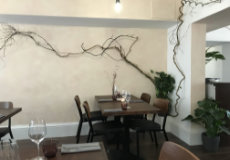 This eagerly awaited opening sees Stuart Ralston of Aizle fame with his first restaurant in the city centre. I have never visited Aizle, despite its stellar reviews. Being honest, I’m tired of tasting menus. It’s impossible to create your own atmosphere around a table when each and every course, including the obligatory pre-this and pre-that, is accompanied by earnest descriptions, delivered in breathless fashion. On a good day, you’ll be told all the ingredients: on a bad one, you will be informed not only of the name of the farmer whose produce you are sampling, but also the name of the cow responsible.

When your pre-lunch entertainment involves Roddy Doyle (at the Book Festival along the road), it is essential to follow with something of equal quality. I immediately liked the relaxed simplicity of the place, plain walls adorned with twigs, pot plants, bare bulbs. Spare but effective. It’s almost deserted. How long have you been open, I ask? Two days, comes the reply. Let me predict with complete confidence that this state of affairs will not last long.

Food wise this is a complete change of style from the mother ship. The website describes it as a New York inspired restaurant with a love for Asian cuisine. The eponymous Noto was Bob Noto, described in his obituary in the New York Times as the quintessential New Yorker. Stuart apparently made his acquaintance while working for Gordon Ramsay in New York. I didn’t quite get the NYC vibe but it really matters not. The food is great.

The menu is a wee bit confusing, as some plates are smaller, some are larger. You may have to guess by price. On the other hand, if you are fortunate enough to be served by the wonderful Silvia (who hails from near San Gimignano, if that’s relevant) you will be expertly guided. Small plates joints tend to chuck food out whenever it hits the pass (in one such I was served chips as a first course). There is a bit of that here, but they have the sense to leave the larger plates till the end.

Two of us ordered four of the small and two of the large. They arrived with frightening speed. Crab is a do not miss for me on most menus, but I’ve never had it like this. A shell arrives containing white meat only in a lot of melted butter perfumed with dill. Simple but wonderful. Cured trout, apple and mustard was exactly what it said. A chef’s skill is in inverse proportion to the size of his garnish. I swear that the cubes of apple were no more than 2 x 2 millimetres (if you think that’s easy, try it for yourself) and the tiny globs of grain mustard must have been applied using a spoon from someone’s daughter’s dolls house.

Jerusalem artichokes came with a cheddar mousse sprinkled with truffle and hazelnut. The dish which advertised itself as Gem lettuce, chicken skin, parmesan, herbs was in fact a very fine Chicken Caesar Salad with crispy skin instead of breast meat. The larger plates maintained the standard. I’ve had bad experiences in the past with bao buns – think biting into a warm nappy – but the Fried Buttermilk Chicken Bao with umami mayonnaise was a triumph. Buttermilk is used in authentic southern fried chicken recipes, but this was as far removed from any of the Colonel’s abominations as you would wish. Our favourite plate was the plaice with chicken butter and spring onion. I’ve never had a piece of plaice as fresh or as inherently flavoursome, and the marriage with a meaty, reduced chicken stock resulted in a perfect consummation.

I don’t usually give details of every single mouthful, but it would be unfair to leave anything out. An off menu caramel “panna cotta” (made with oat or almond milk, I think) was produced for the non cream eater. Not the world’s greatest dessert, but so kind of them to have made it unasked. A simple raspberry tart was a classic, with the crispest short crust pastry ever.

The service? Delightful. In one or two cases Silvia’s colleagues had to go and ask the kitchen about our menu queries, but what do you expect on day two? We did find the service almost too efficient – we’d eaten 4 out of 6 plates inside half an hour, but that too will calm down as the place fills up. For Tom Eats! 2019 has been a vintage year. Noto, however, is up there with the best. Book now. These will soon be the hottest tables in town.