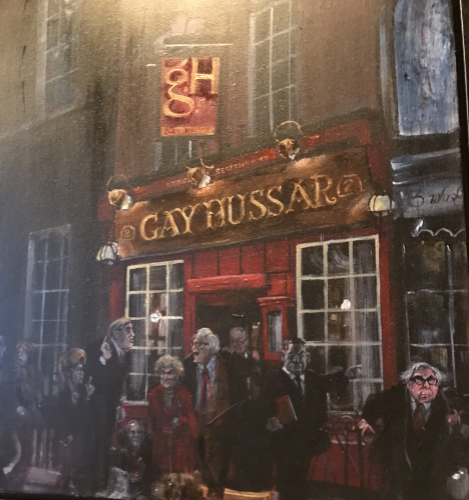 Don't be confused by the picture. Read on.

Noble Rot is a winemaker's term. It is what happens in a good year, where you delay picking your grapes for as long as you dare until they start to shrivel, causing the sugars to concentrate to exceptional levels. This is how the world's greatest dessert wines are created. The French call it la pourriture noble. Dan Keeling and Mark Andrew chose the name for their wine merchant's business.

The first eponymous restaurant was founded in Bloomsbury a number of years ago, and was enthusiastically reviewed in the old Tom Eats! website. This place, in Soho's Greek Street, was opened slap bang in the middle of the Great Plague. Considering the pavement mobs we had to circumnavigate en route here on a Wednesday evening, I think Londoners have lost their fear. 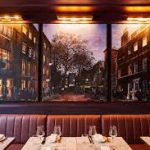 The restaurant itself was packed. When booking I had a choice of 6.45 or 9.15. Unlike the mothership in Bloomsbury, the ground floor is fairly restricted in size. The maximum table size they can accommodate is six, though you can book a private room for ten at the very top. In the middle, where we were seated, is a dinky room with sixteen covers. The building until recently housed the famous The Gay Hussar, beloved of left wing politicians over the years. In a fit of inspiration, Messrs Keeling and Andrew commissioned artist and cartoonist Martin Rowson to paint a triptcyh for each wall of our room, depicting patrons and Soho characters past and present. It would be fun to come at opening time to try to pick them all out. Our waiter Callum gave us what was supposed to be a guide. It was virtually impossible to follow, but it did include the names of all those depicted. Politicians included Michael Foot, George Brown and Barbara Castle. Among the Soho "worthies" are Paul Raymond, Francis Bacon and Jeffrey Bernard; and my favourite trio, for their sheer incongruity, comprises Georg Frideric Handel, Roger Rabbit and Jimi Hendrix.

As far as I can see from reading reviews, there are a number of classics which seem to be ever presents on the menu. I would have loved to attack the whole roast chicken with morels, vin jaune and a rice pilaf, Sadly, it's for two or three people, and not suitable for non cream eaters. Dishes don't sound much more classic than Robert Carrier's Pâté aux Herbes. Like the man himself, that's quite a piece of work. A great chunk of a terrine on a plate with some nicely dressed frisée and a few cornichons. Well, we've seen that many times. But this was a vibrant green! I discovered a recipe, which includes spinach, basil, parsley, chervil and tarragon. Some versions include tongue and ham. This one had pistachios and little pockets of traditional chicken liver paté. A highly skilful assembly job - making a good terrine isn't straightforward - and absolutely stunning. The other starter of ossocollo affumicato, delightful though this smoked pork was, paled, almost literally, by comparison.

Although not separately named, the first part of the menu was split in two, the first section including olives and bread (about half a sourdough loaf for two). It also included choux buns with chicken liver parfait and Tokaji jelly. These are priced per bun, so we tried one. Another critic wrote about fantasising of a croquembouche* of them. I know what she meant.

Of our two mains, the less successful was the braised rabbit leg with lentils and bitter greens. In parts we found a herb or spice which we couldn't identify, other than to remember we'd had it in India and didn't much care for it. We asked Callum, but didn't get to the root. It doesn't sound like you could get simpler than a plate of monkfish, mash, peas and bacon, but read on. The big ball of fish was so springy one might have wondered if it was cooked through. From this kitchen, that was never going to be a problem. Beautifully seared, then, I guess, done in the oven. This was perfection. Wish I could cook fish this well. The mash had loads of butter, but was still identifiable as potato; a light, slightly creamy sauce was divine and the peas were, well, part of the five a day.

I have no idea how you make a rhubarb and brown butter tart, but a thin layer of filling was topped with something thin and sweet and crunchy and lovely, the whole offset by some yoghurt-like crème fraîche and some lightly poached rhubarb.

It was at this stage that Callum had time to have a chat about the art, and to open up a bit. Up until this point he had been efficient but edgy. Nice man. I probably shouldn't write about this place without a passing nod to the wine. A huge list on an iPad. That's progress, I guess, but, as L remarked, if you're struggling for choice you can't use a pin any more. There was also a blackboard with more wines between £27 and about £70 - per 125ml glass. When I picked myself up, I realise these were pretty amazing specimens, which you could also have in a 75ml measure, a rare opportunity for normal mortals to sample rare produce.

*A croquembouche is a French celebration cake made up of a huge pile of profiteroles.

**They also publish a terrific food and wine magazine, 4 issues a year for £40 with free delivery in the UK. Its arrival is always one of the highlights of my month. More details from their website.

The original Noble Rot also has a wine bar. Earlier in a warm day we had done a lot of walking  and felt in need of some refreshment. We popped in here to enquire. No space but we were referred to

I can't complete this review without a highly honourable mention in dispatches for The 10 Cases. As we had been promised, the wine selection is remarkable - and we were just choosing from a truncated section offered at a pavement table in the Soho sunshine. We were served by an elegant Parisienne. Why come to London? we enquired.  Because people who work in hospitality in Paris are so rude, came the reply. I make no further comment.

We ate whipped salt cod with tapenade and vegetable crackers, while sipping a stunning Riesling. I say we, but as the cod had cream in it, I had to scoff it myself. Following on from the previous day's gluten fest at Brasserie Zedel, we polished off another baguette or two as well. We had a look at the menu. Short, seasonal, inviting. Most expensive plate £26. I made a promise to my self to visit when next in town.