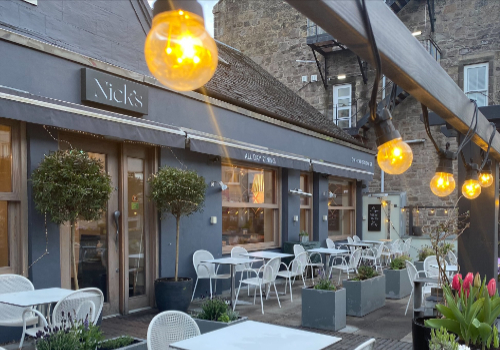 To those of who keep up to date on the restaurant scene, don't bother to write in. Yes, I am aware that at the end of August, they had a horrendous fire. By coincidence David Dickson's review had hit my inbox just three days earlier. My instinctive reaction was to ignore it; however, the redoubtable Nick and Julia Nairn had just converted the famous Nick Nairn Cook School in Port of Menteith into a restaurant. Tom Eats! hasn't got there yet, but after consultation with Nick and Julia we decided to run this review, so you can get a flavour of what to expect when you venture to the Trossachs.

A late summer evening found us in Bridge of Allan, that delightful Stirling enclave with a top notch university set amid verdant acres of green fields.  This is a thriving high street though like too many, the interesting shops were closed at 1730.  The good number of locals streaming down the high street on their way from the railway station were denied the opportunity of a nice piece of cheese or home made bread, meat and the like.  Would our high streets thrive if they adopted a continental, customer focussed approach and give the tired commuter the opportunity to indulge in great local produce mid week rather than a weekend treat?  Woodwinters, the excellent wine shop was open with the ever helpful assistant happy to encourage to explore new continents and grape varieties.

The redoubtable Allan Water Cafe was doing a roaring trade.  Queues out the door for their fried fish, scampi and real chips. Nick’s sits in a row of shops, a bistro which appeared to be frequented by locals: jovial hellos to the regulars.  Equally warm welcomes for the out of towners.  Having secured a table on the outside terrace, overhearing that every table was booked and once they had cleared were booked again, we were doubly pleased to secure one.

The menu is short and focussed.  There’s a range of starters: tartar, squid, soup.  We opted for the sharing platter. £18.  Quite a lot but it had a deep bowl of green and black olives, grapes, generous flat bread, sourdough French toast, hummus, string cheese and thick and generous slices of Great Glen charcuterie of salami and slices of venison.  Delightful.  Thereafter, fish and chips with Pearl white fish, flakey and flavoursome enrobed in the lightest of beer batters.  Proper hand cut chips with skins on, mushy peas and a terrific bowl of excellent tartare sauce: acidic, unctuous, sharp.  Noodles with sesame seed salmon was another dish to hit the spot.  Fresh, tasty decent portion of salmon atop a generous portion of noodles.  A huge helping of chilli jam complemented the chillies and peppers scattered on the noodles, themselves awash with a deeply savoury soya based sauce.   Several wines by the glass and bottle. Coffee and espresso at just over £2.  The espresso was deeply flavoured and the perfect foil for an ending to a wholesome meal.  The staff were very attentive and amiable. There was a bit of a wait between starters and mains and without starter it could have been close to 30 minutes. Perhaps they had been caught unawares by an unexpectedly gloriously balmy evening, which in turn took the edge of the wait.  A truly local bistro serving excellent food.  Every high street could benefit from one.

Thanks to regular guest reviewer David Dickson. We haven't met for a good couple of years. I hope we can remedy that soon. It is hoped that Nick's Bridge of Allan will reopen in the summer of 2022.

Nick's at Port of Menteith 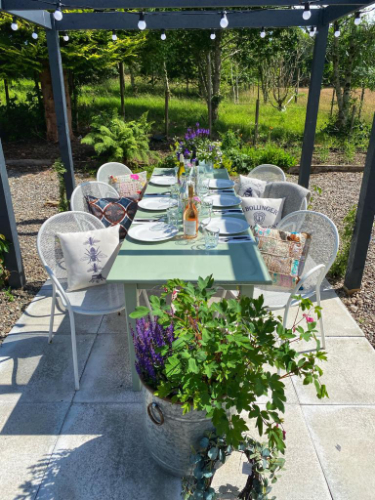 It's not widely known that the Nairns had just completed phase one of the conversion of the cook school at Port of Menteith into a restaurant. Tom Eats! has yet to visit, but it is attracting rave reviews on Trip Advisor. The restaurant is open Thursdays to Saturdays 12 - 10 and Sundays 12 - 6.30. 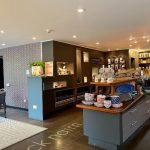 In addition to the restaurant, there is a life style shop offering kitchen gadgets, gardening accessories and homeware.

There are two menus, the restaurant menu itself and Paul's Pizzas, made in the pizza oven by specialist Paul Hughes, who has worked with Nick for five years.