Saturday 9 February 2019 is National Pizza Day. Yes, it’s official. Who thinks these things up? I have no idea, but I have a sneaky hunch that the British Society of Pizza Restaurateurs may have some involvement. It’s fun to make your own, though the BSPR won’t thank me for sharing this recipe. When you’ve finished, work out the cost of the ingredients, compare that with what you are being charged on the High Street, then weep or gnash your teeth, or both.

I have to say that I do admire the skill of those guys who, with a few deft flicks of the wrist, can send skywards a frisbee of dough and convert it into a perfect pizza round, the dough concentrated around the outside. (Actually, the skill is as much in the catching as the throwing. Like as not you’ll end up with a hoopla of dough round your wrist.) Not only am I unable to do this, I have great difficulty in making them round at all – see the picture. But, like size, shape doesn’t much matter. Rectangular is perfectly good, or, like mine, somewhere between the two is fine.

It’s very similar to making bread; however, the dough is a little wetter, and you need a lot of flour to stop it sticking as you create the shape. A combination of flour and semolina is best. 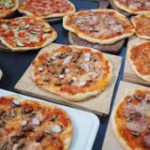 Mix the flour, yeast, sugar and salt in a baking bowl, making sure the yeast and salt don’t touch. (Salt will affect the yeast’s rising properties.) Add the oil and about half of the water, and mix well. I usually mix initially with a knife and get the hands in later. Purists will mix exclusively by hand. You could use a machine, but where’s the fun in that? Add the remaining water a bit at a time, till you have a smooth dough which has absorbed all of the flour. You may not need all of the water. Tip onto an oiled surface and knead for about 10 minutes. It’s ready when the dough is the consistency of Play Doh, and a finger indentation will slowly bounce back. Put in an oiled bowl, cover with cling film (to prevent a crust forming on the dough) and leave in a warm place until your dough has doubled in size. This will take at least an hour, preferably more. Bizarrely, given the conventional wisdom that heat is necessary, you can leave it in the fridge overnight and get the same result. When the dough has risen, cut into six equal pieces. Shape into balls and dust with a mixture of flour and semolina. Press them down with your fingers and form a round disc. Assuming you are not a tosser (see above), roll them out as thinly as you can. The circumference should be a little thicker – work it with your fingers.

Heat the oven to maximum temperature. For most domestic ovens this will be 240°C/Mark 9. This is where the pro kitchens have the real advantage. A wood fired pizza oven can reach 425°C or more, needing only about 90 seconds to cook your pizza. If you plan to make this  a lot, it’s worth investing in a pizza stone. I had bad experiences: I carefully followed the instructions for tempering the thing. Despite that it cracked down the middle on the first use. Dust a baking tray well with more of the flour/semolina. Top your pizza with your choice of ingredients – see below for some ideas – drizzle with olive oil and cook until crisp. Put your baking tray on the oven floor to ensure a nice crispy bottom. This will take about 8 – 10 minutes.

This was created in Naples in 1889 as a tribute to Queen Margherita. The colours reflect those of the Italian flag, and this was apparently the first time cheese is known to have been used on a pizza. Spread the base with a spreading of chopped tinned tomatoes and season with a little salt. Add slices of mozzarella. For my money, buffalo mozzarella is to be preferred over fior di latte (made with cow’s milk). The former will melt in pieces, the latter melts into strings. Garnish with some fresh basil leaves.

The phrase means four seasons in Italian. The association between the ingredients and the seasons seems fanciful to me; however, beginning with spring, the classical ingredients are cooked ham and black olives; artichokes and anchovies; tomatoes and mozzarella; and mushrooms. Typically each quarter of the pizza has a separate set of ingredients, which is rubbish if you’re sharing. Overall, it’s more fun just to let your imagination go, as I did with- 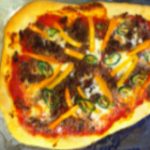 This was one I made a few years ago, a vague nod to Pizza Express’s American Hot. From memory it had the usual tomato and mozzarella base. I cooked some minced beef and spiced it up with Tabasco or Cayenne pepper or both. (Ca’ canny if using the latter – it’s powerful stuff.) Make sure the meat (or indeed any sauce) is cool before loading your dough (and don’t put too thick a filling on, otherwise your pizza will be soggy). I topped this with strips of pepper and a green chilli, seeds left in, cut into rings. And very good it was too.

I’m now off to research the date for National Champagne Day.