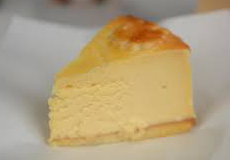 You could be forgiven for thinking that I keep a special note of these food days. No, I don't, nor do they appear automatically on my Outlook Calendar unlike sundry random dates. Good Friday and Easter Monday - fair enough;  St Andrew's Day and St George's Day, hmm; but Trooping the Colour and the Battle of the Boyne? No thanks - I'd just as soon have the Food Awareness Days.

But caution is required. I picked up this one from an online news blog called the Edinburgh Reporter. It seemed an appropriate inspiration for Tom Cooks!, not least because I have an excellent cheesecake recipe; however, researching this a little further, I discover it is an American Food Awareness Day. Still, if you read my  column on racism in food (On The Side 8 July), you'll know my views on cultural appropriation, so I'll carry on regardless. (Future dates for your UK diary include National Beer Day on 7 August, and National Tofu Day on 1 September. You have been warned.)

We tend to think of cheesecake as being American in origin. Certainly an American, William Lawrence of New York, seems to have accidentally developed a form of cream cheese, when attempting to emulate the soft French cheese Neufchâtel. But by 1872, when this occurred, there was precious little new under the sun. The Ancient Greeks seem to have had a dish which was vaguely similar. It was inevitably pinched by the Romans, who would have spread the word on their travels. A different style of confection known as sambocade featured in an English cook book from 1390. No less an authority than Heston Blumenthal argues, therefore, that cheese cake is an English invention. I gather that, technically speaking, it is not a cake at all. It is variously described as a custard pie, flan or tart. I neither know nor care. Made well it is a very fine thing.

Cheesecakes can be either baked or unbaked. Today's is a baked version. It takes a bit of time (start early to allow time for cooling and refrigerating), but is well worth it. Like many of my better recipes this one came from Sarah Mellersh and her now sadly defunct cookery school, Let's Cook Scotland. Don't play around with the basic ingredients. It's quite sweet, but the sour cream just adds a wonderful counterbalancing sharpness. I don't keep my eggs in the fridge. If you do, make sure they're at room temperature before you start. And don't use low fat cream cheese.

You will need a tall 20cm springform cake tin and a baking sheet to put it on.

Preheat the oven to 180˚C/Mark 4 and place the baking sheet on a middle shelf. Crush the biscuits. This is best done by putting them in a freezer bag and bashing with a rolling pin. You could use a blender on pulse, but be careful. You want a wee bit of texture, not dust. Melt the butter in a small pan, add the crumbs and the pinch of salt and mix well.

Spread the crumbs evenly over the base of the cake tin and press down firmly with the base of a glass or a jar. Put the tin in the oven for 20 minutes while you make the topping.

Put the cheese in a baking bowl and mix well to soften and get rid of any lumps. Use a spatula or whisk. Add the sour cream, cornflour, sugar, lemon zest and vanilla extract and mix well. Beat the whole eggs (not including the egg white). Add to the bowl a little at a time, beating continuously till the mixture is smooth. (As a very inexperienced baker, I have learned that if you are impatient in adding your eggs, your mixture is liable to split.)

Remove the tin from the oven and lower the heat to 110˚C/Mark ½. Leave the door open for a couple of minutes to help the temperature drop. Leave the base for a few minutes until the oven temperature is correct, then pour the mixture into the tin. Shake gently to level it. Sarah says you can run your finger gently over the top to get rid of any air bubbles. Tom's Top Tip Don't do this with a finger you've just used to lick the remaining mixture from the baking bowl.

Return to the oven on top of the baking sheet as before. Bake for about 1½ hours. The cheesecake should be set, but still have a slight wobble. Run a thin spatula round the edge to separate the cake from the tin, turn off the oven, leaving the tin inside until the cheesecake is completely cool. Remove from the tin, put on a plate and refrigerate before serving.

This is terrific on its own, but you could serve with berries and/or coulis, or add half a teaspoon of powdered ginger to the mix, and decorate with stem or candied ginger.

Tom Cooks! is taking a break and will return in September