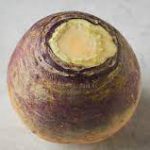 Don't start shouting that I'm cheating and that's why you didn't guess it. If managers of Scottish supermarkets are allowed to sit supinely (is that possible? - Ed) while head office decrees that they should label their turnips as swedes, then I'm entitled to redress the balance. And anyway N is also for navet, the little purply white root veg which is what the English call a turnip, and which I know as a spring turnip.

All very confusing, so let's define our terms. Today we're dealing with rutabarga, otherwise brassica napobrassica, otherwise the neep. It's hard to confuse with the aforesaid brassica rapa, the navet. Our hero is quite large, brown on the outside and with a pale yellow interior which turns an attractive yellow when cooked. It was first recorded in the 17th century by botanist Gaspard Bauhin. Growing wild in Sweden, hence its more common name outwith Scotland. The word neep itself? Too far fetched to think that our ancestors looked to the Latin name? Perhaps not. Napus, in case you're interested, which became nǣp in old English. 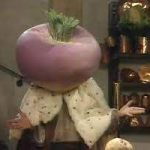 It is perhaps fair to say that our hero hasn't had the best press over the centuries. The object of desire for the intellectually challenged Baldrick in Blackadder the Third, it's also a term of abuse. In Scotland we might soften it to tumshie,  but when the English press were going for England football manager Graham Taylor after some bad results, turnip was the term (and image) they used. Speak to your average French or German person and they may well be appalled at the idea of our turnip being fit for human consumption. 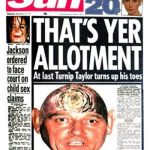 In those two countries, for older generations it was considered the food of last resort during times of wartime food shortages, with turnip and turnip juice being all that many had to stay alive. The winter of 1916 - 1917 in Germany was apparently dubbed Steckrübenwinter, or Turnip Winter. And the fact that it is also used here as sheep fodder perhaps doesn't add to a romantic image. Never mind. Let's move on.

I've referred to it as our turnip. In fact the terminology is shared in Ireland, Canada, the Isle of Man and the north of England. I was delighted to hear the Hairy Bikers fighting for the name. That's probably enough useless history. What should we do with it?

Oh, sorry, one more fact. It is a key ingredient in Branston Pickle. To quote Michael Caine, there's not a lot of people know that.

If you have any connection whatever with Scotland and our traditions, you'll probably know it as part of the Burns' Night trinity of haggis, bashed neeps and champit tatties. Bashed  and champit are interchangeable adjectives. Nothing fancy please, just mashed with a traditional masher. No ricer, and certainly no purées.

That stark treatment may explain why many dislike this veg. Unadorned, it can taste quite bitter. Add a goodly amount of butter, a lot of pepper, and a generous grating of nutmeg. You will have a much improved end product.

If you are one of those sad people who refuse to do anything with root veg other than boil them in salted water, try combining turnip in equal parts with carrots, cooking and mashing the twain together. The bitterness of the neeps and the sweetness of the carrots offset each other perfectly, and you have a lovely splash of colour on the plate, something sometimes difficult to achieve in autumn.

Or, finally, the inspired Orcadian idea of clapshot, a mixture of mashed turnip and mashed tattie, mixed with a lot of butter and chopped chives or spring onions. Whatever you choose to do with your neep, don't just keep it for Burns' Day. And if anyone asks for a turnip lantern? Either get them to do it themselves, or go to your nearest pumpkin shop. 30 years on, I may just about have recovered from my RSI.