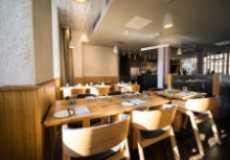 My formative student years were spent in and around South Bridge at Edinburgh University’s Old College (which was originally called New College until some blighters went and built a new New College on The Mound in 1846). Being here should in some small way feel like coming home. But the sad fact is that, Robert Adam’s masterpiece apart, South Bridge has little to commend it. It is little known that Adam prepared grand, not to say grandiose, plans for the rest of South Bridge; however, he was much better at drawing than he was at budgeting. They were rejected as being too expensive and never saw the light.

What one finds now is a hotch potch of budget shops, tourist tat emporia, takeaways and the like. Not really worth the jaunt. And then there’s Mono. Mono, Progressive Italian Dining according to their website. Now I love Italy and most things Italian, with the exception of Tripe alla Romana, but, taken together, the words progressive, Italian and dining form one screaming oxymoron. The French gave us the word chauvinist (from Nicolas Chauvin, one of Napoleon’s generals known for his extreme patriotism) but it is the Italian race which applies it most rigorously to culinary standards. Ain’t done like Nonna made it? Fuh geddaboutit.

It is perhaps no complete surprise, therefore, to learn that the chef here is Polish. The stoves are manned by Maciek Zielinski and boy can he and his team cook. The Italian part of the team is Joseph Crolla, sometime of Portobello and Musselburgh, I think. I’m not entirely sure what his role is, but the mainly Italian front of house team operate with smoothness and charm, and not a giant pepper mill in sight.

We were being entertained by the Former Big Cheese Financial Whizz (also, more recently, my kitchen apprentice) and His Learned Literary Wife. And all of a sudden, from none in a couple of years it’s two tasting menus in two weeks. You can have seven courses. With the moderation and self restraint which are the watchwords for us Johnstons we restricted ourselves to five. Plus, of course, the numerous goodies which come before.

I never make notes of meals I eat, nor do I photograph individual dishes. I depend on a photograph of the menu, and on how much I have been wowed by what I ate. It is perhaps significant that my memories of Mono are less embedded in the brain than those of many other places. (And, no, the drink is not to blame.) The food didn’t scream Italian at you, so it was a nice touch when a white amuse bouche had wee dustings of red and green just to remind us of the provenance.

Dishes came steadily, with the bare minimum of earnest spiel which can so often be the bane of a tasting menu. They credited us with having the intelligence to be able to read and understand a menu. Bizarrely for 2019, we were able to recognise almost all of the ingredients on said menu. As a student of Italian, I was annoyed with myself at failing to get mugnaia sauce, AKA meuniere/miller’s wife involving flour and butter, which were married to the cod. A mussel dish was lovely. Potato risotto and seaweed were involved, apparently. A modern style pasta dish – you could tell that in advance because they put the “Lasagna” in inverted commas – still contained a little ragù of the highest quality.

I really would never have thought of serving lamb with sheep’s cheese and pig fat. Border saddle with truffled pecorino, spring veg and lardo just should not work: but it did. Probably the star plate for me. For pudding we started to go off piste. Sea truffle gelato, chicory, pine nuts, parma violet, Douglas Fir, you know the sort of thing. Spread over two dishes, I hasten to add.

As you can see from the photo, Mono inhabits a beautiful space. It is very large – there are more tables on the lower floor. The lovely guys showed us out to our taxi, and we left with a warm glow. Yet at a prime time on a Friday night, it was barely quarter full. I’m not sure why. The curse of South Bridge? I doubt that. It may just come back to that elusive IT factor which some restaurants (such as The Cellar, reviewed last week) have and others don’t. Since I announced that I was to be reviewing Mono, so many people have got in touch to say what a great meal they once had there, and how much they loved it. So where were they all that Friday night?

On the way home L and I conferred with FBGFW and HLLW. Would we go back again? was the question. The answer was inspired by the last scene in the last episode of The Sopranos.