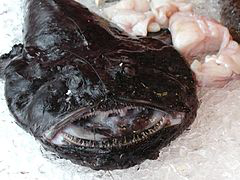 Children are cruel beasts. Many believe that William Golding called it right in Lord of the Flies. The ugly and the different are not well treated and are often misunderstood. So pity the poor monkfish. You may never have seen one: the average fishmonger simply stocks fillets on his shelves. As you will observe from the photo, it's not a thing of beauty. Not so long ago it wasn't even credited. During the scampi boom of the 1960s, unscrupulous manufacturers often used monkfish instead of prawns, because it was cheaper. (Yes, best beloveds, I know the idea of cheap fish is a pipe dream these days, but once upon a time...)

And then when we got used to the sight of it, we still mistreated it. It's just like meat, they said. Well, that was a lie too. What those who knew no better meant is that, unlike most fish, it doesn't flake or go soft when overcooked. Instead it firms up. While it is a little more forgiving than some fish, it is a crime to treat it in a cavalier fashion. If you believe that monkfish is rubbery, it's the chef to blame.

As with all fish, freshness is key, and buying a whole tail is one way to make sure of that. Don't worry if your filleting skills are non existent - it's the easiest fish in the universe to deal with. Instead of the bony skeleton with which we are familiar, monkfish has a central cartilage. Pull the skin off, cut down each side of the "bone" and remove the tails. They will be covered with a greyish membrane. Get rid of that, and you're ready to go. What you do with it will depend on the size. As fishmongers will usually cut the tail into strips, my two recipes use chunks of about 4 - 5 centimetres. Allow 150g of fish for an average serving.

The first recipe is for a classic fish curry from Kerala, the region in the southwest of India. Monkfish is ideal for this, but you can use any other firm fleshed fish (try saying that five times), or prawns. For those of you who think that you need 40 days and 40 nights to make a decent curry you may be surprised that this can be done in 15 minutes, including preparation time. Be aware that fenugreek is probably the most pungent of all Indian spices. Unless your kitchen has top quality ventilation, the aroma will be with you for a day or two.

The second is a dish of my own devising. Julienne the veg as finely as you can - ideally no more than 3mm in width. Obviously in our house I use Elmlea instead of cream. Note that in each case  the fish needs to be cooked for only 3 - 4 minutes. 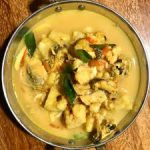 Heat the oil in a pan (stir fry heat) and add the fenugreek seeds. Add the garlic, ginger, green chilli, onions, curry leaves and sauté till the onions are transparent, stirring frequently.  Add the turmeric powder and water. Add the  fish cubes and salt. When the fish is cooked, reduce the heat, add the coconut milk and simmer briefly. After adding the coconut milk, don't allow the sauce to boil. Add a squeeze of lemon juice and garnish with some chopped coriander.

Melt the butter in a wide frying pan along with the oil. Sweat the carrot and leeks until they are well softened. Season lightly with s & p at this stage. Increase the heat a little and add the monkfish in a single layer. Cook until the cubes begin to turn white, turning once. This should take no more than a minute or so. Add the vermouth and bring to a simmer. Cook until the fish is cooked. If you need to reduce the sauce, remove the fish, then boil to reduce. Add the cream and cook for another couple of minutes. Return the fish to the pan, make sure it is heated through, adjust the seasoning and serve at once.