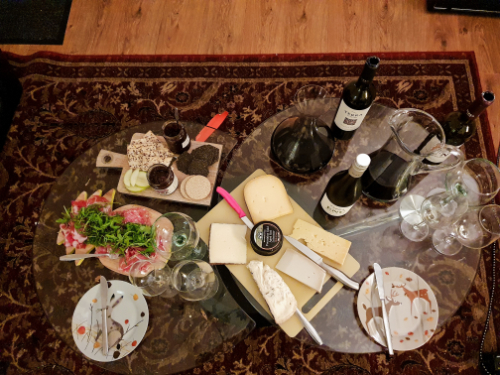 For this, the last Tom Eats! of the year (apart from the annual review, which will be over two weeks on Wednesday 16 & 23 December) thanks are once again due to our glamorous and prolific guest reviewer, Miranda Heggie. Fancy a tutored wine tasting, but can't buy alcohol out because of Tier 3? Simple. Zoom, zoom, zoom.

England may now be out of lockdown, but for much of the country who are in the new, stricter tier three, not a lot has changed. Hospitality venues remain closed, their darkened windows and closed doors an especially sad sight when walking through the city centre, newly adorned with festive lights. A little bit of cheer amongst this gloom, however, lies in the fact that many of these businesses are constantly seeking innovative ways for you to enjoy their wares in the comfort of your own home, which is how I found myself experiencing my very first zoom wine tasting a couple of Fridays ago. Organised by independent, family run wine merchants Connolly’s - who are also proprietors of a fabulous wine and cheese bar, Arch 13 - it brought together the shop’s owners with customers, and one of the winemakers whose products they sell. Peter Bright is a winemaker working in the Alentejo region of southern Portugal. As you may have guessed from his name, Bright’s not a Portugese native, but hails from Australia. After having moved to Portugal in the 1980s, he decided to settle in Europe and has been making wine under the Tera D’Alter label ever since.

Obviously, wine tastings can’t really work in the usual fashion right now, with a sommelier offering small glasses of various wines. And, not that I’ve ever made use of one anyway, a spittoon would definitely not be Covid-secure. When purchasing tickets for the event, there only seemed to be an option to purchase full bottles of the wines being presented, so I presume this is why we only tasted three. I did in due course see online a ticket which included 10cl bottles at a cheaper price, but I think this was a later addition. At £40 for all three bottles, plus the tasting itself, I’d say this was pretty good value, and when purchased by a couple not too ambitious an amount to open on a Friday night and drink over the weekend. (Or in one night. It’s Friday, it’s lockdown, no-one’s judging and no-one needs to get a taxi home). I can see how it might be a bit much for someone going solo though, or who doesn’t want to risk disliking the wines, so the 10cl bottles are a good alternative to three 75cls.

I had foolishly missed the memo that you could order cheese to have alongside the tasting, only releasing this when I went to pick up the wine. By this time however, I’d already procured some delicious cheeses from Anderson & Hill, a lovely deli in the Great Western Arcade, and had purchased some cured meats from my local continental grocer, all of which went very nicely with Peter’s wines. 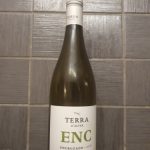 Focusing on a trio of wines from the same winemaker gives you a chance to really explore the wines in some depth. Chris Connolly, our online Master of Ceremonies, did say one needn’t feel obliged to open all three bottles, but by this point we were already sipping the white and had decanted both the reds. The white was 100% encruzado, a grape native to Portugal and commonly used in blends. When thinking of Portugese whites I often think of the zinginess of a vinho verde, though Bright’s encruzado was just one reminder that there’s so much more this country has to offer. Encruzado wines are often compared to white Burgundy, and it’s easy to see why. The creamy peach aromas and buttery texture of this wine are reminiscent of a young burgundy, not to mention the slight oaky notes as a result of its four months barrel-aging. It’s got its own distinct character though, with a youthful vivacity and freshness.

The first of our reds was a Touriga Nacionale, a grape cited by Decanter magazine last year as a ‘rising star’. It may be best known as a grape used in port, but on its own in an unfortified form it draws much comparison to cabernet sauvignon. Terra D'alter Touriga Nacionale is deliciously easy-drinking, though not without substance. It’s bold and full bodied, with notes of brambles, plum and vanilla. 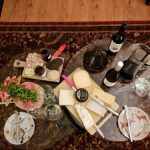 The winner for me though was our final wine, the Terra D’alter Tinto Reserva, made from a blend of Alicante Bouschet, Petit Verdot, Tinta Caiada and Trincadeira grapes. Perhaps one of the reasons I loved it so much was due to the fact that despite 2017 being the vintage selected for the tasting, I’d somehow managed to end up with a bottle of the 2015! Indeed, both Chris and Peter said of the 2017 that while it was ready to drink now, it could benefit from being left for a couple of years. The wine I drank really tasted like a wine at its peak, its complex flavours perfectly balanced. The red fruits on the nose gave way to spicier, deeper notes, and the wine’s velvety mouthfeel made it dangerously easy to drink!

Spending an evening drinking wine on Zoom is always a fun way to curb the lockdown blues, but to be actually learning something while doing so gives the endeavour a bit more of a sense of purpose. Plus, it makes it a whole lot easier to chat to winemakers in other countries. While of course I eagerly anticipate the day when I can join friends in a bar for drinks, if certain aspects of the ‘new normal’ are here to stay, I sincerely hope this is one of them!

After enduring struggles which would have broken lesser restaurateurs, Stuart Muir and Paul Brennan are delighted to announce that Dine Murrayfield opens its doors at 0830 on Friday 11 December, for breakfast, brunch, lunch and, when the Scottish Government starts following the science, dinner. The menus are great and the place looks stunning. Good luck guys.