Last week we looked at a couple of walnut based sauces of Middle Eastern origin. Although the tahini was used to dress a carrot salad, it could easily be used as a dip. That needs something to spread it on. In a horrible culture clash we are as likely as not to serve such dips with nacho chips. While I’m not precious about these things, it should be pointed out that you are travelling 7500 miles for the second component. Today I want to look at a couple of breads from nearer the source.

Ask many people in the UK about pitta and they will believe it to be a flat bread. This is a sad indictment of the ghastly stuff sold in packets in supermarkets, with a consistency resembling reinforced cardboard. Freshly made pitta is light, puffy and crisp. It does soon subside, but will leave a pocket which can be stuffed with any number of good things. The finest example I ever had was in a back street restaurant in Turkey where it was made to order on a hot plate by a wee boy who couldn’t have been more than 10.

It’s easy to forget that domestic ovens are relatively new things. You can make today’s taboon in an oven. I’m suggesting the traditional pan method here, and an oven version for the pitta, but you can change as you wish. Finally, a word about the spices and toppings. Ten years ago you couldn’t find za’atar, sumac or nigella seeds for love nor money. The first can be found in most decent supermarkets. It’s a Middle Eastern herb mixture, its composition varying slightly from place to place. The principal component is generally dried thyme, mixed with oregano, toasted sesame seeds and salt. Its flavour will be familiar to those who use Mediterranean mixed herbs. Sumac, on the other hand, has a unique flavour. It is a dark red powder made from the dried fruit of the plant, and has an unmistakeable lemony tang which hits the taste buds at the back of your mouth.

I write this on the day The Apprentice returns to our screens. There is always an episode where the candidates are sent shopping for obscure ingredients. For many years, nigella seeds have been on the list. They are not the same as black onion seeds (though the latter are a decent substitute). They are one of the world’s oldest known spices, samples having been found in Tutankhamun’s tomb – though no one knows why. They are the seeds of nigella sativa and have an oregano like note. In his pitta recipe Paul Hollywood adds 20g of them to his mixture. I’m keeping mine plain. 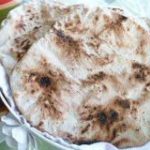 Mix all the dry goods in a bowl. Add three quarters of the oil to the water and mix together. Proceed as per normal bread to form a dough. Tip out on to a floured surface and knead for 10 minutes. (You may need a little more flour.) Put the dough in an oiled bowl, ensuring it all has a light coating of oil. Cover and leave to prove for up to an hour. (As this is a flat bread, you don’t need the longer prove.) Knock back the dough three or four times while in the bowl, then transfer onto a floured surface and divide into 8 pieces. Form each piece into a ball, and roll each one to a thickness of about 3 mm. Place each circle on a lightly floured surface. Sprinkle lightly with water and top with the za’atar and sumac. Leave to prove for a further 30 minutes.

To cook, place a large heavy frying pan on a high heat. Add a tiny drizzle (1 – 2 tsp max) of vegetable oil. When the pan is very hot, add a circle of dough and cook for about a minute until brown spots appear on the base. Turn and cook for a further minute. Cover with a damp towel and keep warm while you make the others. Alternatively cook in an oven at maximum heat in which you have put an upturned roasting tray and heated for at least 20 minutes. They will need about 5 minutes, but keep a close eye on them as they burn easily. 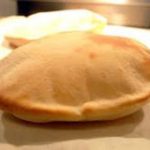 Mix the dry ingredients and the olive oil together. Don’t let the salt touch the yeast – they are natural enemies. Mix the water in gradually as above to form a dough. Knead on an oiled surface for 10 minutes, then leave to rest in an oiled bowl. Prove until doubled in size.

Pre heat the oven to maximum and put a baking tray or stone in to heat up for at least 20 minutes. Tip the dough on to a floured surface. Knock back and form into 4 to 6 balls. Flatten and shape with your fingers. Typically a pitta bread is oval, 50 mm – 1 cm in thickness.

Take the tray or stone from the oven, dust with flour and lay the pitta on it. (You will probably have to do these in batches.) Bake for 5 – 10 minutes, until each pitta has puffed up and is just beginning to brown. Wrap in a cloth and allow to cool slightly. These will not keep.