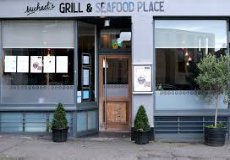 What’s in a name? This place was launched about 4 years ago as Michael’s Steak & Seafood Bar. I’m not sure when or why it changed its name. It smacks slightly of the People’s Popular Front changing its name to the Popular Front for the People. Since lunching here, however, I may have discovered the reason. I have just read that a new Michael’s Grill & Seafood Place has opened its door in Eyre Place, next to New Chapter. This will be the third venture for the energetic Mr Neave. Branding: a chain in the making? He opened his first restaurant in Old Fishmarket Close seven years ago, at the ludicrously young age of 21. This column reviewed that warmly back in 2016.

I had eaten here solo a couple of times. All fine, with just a few issues. A handy location, no doubt attractive to tourists, and very convenient for the in-laws arriving on a train from the west for our annual knees-up in the capital. The décor has changed to a sort of Farrow & Ball teal. Striking, but less striking than the fact that at one o’clock on a Saturday ours was the only table occupied. Things did pick up, but the first doubt was setting in.

In restaurants with great service, team work is key. Not entirely on display here. Our waiter was struggling to open a bottle of prosecco (one of these fiddly ones where the cork is too flat to get a proper grip on it. Assistance from his more experienced lady colleagues? Nope, they stood behind the bar laughing at him. Hmm.

To the food. The dictionary definition of seafood is anything edible  obtained from the sea, including fish and crustacea. I can’t criticise this place for leaning towards the latter – many do – but be warned that out of a fairly extensive menu there are only two main courses which are fish alone. Starters included a generous helping of scallops (three big ‘uns). There is nothing wrong with a good salsa verde, but when all you can taste is mint and basil, the point of the dish is somewhat missed. If that was generous, chef Scrooge was in charge of the Thai crab cakes. And chef Scrooge has never been east of Musselburgh. In the Thai style these are quite distinct, round and flat. The texture is a little unusual but you expect the zing of spring onion and lemon grass and some eastern herbs, with some chilli on the side. To say nothing of the taste of crab. There arrived two small ping pong ball sized spheres of Lord knows what. Crispy ochre things with a thick crumb coating and accompanied by that well known Asian classic, celeriac remoulade. I like the revival of prawn cocktail. Decent enough examples here in the sense that the prawns were of a good size and there was a well made Marie Rose sauce. They were indeed, as advertised, topped with a shell-on jumbo prawn. The only trouble is that here was a serious risk of frostbite while shelling the thing, and prawns that cold, no matter how good, have zero flavour.

Mains? It gets worse. Plenty of beef emanates from the grill too. Nothing inherently unreasonable at £28.50 for a good sized ribeye (chips included): nor did I grudge the three quid for the thimble of Béarnaise. But I would expect my meat (especially ribeye) to have a bit of flavour, and I didn’t notice the usual marbling of fat which contributes that. Now it really got worse. A beef and ale pie had to be sent back as it was stone cold. Seabass was allegedly filled with sweet potato spheres, crab and mussel’s (sic) broth. Some freshly cooked fish was topped with bits of sweet potato which had been cut out with a melon baller and cooked a few hours earlier with an anonymous sauce. The latter was served lukewarm. I would have sent that back too, but the ladies at the table were more tolerant/daft, depending on your view point.

No one seemed at all concerned by our tepid reception to the indifferent food. I have no idea where Mr Neave plies his trade on a daily basis, but I would wager a substantial sum that it’s not here. The service issues I noticed on earlier visits have exacerbated, and have spread to the kitchen. Unless some better quality control standards are put in place, I fear for the future of the Neave empire.