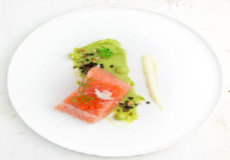 In the food writer’s losing battle against the advances of the waistline, exercise is regarded as a Good Thing. We are fortunate to live within easy reach of the Water of Leith, whose well tended walkway can take you from Balerno to the sea. (You could also go the opposite direction, but why would you?) The only break is just before the Dean Village, where, some years ago, a newly built house displayed an alarming desire to slip down the hill. The fall out, if you’ll pardon the pun, has still to be resolved.

Half an hour or less will see you in the West End. Add another 15 minutes to your jaunt and just past St Bernard’s Well you pop out into Stockbridge. We had nothing planned on the food front, but felt that the healthy exertion justified a nibble. We turned up the hill where, 25 metres on the right, Merienda leapt out and sucked us in. It seemed rather empty, which was a little odd: half a mile along the road, a gastropub owned by a chef with a Michelin star was packed, selling “yer” steak pie and chips for £21. But any vacuum which might have existed in the small, rather elegant dining room was soon filled by the force of nature who greeted us. Leanne gathers you in with the same energy she uses when she races buses on her rollerblades on the way to work along the Ferry Road. A chatty waitress can be an irritant – not here. The girl is a star.

You may not know of owner Campbell Mickel, but he has been in the business for 30 years. He was running the pass (if one can thus describe the minimal space which the kitchen occupies) the day we were there, as head chef was on holiday. He also runs Exec Chef Cuisine, an outside catering company, and for many years worked exclusively in the private catering world. One suspects Mr Mickel does nothing conventionally. Outside catering brings to mind people unpacking plates of cold chicken and bowls of coleslaw. He on the other hand is recognised by the international catering organisation La Belle Assiette. (He was their 246th validation, in case you were interested.) Most people, after suffering a near fatal heart attack, look to take things easier: he, on the other hand, decided he was getting lazy, and Merienda was born. The word merienda is Spanish for afternoon snack, which adds to the confusion. We did not come here for a snack, nor did we want a tasting menu for the third week in a row. We wanted some lunch – in fact, I wanted to eat everything from the various sections of a fascinating menu, which changes monthly. The headings are listed above. 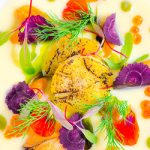 So, to the food. Oh, my ears and whiskers, to the food. Such food. Most chefs these days make theirs look good, but from the kitchen emanated some of the prettiest plates I’ve ever seen. Don’t worry, flavour isn’t being sacrificed for art. Bresaola (air dried beef) isn’t my favourite type of charcuterie, but if it was all this good I could change my mind. Here, slices of top quality meat had the perfect counterpoint of pieces of lightly pickled artichoke. Smoked trout can be difficult to get right, both in terms of smokiness and texture. This offering, apparently from Tobermory, is the best I have ever eaten. The texture was slightly compacted by the smoking, resulting in an intensity of flavour which was in no way overpowered. On cookery programmes I have seen the occasional mad chef (mostly Spanish), who shuns little stripes on the plate, and instead splatters dressing, Jackson Pollock style. It’s the first time I’ve seen it in the flesh, as it were. If I tried this at home, divorce would soon follow. (Leanne says she gets splashed on a regular basis). But when you take some thinned crème fraiche and spike it with a hit of paprika it’s a great complement to the fish, along with cucumber gel for cool, and scorched cucumber for show.  Lobster cocktail is difficult too. It can be served too cold or the dressing can be overpowering. By now you may not be surprised to learn that this was perfect. Belly of pork had been cooked sous-vide and finished under a grill or in an oven. It came with a good barbecue sauce and a side of warm potato salad. No pudding for us, but the best cup of coffee I’ve had in a restaurant in a long while. 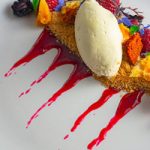 I hope you begin to see (a) how the descriptions are confusing and (b) why you should get yourselves along here as fast as your legs, roller blades or zimmer frames will allow. Yes, order 5, 6 or 7 plates and have yourselves a tasting menu if that’s what you fancy. But you can have a light lunch if that’s your preference. Four plates and coffee cost us less than two steak pies and chips along the road. I know which I prefer. There is no minimum spend: there is no upselling: there is only perfection. It’s casual dining only in the sense that it’s a very nice place and they make you feel relaxed. But to describe the food as casual would be akin to describing a Ferrari GTO as a mere sports car. Only one word can adequately describe this place, and that is the word we used after tasting each dish. Wow!