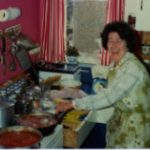 Winter is now officially here. You can tell, because the shops have run out of de-icer just before you get there. And winter, more than any other season, calls for hearty soup. I have it on excellent authority (I heard one of the Hairy Bikers say it on the telly the other day) that we Scots make more soup than any other country in Europe. And what is our most famous soup? Well, it has to be the one we named after ourselves. I was going to say that it’s difficult to get a good Scotch Broth these days, but then it always was. One of its finest exponents was my late Ma, Meg. When I went to Uni in the early 1970s, she wrote me a cook book. While much was tongue in cheek, it contained a great deal of culinary wisdom. I repeat her Scotch Broth recipe almost verbatim, the only changes being (a) conversion from Imperial to metric measure, and (b) giving a list of ingredients. Her own writing style was more Elizabeth David-esque in this regard. I’ve also added some footnotes. 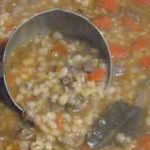 This can only be tackled with the aid of the kitchen scales, otherwise, as it cooks, you will find that the barley and dried peas you threw in so abundantly have taken over and there will be no room in the pot for the vegetables. This soup, therefore, is no challenge[5]– you have to go against nature and be METHODICAL. Boil together the beef and the bone. [6]Skim the liquid, then add the barley and the peas (drained and rinsed) and cook for 20 – 30 minutes. Fish a pea from the pot from time to time and test for softness (or hardness, since you’re an argumentative hair-splitting fella). With restraint – how I hate this soup – you can now add the carrots and the turnip and the onions, neatly diced. Emphasis on neatly, lad, this soup reveals all when dished up. Wipe the tears away [7]and add the carrot, turnip and onion when the peas are al dente but not quite – ma’s logic I think you can follow? Simmer until vegetable are tender.

You will by now have made a pot of very dreary soup, so now for the Johnston abandon – throw in the dried veg, unreconstituted, a chicken stock cube or pot, and a little dried parsley. Simmer the green diced leek for a couple of minutes in a little water in a separate pan, then add to the broth. Taste again and check the seasoning.

[1] The sharp eyed among you will have noted that this is not technically an ingredient, but I have to put it in somewhere without deviating from her text

[2] This is variously known as thick rib or leg of mutton cut. It’s from the shoulder, above the brisket and below the chuck and blade, if that helps. Your butcher will know what you mean (or should). She doesn’t specify size. I would guess 400 – 500g

[3] Be careful here. She used a brand called SWELL, which is now available from health food shops under the name BRAMIK. You can get dried mixed veg from Sainsbury’s or Amazon, produced by Whole Foods. The contents should be carrot, potato, onion, leek, turnip, cabbage and peas. Do NOT use anything which contains peppers, and do NOT confuse this with dried vegetable broth mix. She got the tip from a professional chef, and it does make a difference. Be careful not to use too much as it does swell up alarmingly, hence the original name.

[4] Well, be kind to her. It was hard to get fresh parsley in the 1970s unless you grew your own. Certain types of dried herbs can be very useful. In my view, parsley is not one of those. Use fresh – curly, not flat

[6] My interpretation of this is to put them in cold water, bring to the boil, then simmer for at least half an hour

[7] She meant from the onion chopping