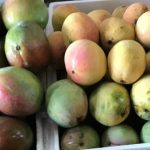 Prominent among the products of J K Rowling's imagination were the food and the sweets beloved of her heroes and heroines. In particular I remember Bertie Bott's Every Flavour Beans. It is significant that the good Mr Bott had no need to create an Every Flavour Fruit. It exists and is called the mango.

Had this article been written a couple of months ago it would have been very different. A pleasant enough fruit. When deciding on which M to feature in the food alphabetical, we decided on mango.

Here in Johnston Mansions we are a great believer in synchronicity. Thus, the topic had been chosen, the guess the subject prize won, and we departed on holiday. To Antigua, to discover we were at the start of the mango season. Of that more in a moment.

Prior to that, what did I know about mangoes? Hmm. Primarily from the Indian subcontinent; the tree is the national emblem of Bangladesh; hellish difficult to get nice ripe ones in the UK. As you might expect, India is by far the largest producer, accounting for nearly half of the world crop. Surprisingly, however, it has less than 1% of the international trade. Very sensibly they scoff most of what they grow. While we are used to the large green ones (which will, if you're lucky ripen to yellow and red hues), they come in a variety of sizes and colours. Not all are sweet: mango chutney, the medium which was the introduction for most of us Brits, is made from sour unripe mangoes.

Many can be put off by the fact that they are fiddly to prepare. First you have to get the skin off. A peeler with a serrated blade is useful. Next comes removing the flesh from the stone -

again, not the simplest job. I've seen all sorts of pictures showing it cut into cubes still on the skin - the so called hedgehog method. For me, peeling it first then a sharp knife along the stone is better. It gives you long pieces so you have the choice of slices, cubes or whatever.

I have heard people go into rhapsodies about this fruit. The Alphonso mango is widely regarded as the king of the species. While I've been to India twice, they weren't in season. I also encountered unripe mangoes in Costa Rica, in a market where monkeys were making great sport using them to pelt passers by from the tree tops. Then we went to Antigua. At the start of the season. Oh my word.

Our hotel usually provided fruit at breakfast, and promised to get some for the following day. They forgot. OK, that happens - you expect these things. What we didn't expect was later that afternoon, as we were having a swim, to see our breakfast waitress arrive at the pool with a bowl of them. That's service.

If you haven't encountered a ripe mango in the country of its growth you have a serious treat in store. The smell - think honey and ripe peaches. Then the taste. Along with honey and peach you get apricot, a little rice pudding and on more than one occasion, I swear, a hint of fennel. They are addictive. Eat one and you can't wait for the next fix. I'm told that parts of the Caribbean can be quite seedy. Not Antigua. Go past a dodgy looking character trying to sell you something and there is a strong possibility he's peddling mangoes.

Future trips to tropical parts will be planned not only with one eye to the weather chart but also to the growing season. As they say in Antigua, the serpent didn't tempt Eve with an apple - he used a mango.