Happy New Year, dear reader. I did tell you that Tom Cooks! would resume later in the month. A couple of reasons for the change. Firstly, we are still within the 12 days of Christmas, so festivities are still allowed. Secondly, I cooked a particularly fine routine masterpiece for the current Mrs J on Hogmanay, which I thought I might share. No doubt you’re resigning yourself to a spell of pit claes and parritch in January: have a blow out before battening down the hatches.

Christmas as we know it is almost entirely due to the influence of Prince Albert in the 19th century. In England, as I understand it, the whole affair was a twelve day debauch. While losing that may not be such a bad thing, we have completely lost the celebration of twelfth night, or Epiphany, a festival marked in much of the rest of Europe. Madam had decreed she fancied fish for her Hogmanay dinner. Accordingly I set off for Welch’s splendid fish emporium on the shore at Newhaven. As was to be expected, there was a large and good humoured queue. They also have a large lobster tank, which can impart appetite and good eating humour, depending, of course, on which side of the glass you find yourself. I was also influenced by the fact that I was, since December 25, proud owner of a bottle of lobster oil, given to me by my sister, who suggested I was the only person she knew who might know what to do with it. At Johnston Towers we like a challenge. And thus this recipe was hatched. I believe you can find these things on line. Pshaw! I say, and pshaw! again. Improvisation is much more fun – lobster risotto recipe, here we come. This is not for the squeamish. The flavour of lobster deteriorates very quickly after death. If you use a creature which has been in a supermarket fridge, you will simply not get the same result. Health warning – this recipe involves despatching your lobster and cooking it at home. If you don’t fancy that, perhaps this is not for you.

There can be problems with  risottos. Unless you are careful, they can be very boring. Here you are adding cooked lobster meat only at the last minute, so you need additional flavouring. The logical thing would be to use fish or lobster stock. Bizarrely, however, you don’t use 100% fish stock when making a fish risotto – the flavour would be too strong. I would normally use chicken stock, but we still have a large amount of the EU turkey stock lake post-Christmas, so I used that. But it is daft to have all these lovely shells and not to use them. It seemed logical, therefore to make a lobster stock. This risotto was made using both types. Please tell me you never dispose of crustacean shells without extracting additional flavour? If you do, there’s a new year’s resolution for you.

For additional flavour you can also use little shrimps which break up in the cooking process. Welch’s had some nice unshelled raw ones which I cut into little pieces and added with a few minutes to go. You can use anchovies or fish sauce (though you have to be very careful with the salt levels). I used oyster sauce which is a little less salty. You do need to cook your lobster in advance.

For the lobster stock

How to prepare your lobster

Firstly, cook your crustacean. Make sure your pan is big enough, and that the water is boiling.  You will need at least 4 litres of water. Rick Stein recommends 150 g of salt per 4.5 litres of water. In his book Seafood he recommends putting the lobster in a deep freeze for two hours. This will stun it before cooking, he says.  No reason to doubt the great man, but if you really believe that that is how seafood restaurants operate, then you will looking forward to the Tooth Fairy and the Easter Bunny. These places would need freezer space the size of their kitchens.

I cannot countenance the thought of putting a live creature into boiling water, but it is easy to kill it quickly and humanely. At the top of a lobster’s head, just behind the eyes, you will see a small ridge. Hold the lobster in your left hand, with its head to the right. Hold a large heavy knife in your right hand with the blade pointing to the right (reversing this, obviously, if you are a southpaw) . Plunge the knife down hard into the ridge, then bring the blade down through the brain. Death will be instantaneous. I warn you that, like a headless chicken, the animal will still twitch for some minutes. Even I find this a little unnerving. I suggest you get it into the pan immediately, pausing only to snip off the rubber bands which will be holding the claws together. For a lobster up to 750 g cook for 15 minutes. Up to 1.25 kg cook for 20. Remove from the water and allow to cool. Take the meat out of the shell. Try to take the claw meat out in one piece, easing out the membrane – it looks good as a garnish on top. Cut the meat into bite size chunks and set to one side. Add the coral (the grey-green meat found in the head cavity) to the pan for the stock (see below.)

Next, make the stock. Soften the shallot over a gentle heat in the oil, in a frying pan large enough to hold the shells. Sprinkle the fennel seeds in, and mix well. When the shallot has softened, turn the heat up to medium, add the shells to the pan and shake around for a couple of minutes. Add the brandy. The classic way of getting rid of the alcohol is by flambéeing. Spectacular, but the flames will go pretty high. Make sure there is nothing flammable within range. Alternatively, let the pan bubble for a few minutes. The same net effect, but safer. Stir in the tomato purée, add some of the water and allow to simmer for a few minutes. You are looking for about 150 – 200 ml stock with a nice concentrated flavour. If you have too much liquid, reduce by turning up the heat. Strain the liquid into a clean pan. Reserve about 50 ml to spoon round the finished dish. Some of the best risottos I have eaten in recent times have had an extra flavour dimension added just before serving. 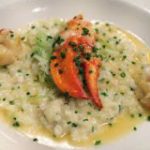 Now the risotto (told you we’d get there eventually)

You make it in the usual way. Soften the shallot, red pepper, chilli and garlic in the butter and lobster oil (if using) over a gentle to medium heat. Add the rice, increase the heat to medium, and stir round for a couple of minutes until the grains take on a slightly transparent look around the edges. (What you are doing is breaking down the starch, so the rice will absorb liquid more easily and swell up.) Pour in the vermouth, and stir until the liquid disappears. (There is a lot of stirring in a classic risotto.) Then add the chicken/turkey stock, a ladleful at a time, plus a couple of shakes of oyster sauce. Add some lobster stock as you go, but remember to reserve some for the end. The rice will take about 20 minutes to cook to perfection. It is done when it is al dente, ie still has a little bite but isn’t soft. About 15 minutes in, add the prawns, some more oyster sauce and some more lobster stock. Check your flavour/seasoning. When the rice is nearly done, fold in the lobster meat (except the claws), being careful not to break it up. Remove the pan for the heat for a couple of minutes allowing the lobster meat to warm through.

Warm the claw meat in the lobster stock pan. Serve the risotto onto warmed bowls. Finish with a good grating of black pepper and a squeeze of lemon juice. Garnish with clawmeat and a sprinkling of coriander. Finally, bring the remaining lobster stock to a bubble and spoon some around the base of your risotto.

I fear I have made this sound quite fiddly: all I can say is that it saw out our year with a flourish.