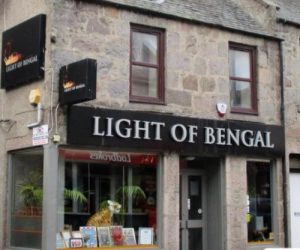 A bitterly cold night in the Granite City brought to mind only one style of cooking: Indian.  Off we set down Union Street and alighted upon this gem of a traditional Indian restaurant.

The usual poppadum and four sauces, together with a pint of Cobra, allowed time to peruse the extensive menu.  It was a full menu but not adorned with the usual multiple, familiar sauces and styles of curry but a good number of interesting off roads.

Chilli pakora were ordered.  What would your reasonable man atop the bus to Heatheryford anticipate?  Spicy pakora. Well, this was five or six red chillies dredged and deep fried in a pakora batter.  Boy were they spicy!

On the other hand, the mixed pakora were a delight.  Chicken in a light tempura, mushroom likewise and a more traditional pakora.  Eight pieces in all.  Very good value at £6.95.

Turning to mains.  Given the experience with the chilli pakora, the chilli chicken korma was awaited with trepidation.  No need.  It was succulent chicken pieces enrobed in a delightful korma sauce with an undertow of chilli, which brought a depth of flavour and gentle kick towards the end.  Lamb dopiaza was deeply flavoured with generous chunks of slow cooked onion.

An accompaniment of a generously sized garlic naan and bowl of pilau brought everything together.

Two beers and a generous tip saw two of us out for £37 a head.

The walk back down Union Street and 70 minutes in the gym the following morning took care of the inevitable feeling we had been very well fed.

David Dickson is a regular guest reviewer. He has been a friend to Tom's Food! since the very beginning. A solicitor-advocate by profession, he appears regularly in the High Court of Justiciary. More importantly, as review editor of the Journal of the Law Society of Scotland, on a regular basis he sends me large packets of books to review. Thanks, again, David.

This is the last regular Tom Eats! of 2022. The next two weeks will have the Review of the Year. Normal service will resume later in January.