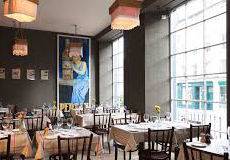 For some reason, French provincial cooking found it hard to establish a solid footing in Edinburgh. Many tried. The Pierre Victoire experiment worked for a little while until the economic realities kicked in. Others started well enough but faded. Some will remember Le Caveau on Dundas Street. I remember amazement at the editors of The Good Food Guide. One year they continued to list it, but the first line of the entry read something like, That rarity, bad French food. 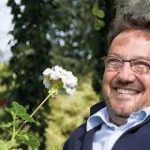 I've now eaten in three French places in the capital in three weeks and can attest at first hand to the fact that that has changed. The most important architect of that change is undoubtedly Fred Berkmiller, co founder and owner of this place, together with his wife, Betty. Fred has been in the town for 25 years now. He set up this place and its sister, L'Escargot Blanc in the West End, within about six months of each other. I'm often asked where I go to eat when I'm not reviewing. The latter is a favourite, whether in the restaurant upstairs or in the downstairs wine bar with a cheese or charcuterie platter. The care that goes into these - different every time - is remarkable. You would be forgiven for thinking that there was a complete bias to Fred's homeland.

Nothing could be further from the truth. He is a huge champion of Scottish produce: indeed he's an Ambassador for Scotland Food & Drink. An enthusiast of the Slow Food Movement, he also set up the Budding Chefs scheme, an exchange programme to assist the development of young pros. He recently established Newton Garden and grows much of what is served.

There are certain drawbacks to dining with Mr C of Mr C's pies fame. One of these is that he knows everyone and is treated like a VIP. Writing about Eusebi Deli a few months ago, I described my problem with the freebies which appeared, contrary to Tom Eats! policy. I rationalised it then, as I did this time, by accepting that they weren't for me and no one knew who I was. The trouble is that everyone, Fred included, knows who Mr C is. Still, no sign of the former today - we're safe. Ah well, read on.

In best French bistro style, there is a blackboard with a lunch menu, changing regularly. There will be a soup of the day, and a fish of the day. There will virtually always be a terrine or a variation thereof. It takes you back to the halcyon days when it was virtually impossible to eat badly in France. Moules marinières were, unusually, made with red wine. Not a combination I've tried before, but it really works. The dish was, of course, enhanced by containing the plumpest, sweetest mussels imaginable. Rabbit rillettes were of a traditional consistency, soft (so often in this country this dish is made no differently to a terrine). An extra grain or two of salt would have improved them. We were so busy engaging in our usual disjointed banter about food, the world, food and the universe, that we almost failed to notice the estimable Mathieu sneaking up with the first of two extra courses. Fred has spotted Mr C's reservation. A dish of sizzling snails arrived. Perhaps appropriately, given the name of this establishment, the butter was flavoured with blue cheese rather than garlic. Blue cheese in general is not something which is to Robert's taste, and I found it a little strong. 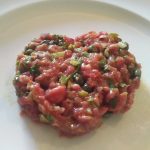 You will find steak tartare on the a la carte menu. Not entirely uncommon, but this was a nod to the days of les grand hotels, as opposed to bistros. The trolley of ingredients, the dish mixed and served in front of you. Everyone who savours this dish, ie not the ones who ask for it cooked medium, has his or her own preferred blend. For freshness and flavour this was hard to beat. 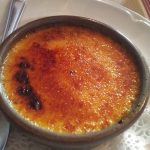 Back to what we had actually ordered. Here I have to pause, reread the menu and purr. A dish of wild rabbit came with a rich unctuous sauce (grand veneur, according to the menu). This is made of wine, stock, redcurrant jelly and sometimes dark chocolate. Confit of Shetland lamb was served with fennel and a light chilli sauce. To confit something, you cook it slowly in fat. Even though we knew the theory, we were both in the dark as to how this plate of perfection was actually realised. It takes a lot to shut us up, but these two plates succeeded. I have no idea how a certain dining companion found room for dessert. Crème brûlée, apparently, is a must not pass pud. I manfully stole a spoonful. The best ever. Made with duck eggs, said Mathieu, helpfully.

I may have had better French meals in Edinburgh, but certainly not in the lifetime of the Tom Eats! blog. And the service? Well, Toto, I guess we're not in Paris any more - hence the perfect score.