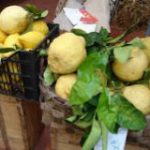 Taken for granted by many whose only use for it is to garnish a G & T, the lemon is an underrated kitchen essential. A cooking tool, to prevent your butter browning further when frying fish or chicken; a fundamental in most Middle Eastern recipes; an invisible flavour enhancer to add that little extra zing to finish any number of dishes. Most serious cooks would regard the lemon as a staple.

I have just returned from Sorrento on the Amalfi coast, where the lemon is more than that – it’s a central pillar of the economy, coming second only to tourism. While Amalfi lemons are available all year, they’re at their peak about now. For me, they just shout summer. I’m very grateful to this week’s guest contributor, Nigel Eastmond, one of two passionate cooks who blog under the soubriquet The Nosey Chef. Their love of cooking has widened to research the background and history of the food they cook. In other words, men after my own heart. We’ll come back to Nigel’s lemon ice cream at the end. It’s a stonker. If you have time for only one recipe today, go straight to that. But first, a couple of simple summer things to do with lemons.

For any recipes involving lemon zest, use unwaxed lemons if you can. Otherwise give the fruit a good scrub. You’ll make your life easier if you have a tool which can remove the zest in tiny strips. Failing that, you can use a sharp potato peeler, then cut it very finely. Make sure you get rid any of the white pith, as this will give a bitter taste. 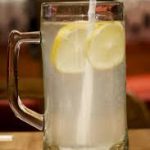 This really is laughably simple. The only point of a recipe is to give you a guide on the lemon:sugar ratio. Alter it to suit your taste.

Ingredients (this will make a base to produce about 1.5 litres in total)

Remove the zest from four of the lemons with a zester or peeler. It is important to remove the white pith, as this will make your drink bitter. Put the zest in a pan with the sugar, water and juice of all six lemons. Heat the water gently until the sugar dissolves. Allow to cool then leave overnight in the fridge. Top up with very cold water, still or sparkling as you wish. Serve with a slice of lemon and some mint leaves.

If you don’t have an ice cream maker, a granita is the next best thing, and really easy to make. It will have bigger ice crystals and is really refreshing in summer. Make the lemonade base from the previous recipe. Allow to cool. Pour into a wide Tupperware box or metal tray and put in the freezer. Once it is starting to freeze (this will take about two hours), take a fork and scrape the mixture. Repeat every hour or so for about six hours. Cover with a lid or cling film. This will keep for ages.

Sfusato Amalfatino are the famous spindle shaped lemons from Italy’s Amalfi coast. Amalfi is strongly associated with lemons – Amalfi and the lemon are like childhood sweethearts who grew up together, got married, and spawned a legacy of a thousand zippy dishes. And, Amalfi is, of course, the home of limoncello – that vodka-based digestif that Nonna Maria is said to have invented in the 1900s

The history of the Amalfi lemon is interesting to anyone trying to follow authentic Amalfi recipes using produce from elsewhere. Amalfi lemons are not genetically 100% lemon.

Like a lot of things, lemons probably arrived in Italy from the Middle East, and these lemons will have been very like the ones you can buy in a British greengrocer. The lemons were cultivated easily because of the peculiar way in which cool sea air becomes trapped in the steep-sided valleys of the Amalfi peninsula, and creates a climate that is perfect for lemon trees. Sorrento still grows this older lemon variety.

However, on the southern coast of Amalfi, the lemons were crossed with local oranges to produce the spindly sfusato lemons depicted in the mosaics of Pompeii. In the area these days, you can find both traditional, elongated sfusato Amalfatino, and the shorter, fatter limone di Sorrento.

Nigel tells me that this inspired recipe came about when he made too much mixture for a lemon tart and decided to turn it into ice cream, to stunning effect. It does involve raw eggs, so is not recommended for expectant mothers. Stamped British eggs are safe these days, but Nigel counsels against using those bought at a farm gate. 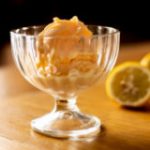