This week's column was inspired by finding a puddle of creamed leeks hiding below some slices of beef at The Peat Inn, the subject of next week's Tom Eats! column. I am very fond of leeks, but it occurred to me that my use of them tends to be in leek and potato soup, for which I have a wonderful recipe which elevates it far above the norm. Some research was in order. Escoffier, interestingly, gives only two recipes, one for soup (not vichyssoise), the other as an hors d'oeuvre. Curious. Yet they've been around for millennia. The Romans, who probably introduced them to Wales, believed that they improved the voice. Emperor Nero, it is said, had leek soup served to him daily to improve his oratory. To get to the root (sorry, it just slipped out) of this I turned to Jane Grigson. She explained that use of leeks virtually died out in Britain for nearly three centuries. They are difficult to clean unless you have a good supply of running water - a rarity in most kitchens in Victorian times - and many shared the fear, expressed by Mrs Beeton, that they would "taint the breath" unless "well boiled", ie overcooked. They seem to have come back into favour only in the second half of the last century. Many of their uses as a vegetable can be fairly dull, but, prepared well, they can be a triumph. I pondered long and hard on which recipes to include. Vichyssoise and Leeks a la Grecque are two of the classics; however, looking out of the window at the driving rain, I don't think it's quite the time of year for a chilled soup and a cold hors d'oeuvre. Today's first dish is one of the more interesting gratin recipes I've come upon. The second is a fascinating medieval recipe updated by Mrs Grigson. 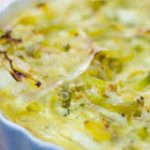 Gratin of Leeks and Ham

Preheat the oven to 190˚C/Mark 5. Put the leeks, butter and lightly salted water into a heavy pan. Bring to the boil, cover and cook until the water has almost entirely evaporated. Then lower the heat and stew for 20 - 30 minutes until the leeks are very tender. While the leeks are cooking, beat the eggs together with the cream and season with salt and pepper. Butter a baking dish large enough to hold the leeks in a single layer. Wrap each leek in a slice of ham. Place in the baking tray. Sprinkle with the cheese, if using. Bake for 30 to 40 minutes until brown and heated through. If you like, you could substitute a béchamel or cheese sauce in place of the egg and cream mixture

Fry the leeks in the butter until soft. Add the mushrooms, stock, saffron, ginger and sugar, and a little salt. Cover and simmer for a few minutes until the mushrooms are cooked. (*Here the recipe recommends adding the beurre manié a little at a time to thicken the sauce. My preference would be to strain off the juice and reduce over a highish heat before pouring back into the pan.)