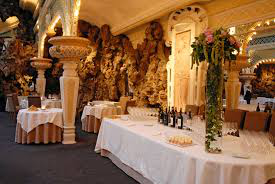 In the absence of restaurants to review, Tom Eats! has once again had to deploy its imagination. In the last lockdown, there was the occasional raiding of the back catalogue. Greatest hits are all very well, but, being frank, it's more fun when you can be justified in writing a complete stinker. This review from 2018 highlights the worst waiting service we have ever had. I have never given a score of 0/5 for service before or since. The irony is that Le Chapon Fin has been there for nearly two centuries. It is (well, was) regarded as much of a symbol of luxury in Bordeaux as The Savoy in London.

The place was established in 1825. The dining room, remodelled in 1901, is remarkable. Huge chunks of limestone, and mirrors with rococo features, make a room quite unlike any other. First impressions (of the room) are jaw dropping. They are, however, very brief, as we are immediately thrown out. Our reservation is for 19.30. We arrive at 19.28. No one is on duty in the narrow reception corridor, so we go into the dining room. Out! Out! screams a harpy.  We find ourselves back out faster than you can say your name's not on the list, guv. (I have checked the Boys' Own Book of Hospitality. It suggests that a more appropriate response might have been along the lines of, Terribly sorry, we're just finishing set up. Could we ask you to wait outside for a moment or two?)

We are graciously readmitted two minutes later. The dining room does not seem to have changed, but my mood sure has. And suddenly the pace accelerates to that of a Benny Hill sequence. A leisurely glass of house fizz (well, as leisurely as an 18€ glass can be) should have been time for meditation and forgiveness. Instead, we were bombarded with constant chatter introducing bits of very ordinary food. NOT amuse-bouches: of that more anon.

Two skinny and unremarkable cheese straws were presented vertically, held aloft in a glass of dried lentils. A square of stale black toast was topped with something fishy. A bowl of brown and black stone like things appeared. Difficult to know what to put in one's gob. We guessed correctly with a couple of black, fried prawns. (The brown things were indeed stones.) The menu also featured black gnocchi. Chef must have been offered a job lot of squid ink. A tiny flan with chorizo was OK, but a melon ball in a shot glass with a spit of indeterminate foam ain't my definition of refined modern cuisine.

The service was split into two camps, divided by gender. The men dealt with the wine, in particular two charming sommeliers, from Montreal and California respectively. Then we had the rest. The bouncer double checked which of us had the cream allergy. To quote her exact words, as she pointed an accusing finger at L, YOU’RE the one with the cream allergy. I’ve NEVER heard of that. Two minutes later, the amuse bouche proper arrived, some crayfish smothered in a potato mousse - utterly delicious.  L had the first forkful down her neck before we realised that the mousse was about 50:50 potato and cream. The dish was whipped away with a mumbled apology. Some bread and butter appeared. There was, as one might expect in an establishment of this alleged quality, a butter knife; however, the absence of side knives for the convenience of diners seemed odd. Had the kitchen perchance developed self-spreading butter? Un couteau? we timidly enquired of our charming hostess. You want ANOTHER one? she snapped. No, dear, we want two, as neither of us has been graced with one. Had we been so gauche as to use your butter knife, we know that you and your black skirted chums would have been sneering and sniggering at the dining habits of les rosbifs. There was no immediate sign of an alternative amusement for L’s bouche, but she was provided with a fork and knife. I've never eaten ice cream thus, but those were the implements deemed appropriate for a savoury ice cream with onions and tiny squares of tuna. By this time we were far too frightened to ask if they could spare a spoon.

To the main event. Before being subjected to the full delights of service, we had ordered one of the three tasting menus, described as Confiances (Trust). Ah, if only we knew then… The first of five courses was foie gras. If you disapprove, good for you, but we love it. Indeed we had had a very fine free sample at a food fair outside the station the day before. Significantly better than the sweating, slightly slimy, specimen placed before us. L had to pick a vein out of her portion. There was a foam (refined kitchens in Bordeaux apparently use a lot of foam) based on some sort of liquorice type plant. Deeply unpleasant. Foie gras needs pickle or chutney, but preferably not one which is so vinegary you could use it to clean the silver. It needs toasted brioche, not a cracker made of tapioca and, you guessed it, squid ink. I made no complaint, but when the waitress asked what I thought, I told her what I’ve just told you. By this stage we really, really hated one another.

Sea bass came with a beurre montée. Those of you who know about these things will know that this is quite creamy in appearance. The fish was lovely, perfectly cooked, but unseasoned. Concerned by our cream experience, I sought reassurance, asking them to confirm the absence of the vomit inducing substance. The response could not have been more vitriolic had I just made an indecent proposal. We took their word for it. L made her second of three unwanted inspections of the ladies’.

Filet mignon of veal was tasteless and unseasoned. It came with a well made jus, which mixed strangely with a strip of spicy tomato ketchup and three dots of red pepper coulis. An extensive cheese selection was pretty decent. A culinary first for me – a French cheese board featuring an English cheese. I didn't come to Bordeaux to eat Stilton, but one black mark deducted. They saved the best to last with a rather good raspberry dessert.

We passed on coffee. L was feeling ill and just wanted out. Relations had thawed a little over my appreciation of the cheese board - truly this waitress is a magnanimous lady - so we were brought some petit fours. A couple of bits of watermelon. Hmm. A very good mini lemon pie for me, and some over ripe strawberries dunked in chocolate of average quality. I recall making these with my daughter when she was 8. That wasn’t refined cooking then, and it’s not now.

As recompense for poisoning L, they kindly comped the champagne. Negotiations regarding the remaining 324€ are ongoing.

PS Since this review was written, we lodged a complaint, and have been given a full refund. Nothing, however, could compensate for service of this quality.