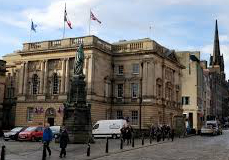 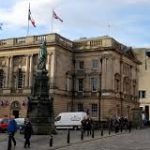 It’s now a couple of years since the French Institute relocated from Randolph Crescent to this handsome building in the very heart of the Old Town. Standing at the corner of George IV Bridge and Parliament Square this was once home to Lothian Regional Council Chambers. (I describe it as handsome: in their book The Buildings of Scotland -  Edinburgh the authors describe it as flabby Palladian. What do I know?) Technically the address of the Institute is West Parliament Square, but you enter the bistrot from George IV Bridge. If the aim of such an organisation is to spread the knowledge and influence of your country, and if you are French, it makes sense to incorporate food. I believe that Randolph Crescent once housed a charming little bistrot (to use the French spelling) but I never had the chance to visit.

First impressions? Busy isn’t the word. On a Saturday lunchtime, buzzing is more like it. And they have imported another cultural icon from France – the supercilious waiter. A couple of weeks on, I suspect the young couple who arrived ahead of us are still smarting from their humiliating rejection.

Paris as it used to be. Our quintessential Gallic charmer turned out to be Greek. Having seated us, he ignored us for 20 minutes, then inexplicably morphed into a very pleasant individual. Better late than never, but a point had already been deducted.

The menu is classic French bistro fare, at quite breathtaking value. A two course lunch for £13.95. It couldn’t be France without a terrine. Pretty good, if lacking a little seasoning for my taste. The assiette of charcuterie, astonishingly, didn’t attract a supplement. If the generous board of classic meats isn’t up to the standard of, say, L’Escargot Blanc, it’s not trying to compete at that level, and is a fraction of the cost. When you see chicken breast on a set lunch menu, you are expecting some portion control. Instead, one of the biggest and best supremes de volaille imaginable. With not just any old mushrooms, but morels. A delicate cream sauce and sublime mashed potatoes. If I had cooked it, I’d still be bragging about it.  A Shepherd's Pie can be a dull thing: in this case the addition of Comté cheese elevated it above the ordinary. 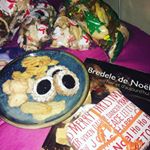 The restaurant is operated by Patisserie Maxime. I don’t have a particularly sweet tooth, but I defy anyone to pass their premises in Queensferry Street without pausing to goggle at the range of confections on display. Paris in the West End. The range of cakes on offer here looked pretty impressive too, including Paris Brest, a particular favourite. (You’ll find a recipe in Tom Cooks!)

For me this is a lunchtime pla 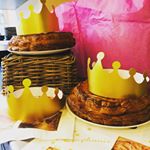 ce. At night, as you would expect, prices rise a fair bit. Not to exorbitant levels, but just to emphasise how much of a bargain you get during the day. It’s not a place which will be knocking on the door of M. Michelin; it’s not a place for an express lunch; but if you’re looking for a good evocation of somewhere in France that you dimly remember, at prices which will delight, I commend this to you. But don’t forget to book. Bof!

A final piece of trivia. Cross George IV bridge to the bank opposite and look back at the pediment above the building, in particular the carved figures. Look from left to right and be appalled by the head on the right hand figure. The story goes that during restoration work a stone mason accidentally decapitated that figure. His unscrupulous boss told him to hack together something vaguely head shaped and stick it on. The owners didn’t notice and the full contract price was paid. I have no idea whether or not there is a grain of truth in that, but the evidence is there.