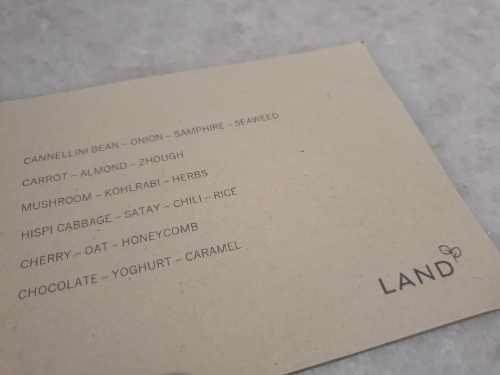 When thinking of Birmingham’s architecture, you’d be forgiven for conjuring up a mental image of sprawling concrete and post-war brutalism. And, while that’s true to an extent, there are pockets of Victorian elegance, one such being the Great Western Arcade, just off Colmore Row in the city centre. It’s home to a selection of independent boutique shops, a delicatessen, wine merchant, bars and restaurants, including newly reopened vegan fine dining establishment Land. I’d passed it a while ago, pre lockdown, and thought it looked lovely, making a mental note to try it sometime. I feared I’d missed my chance though, as they announced online they were stopping their lockdown “Land at Home” boxes in April and to wait for news of their reopening. As the world began to slowly open up (again) back in the summer, Land’s premises in the Great Western Arcade looked decidedly shut. We all know how much restaurants, especially small independents, have felt the effects of the pandemic and I worried that this was another small business that hadn’t made it through.  I needn’t have  though, as after a successful crowdfunding campaign, Land reopened in a new location, still within the arcade.

Not knowing many vegans (nor am I one myself, which those of you who’ve read my previous reviews will probably realise) it was a bit tricky to find someone to go with. However, one of my friends who’s pregnant was struggling lately to find restaurants she could actually go to and enjoy - you don’t want to pay restaurant prices for a steak only to ask for it well done, endlessly quiz the waiting staff on what exactly is in that sauce, or watch all your friends eat sushi while you sit with a bowl of plain rice. Luckily, vegetables are pretty safe, so the two of us went to Land a couple of Fridays ago. (She also drove since she wasn’t drinking, for obvious reasons - thanks Jen.) 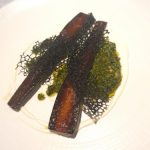 A starter of cannelini beans with samphire and a black onion puree had a beautifully silky texture, the onions giving a bittersweet bite to the dish. Next up was a dish of slow roasted carrots with a crispy almond tuile, on top of a home-made zhoug. I won’t lie, I had not heard of this middle-eastern delicacy before, and in case you haven’t either, it’s pronounced “zoog”, hails from Yemen, and is a pesto-like dip made from parsley, garlic, green chilli and other middle-eastern spices. It was quite delicious, lending a real zing to the almost caramelised carrots. Wild mushrooms with kohlrabi and herbs sat in a broth with a depth of flavour people like me can only attempt to create with a rich beef stock, and had a gorgeously balanced mix of tastes and textures. The only weak link on the menu was the hispi cabbage with satay, chilli and rice. A mound of shredded cabbage was topped with puffed rice, drenched in satay sauce then drizzled with something closely akin to sriracha. It wasn’t completely dislikeable, but a bit acidic and the lashings of satay sauce drowned out most other flavours. 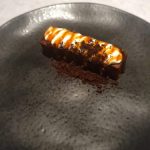 The first dessert of cherry, oat and honeycomb was a refreshingly light ensemble of poached cherries, cherry sorbet, oat-milk ice cream and crispy oats and pieces of vegan honeycomb. And, in case you’re wondering, no honey isn’t vegan, it’s made by bees, but vegan “honeycomb” aka cinder toffee can be easily made with plant-based ingredients. The second dessert, described simply as “chocolate - yoghurt - caramel” was a fabulously decadent brownie-esque bar topped with an oat-milk yoghurt and drizzled with caramel.

I’d encourage anyone, whatever their dietary choices, to visit this restaurant. The flair and expertise with which the dishes are cooked and the sheer array of flavours make for a fabulous dining experience. And, since vegetables are less expensive than meat, with a six course tasting menu at £36*, for this level of cooking it's as cheap as (oil-fried) chips. Matching wines are available for £29, and there’s a good selection by the glass and bottle, plus beers and soft drinks. The venue is lovely too, with tables that look like marble but are actually made from recycled plastics, lush dark green and muted grey interiors and an open kitchen. It was definitely worth waiting for Land to reopen, and I’d defy even the most committed carnivore not to enjoy a meal here.

* This is not a typo. The prices have gone up recently. Miranda says it's still amazing value.