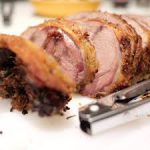 On many dinner tables this Easter Sunday, there will be a roast. Not as large as if the family was coming to visit, but lots of you will maintain a traditional feast on a smaller scale. And for many, perhaps even the majority, that will be sheep meat, almost certainly lamb. That’s a very fine thing and, of course, full of religious symbolism. But just don’t think that by eating it you are doing a darn thing to support Scottish farmers.

A quick agricultural lesson. Lambing time is about now, March/April. In Italy, particularly in Rome, they slaughter very very young lambs, which are still at the suckling stage, to make the classic abbachio alla Romana. That’s a great dish, but it’s not our practice. A lamb is technically a sheep up to one year old; however, most of what we eat as lamb here is three to six months old. I am told that there are a few places down south where  the lambs arrive very early in the year, but not up here. So do the math, as they say Stateside. Even with a late Easter there is not a snowball’s chance that what you are putting on your table comes from Scotland. Instead, a Scottish Easter is bringing large smiles to New Zealand sheep farmers. So, enjoy your agnus Dei representation this weekend, but put a note in your diary for July, August and September. 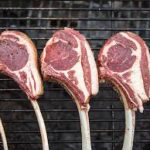 July, a massive pan full of tiny sweet chops. In August, a warm Sunday (a flight of fancy, perhaps, but I confidently predict a long hot summer), a leg butterflied, marinaded and cooked on the barbecue. In September, as autumn approaches, a shoulder slow cooked on a bed of onion and potato (see a recent Tom Cooks! for a recipe). Or, post isolation, getting friends and family round a table to tuck into a roasted leg, studded with garlic and anchovy and perfumed with rosemary. All from Scotland. 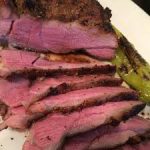 I am glad to see that mutton is making a comeback, if you know where to find it. I love the depth of flavour you can get from the meat of a sheep aged two and over. Or hogget, the half way house. This is a sheep between one and two years of age, with more flavour than lamb, but lacking the strong, almost gamey flavour which puts some people off mutton.

Whisper this heresy very quietly, and don’t tell anyone I told you: it is possible to get quite decent beef steak in supermarkets these days if you’re careful. But for lamb, it has to come from a good butcher, who will not only be able to explain the provenance, but will be able to tell you what to do with every part of the animal. There is so much more than roasting and grilling.

Happy Easter – and the equally happy anticipation of lamb feasts in a few months.

On The Side will return at the end of April.