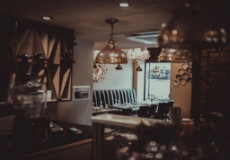 A few folk have picked up on last week’s car crash of a review as being symptomatic of what they call the great Italian rip off. I certainly don’t defend a place which achieves a record low score (8.5/25 in case you missed it), but please don’t let this put you off Italy in general, and Sorrento in particular. Having done no research before travelling, I had no idea what to expect. For some reason I was anticipating a long esplanade, leisurely strolls with moonlight views. Instead, the spectacular cliffs of the coast offer no relief for the town, steep and winding paths leading down to two fairly small port/marina areas.

The singular beauty of the place makes it exceeding popular, which in turn means lots of facilities for visitors, including more restaurants than you shake a breadstick at. It’s worthwhile making a recce on the first day (especially when there are no cruise ships in the bay) and noting the particularly busy establishments. Even in high summer, word of quality soon gets about.

I do occasionally wonder if blogs about foreign parts are of use, but I was this week contacted by a reader whose son was en route to Sorrento. Having told him where not to go, here are some better options.

L’Abate was one of the places which grabbed our attention by virtue of queues for a table later on in the evening. There is a large front terrace, and a larger dining room inside. The terrace was too close to traffic fumes for us, so we chose to eat in. While outside areas are great for people watching, that’s my preferred pastime at aperitivo time. Once inside, this is a truly fascinating venue for waiter watching. All server life was here. On our first visit the man looking after our table had kindly eyes atop a tired body. He was, however, assisted by a couple of turbocharged youngsters. They also occasionally went to the aid of a vastly obese colleague. (How can you walk 10 miles a day and still be fat?) The man with a jacket? He must be important: sadly, not very competent. Probably a younger brother, the family code having dictated that a role must be found. (Were this the Corleone family, he would be Fredo.) Working the front terrace were two waiters (one of each gender) of the type my wife would describe as eye candy, no doubt intended to entice customers in and to lure extra  tips from the lascivious. Boss man had no jacket. He and I eyeballed each other a bit at the outset. I ordered fritto misto della casa, clearly stated on the menu as being mostly veg, aubergine, crisp little pieces of dough or pasta and, most gloriously, courgette flowers stuffed with ricotta. You want calamari and prawns, he said. No, I replied in my best Italian, I want the dish listed on your menu, wot I’ve just ordered. As it was our last night I also chose an expensive bottle of red, and normal relations were resumed. Over two visits we ate very well. Good grilled fish, decent lamb, a remarkable pasta dish of candele (large pasta tubes) with meatballs and a slightly sweetish sauce, advertised as “sweet sheep cheese”, but featuring some type of squash, I think. Much better than it sounds. But the highlight, by a country kilometre, was the Delizia di Limone di Sorrento. This was vaguely related to a rhum baba, soaked in lemon syrup and booze, filled with a crème p?tissière and coated with a lemon cream. As good a dessert as you could hope to be served by St Peter come the day.

The menu is huge, but they seem to cope. They’ll do you a pizza if you want, plus most of the standards, but don’t miss the two pages of house specialities. Winners all. The name (translation, the abbot), in case you were wondering, seems to derive from some local holy man or other. The walls have all sorts of prints and etchings featuring him. The detail escaped me, but with an organisation as slickly run as this, there seemed to be no need of divine assistance.

Other places we ate in-

I have read of the sisters described as The Terrors of Sorrento, and The Five Fawltys. The reviews are either wonderful or terrible, with nothing in between. This is a ramshackle place on the sea at the inappropriately named Marina Grande. We found it on day one, had a drink, then a wander and came back for some good pasta and excellent fish, at a fraction of the prices being charged nearby. Owner watching, one might, being generous, describe the ladies as eccentric.

Run of the mill place upstairs on a terrace above one of the main shopping streets. Family owned. Perfectly acceptable if unremarkable. Interesting pasta starter of ravioli with spinach, walnuts and cream.