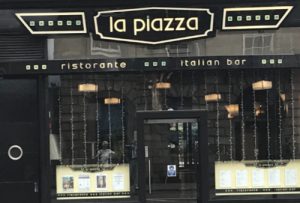 A caricature is a curious and potentially powerful thing. Those anonymous looking chaps who appear with their easels around tourist destinations have remarkable talent. To create a mere likeness would be beyond me - but they have the perception to see, recreate and accentuate all within a few minutes.

And, in some ways, caricature is something the restaurant business thrives on. Go anywhere outwith our borders and enter, if you dare, something called a Scottish Restaurant. Haggis bon bons - check; tartan trimmings- undoubtedly; an invitation to have a wee dram - of course. Is that OK or to be abhorred? When it comes to eating out, provided the setting isn't too obnoxious, I do my best to be influenced mainly by the quality of that which emanates from the kitchen.

Because when it comes to self caricature, no one does it better (or worse, depending on your view point) than the Italians. My first experience was in the trattorie (don't write in to this Italian speaker - one trattoria, two trattorie) up the Tottenham Court Road in the 1960s. Gingham table cloths and, of course, candles stuck into Chianti bottles (raffia covered, obviously). I don't remember much about the subtleties of the food, largely because (a) I was 11, and (b) my idea of food heaven was a plate of spaghetti approximately half of my body weight.

Early Scottish examples were Giorgio's (or was it just called George's?) in Edinburgh's Brougham Place. Then the suave - I probably should say suavissimi - Italians (there is no European nation which does cool better) moved upmarket. Here in Edinburgh, we had Cosmo's, Vito's, Raffaelli. Wonderful food - but was the heavily butter and cream sauced stuff not more representative of the hedonistic 1970s than of the flavours of the homeland?  And at the same time we had the rise of the Bar _____ (insert whichever Italian city you fancy). I have no idea which organisation was financing them, but the fact that the menus were all identical was deeply suspect. Number 56 was always described as Very special, please try it. And I won't mention the fact that my pepper mill is bigger than yours.

I guess that's why, until recently, I'd never been to La Piazza. Uptown and hungry one day, I wandered in with no, or low, expectations. And it was surprisingly good. News which I shared with many chums, all of whom had the same reaction. Conscious of the fact that I'd never written about it, I arranged lunch with the Great Whisky Magnate (not to be confused with the Retired Captain of Industry). 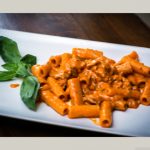 We come back to the question. Is a caricature a poor thing, or is it all that's best in dark and bright? GWM started with a classic Bufala Caprese. You can't get simpler, and it all depends on the quality of the ingredients. (Whisper it, but GWM isn't the ideal reviewer's luncheon companion on account of his reluctance to share.) He did, however, give it high marks, and he is a man of the world who knows his vittles. You can't help but love the way Italians name their pasta shapes. Farfalle - butterflies; fazzoletti- handkerchiefs. Or, and this a new one to me, vele, sailing boats. Serve any type of pasta with norcina sausage, porcini, truffles and cream, and it's hard to go wrong. (The image is a close relative of the dish I ate.)

Spaghetti Carbonara was, I believe, a wartime invention when US forces gave hungry Neapolitans surplus rations of bacon and eggs. If made badly, cream is involved, instead of allowing the combination of bacon fat and eggs to work their magic, as they do here. Risotto is a difficult enough thing to get right when you're cooking for two in the comfort of your own kitchen. How they do it in a restaurant I do not know. (Actually, that's a lie, as a chef pal once spilled the beans, but my lips are sealed.) And how many times has a seafood version emerged topped with little bits of pescatorian rubber? Well here you get a plate of food which is very good, without being historic.

Look at a good caricature, and it will make you smile. Eating here will do the same. 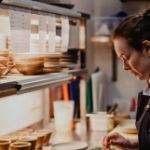 I read today that The Little Chartroom will be moving to larger premises in Bonnington Road, opening in September. In October the current premises in Albert Place will reopen as a wine bar and restaurant,  Eleanore. Chefs Hamish and Moray, who currently run The Little Chartroom pop-up on Portobello Promenade will head up the kitchen. Good luck, all.