Can you tell your tang from your bolster*? In the aftermath of the Tokyo Games, what is the major difference between Japan and Europe? Read on, and I'll explain. I am sometimes accused of being blunt - not today.

Having suspended publication (but not writing) for a month, I became complacent. Having a lot of articles in the can takes the edge off a little. Nothing like a Monday morning with nothing written and three columns to fill to sharpen the mind. 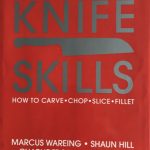 Glancing over my ever expanding row of food related books, a little red volume caught my eye and whetted my appetite. I commend to you Knife Skills: How To Carve, Chop, Slice, Fillet by four chefs, most notably Marcus Wareing. For some reason, unbeknown to me, I have never read it right the way through. I suspect it may be an unwillingness to recognise my own inadequacies.

When we amateurs contemplate the flashing blades of the top pros, I suspect we are struck primarily by their speed. If most of us tried to match that, in all likelihood serious injury would ensue. Why? Because, first and foremost, they have been taught correct technique. Get that right, then speed will follow. Cooking for four or six or eight, it really doesn't make much odds, like doing a two mile journey at 50 mph as opposed to 40. They, on the other hand, may be prepping for 200.

I have now done some cookery classes for a few pals. The very first thing I do is watch them chopping an onion. The spectacle is often terrifying, with wobbling attempts to attack a rolling round thing.** Many get away with it because their knives are blunt. The odd mishap may result in a bruise or a nick, not a visit to A & E. That would have been the case in my formative cooking years. My late Ma, terrific cook that she was, broke multitudinous rules, the first being that your knives should always be sharp. I grew up assuming that maximum force was required to split an onion, and that weight lifter strength was needed before you squared up to a carrot.

This was brought home to me in spectacular fashion in my second year at Uni. By then I was so confident in the one dish I could make, that I volunteered to cook for my pal Sandra and her flatmates, all students at Atholl Crescent, as it then was, catering college as we may now know it (I think). Their very first lesson involved converting knives which were merely very sharp when purchased into assassin's tools. Chopping with my usual ineptitude very quickly resulted in a deep and painful gash. Fortunately, as I was making a tomato based sauce, I think I got away with it. Two life lessons. Using a knife which isn't sharp enough is more likely to cause you injury: but with a very sharp one the injury will be more severe. As I still have ten fingers, I'm not doing too badly - though there are a good few scars. 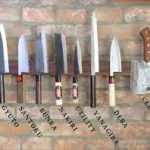 I can't remember where or how I first learned about the correct way to chop veg. I advise everyone to look at their technique, perhaps by taking a glance at this useful book.  Changing the way we have been doing things for years is never comfortable, but not only can it save you time, it can also improve the presentation of your dishes. I suspect most of us would marvel at how over 200 pages could be devoted to the subject, but in addition to veg there are sections on fish and shellfish, meat and poultry, doughs and desserts, and fruit. There is an interesting history section, and an introduction to more types of knives than you thought possible. Although Sheffield still has a reputation for cutlery, the principal manufacturers of kitchen knives in Europe are Germany and Switzerland. Many, however, can see no further than Japan as makers of some of the world's most lethal blades. Some Japanese manufacturers such as Global make a range in the western style, but a traditional Japanese knife is either right- or left-handed.

When you have been cooking for decades, it is sobering to realise how much there still is to learn.

*The tang is the strip of steel which attaches the blade to the handle. The bolster is the junction between the blade and the handle.

**If you want to see how it's done properly, follow this link to watch Gordon Ramsay chopping an onion.