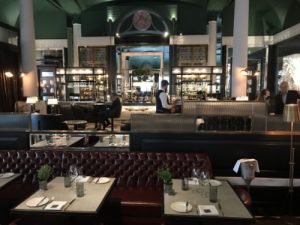 Proper lush! That seems to be a catchphrase of the likeable Tom Kerridge, whose name appears above the door here. Now the good Mr Kerridge made his name (and his 2 Michelin stars) at a pub, The Hand & Flowers in Marlow in Buckinghamshire. There is no danger of this place being mistaken for a pub. Proper plush, more like, as befits a hotel where room prices start at £599. If you want to bag The Actor's Penthouse, they will have a discreet chat with you about prices, though you can read the specification online. It features a bath with built in TV and separate rain shower. Crowded House take note. No need to take the weather with you when you come here. 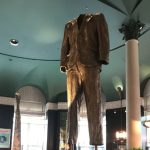 Don't Try To Leave Without Paying

You get the picture. The room itself is stunning. I believe Tom's wife Beth was involved in the design and was responsible for the sculpture, including the slightly alarming man with no body who hovered above our table. On a first visit to London for about two years, we were rendezvousing with the Sometime Brewing Giant. His perpetual good nature was even further enhanced by the fact that his team, Brentford, had just secured promotion to the Premier League, and that he had bought his season ticket when they were still in the Championship. All good omens.

For my own part I was somewhat discomfited when I was given the wine list. It's one of these massive tomes which I suppose you have to expect in a hotel like this, where some diners are prepared to fork out £95 for a caviar starter.

-   Can I help you at all? murmured the suave sommelier.

-   Yes, I replied, lend me a couple of hundred quid so I can afford to buy a drink.

Now at this stage, in a lesser place, the response might well have been a look of withering scorn. Instead, our hero laughed and pointed me in the direction of a Sicilian white for £30, and something red for not much more. Both very good, as it happened. It should be said that all the service we enjoyed was of a similar standard. A delightful smiley bunch of people.

I expect you want to know about the food. It's a fairly compact menu - 6 starters, 7 mains, 4 puds plus cheese. A Cornish crab Scotch egg with yellow pepper velouté was interesting, though the cooking process does detract from the flavour of the crab. More successful was the pork and mushroom terrine. It came with piccallili and even more bread - this time with truffle butter - on top of the wonderful selection we had been given at the start. The sea bass couldn't have been fresher if Tom had just popped out in his boat and caught it that morning. Pigs' cheek pie was a proper (lush) pie, not one of those imposters with a disc of pastry on top. Warm but still crisp, a triumph of the pie maker's art. I had never had clotted cream mash before. As artery-cloggingly lovely as the name suggests, with cubes of black pudding for extra cholesterol. The fish eaters had ordered a side of chips. Purely in the interests of research I pinched a couple. I have to tell you, dear reader, that these were the BEST CHIPS IN THE UNIVERSE.

At this stage, unfortunately, I have to insert a sour note. If the food was good - and yes, it was - so it bloody well should have been at these prices. Fish and chips will set you back £36.50, and at least your spuds are included. Want to go down the steak frites road? Well a fillet will cost you £49.50, with an extra £6.50 for a plate of these historic fries. At first I was prepared to blame rapacious London hoteliers and Whitehall overheads. Out of curiosity I glanced at The Hand & Flowers a la carte menu. Deep fried fish (turbot, admittedly) and chips are £61.00; sirloin and chips £87.00. There's a fine line between making a living and taking the piss. I leave it to you to make up your own mind.