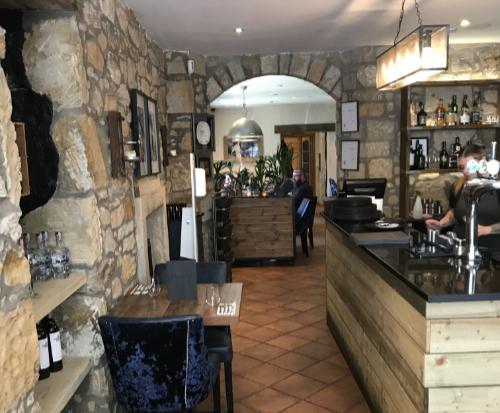 I'm not a snob. Ask anybody. Well, anybody who matters.

This quote, rightly or wrongly, is attributed to Simon Le Bon of Duran Duran fame. Its relevance is that my initial reaction to an invitation to eat in a Scottish provincial town is sometimes less joyous than it might be. That feeling is exacerbated by the fact that one of our two spy camps in Dunfermline has reported poorly on our intended destination. But the call to lunch has come from camp number two, to wit D & J, not to be confused with J & D. 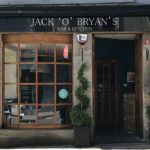 Anyway the sun is shining, and our companions know their vittles and have visited before. Not only is the sun shining but also, with the exception of Dunfermline town centre, all seems right with the world as we approach the oddly named Jack 'O' Bryans. Does it stay that way? Well, no - it just gets better. We are offered an outside table overlooking the handsome Louise Carnegie Gates which form the entrance to the city's famous Pittencrieff Park. Nice idea, but a little draughty. In a trice we are ensconced at a table in the bow window, and are being looked after by a trio of nice blonde ladies and a solitary man, Marian from Romania.

Searching for the root of the name, I scan the website. An Irish gentleman, perhaps, spelling his surname oddly, and not very good at punctuation? Nope. Father and son team Bryan and Jack. There isn't a lot of detail on the site, perhaps because it's marked © 2023. In the one photo it's Dad wearing the chef's whites, but it was Jack in the kitchen when we visited. He is also responsible for the impressive array of home made chocolates on display as you enter.

For such a small place (formerly a pub) the menu is huge. At lunchtime, you can choose from 18 starters and 14 mains. To be frank this worries me. It's fine in Indian restaurants where just a few base sauces can be adapted for many dishes, but will it work here?. Will there be issues about freshness of ingredients, or dishes prepared too far in advance? Here the selection of starters included plates as diverse as morcilla and apple, steak tartare, blue cheese panna cotta and charred BBQ squid. Oh, goodness me, guess what we ordered.

I'm told that chefs prefer Spanish black pudding to British as it contains less cereal. This was a fine version, tang and sharpness added by some much reduced caramelised onion and fresh apple slivers. The steak tartare was decent, and I was taken by surprise by the elegant delicacy of the savoury panna cotta, served with tiny cubes of purple and golden beetroot. The squid was the only off note, being a bit on the rubbery side and not adequately lifted by the advertised aioli and gazpacho.

Tricky to choose from 14 mains, but it made it easy to avoid doublers. At lunchtime you have a choice of a couple of sandwiches, but we were all up for a substantial main event. They advertise Iberian Black Pig as their house specialty, so that had to be added to the list. What's not to like about a classic Caesar salad topped with a few king prawns? Or a tempura monkfish, a real chunky brick, with a hot sweet and sour sauce? In the wrong hands a chicken fondue could have been an indifferent bit of fowl drowned in some cheese sauce. Here they bring a chunk of perfectly cooked moist chicken on a bed of good things including chorizo, leeks and potatoes in a delicious puddle of three cheeses, creamy and tangy.

The last word must go to the Spanish pig, served simply seared with some good sauté potatoes and a tomato and onion salsa. Probably the best bit of meat I've eaten this year. At dinner time, starters are much the same, but mains are beefed up, literally if you go for their signature picanha churrasco. I like the fact that this will be served only medium rare. Lest you accuse the chef of food fascism, the fillet steak can be cooked any way you like.

We finished up with some slivers of good cheese, and an elegant wooden box with 4 of Jack's choccies, which disappeared pretty fast. If you want to go really, really, really over the top on the pudding front, I dare you to sample the offering simply entitled Sticky Toffee. This comprises, wait for it, a sticky toffee choux bun with date and treacle cream and Scottish tablet AND clotted cream ice cream AND candied pecans AND toffee sauce. Lucky the calorie labelling rules don't apply to you, gentlemen.

I snatched a quick chat with the amiable Jack. No one could accuse him of anything other than producing good food in not the likeliest of locations. Where's Bryan? I asked. In a corner, I was told with a smile - but not why. The staff were a cheerful bunch. Unfortunately, apart from Yasmine, I didn't get the names of the girls. Oh, I nearly forgot. The bill includes a service charge. When they brought it, they not only drew it to our attention, but were at pains to point out that we didn't need to pay it if we didn't feel it was deserved. Wow! Never seen that before.

Full marks to the team. If every town in Scotland had a restaurant of this calibre the world would indeed be a better place.