It’s been difficult this week to fit in time for Tom Cooks! At the time of writing I’m in London – the hardships I have to endure to research restaurants for you all – and don’t have access to my vast library. Those of you who think I just recycle all my stuff from the internet, go to the bottom of the class. Well, two thirds of the way anyway.

For this week’s recipe, I’m recycling a golden oldie. Firstly, with the improved weather it makes a brilliant addition to a light lunch or buffet. Secondly, I note the prices in the shops are down by about 25%. And finally, I’ve been to the National Gallery and reminded myself of the great Vincent’s work. If you see the way he paints peppers, with great swirls depicting crazily misshapen fruit, you might conclude that the man was unhinged. (You might want to revise this – Ed.) The truth of the matter is that if you go to small village markets in Spain or Italy, you will see that van Gogh’s representations were true to life, a million miles from the sanitised, perfectly formed, Dutch versions which reach us in the UK.

I think this recipe was first popularised by Elizabeth David. Delia published a version in her Summer Cooking. This is my take, and it is a real family favourite. There are many people who will say that they don’t like anchovies. Unless they are vegan, or have an allergy, just don’t tell them. The tiny pieces cook away to nothing, and are effectively a salt substitute. You won’t know they’re there (although you would miss them if they weren’t).  Leaving the stalk on helps the peppers hold their shape when cooking and serving – make sure you don’t waste the juice. 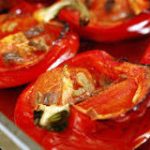 1 pepper per person (any colour apart from green), stalk on, split down the middle of the stalk, seeds and membrane removed); tomatoes, skinned, seeded and halved; garlic cloves, peeled and cut into thin slivers; salted anchovy fillets; olive oil (use your very best quality EVOO. I use Orodeal).

Preheat the oven to 180°C, Mark 4. Assemble the half peppers on a roasting tray. To each half pepper add half of a skinned and seeded tomato (you can use tinned if you can’t find good ripe ones), cut into four pieces, a sliver of garlic and an anchovy fillet cut into little pieces. Add a good tablespoonful of olive oil. Cook until the peppers are soft and just beginning to char at the edges. This takes anywhere between 45 minutes and an hour depending on the size of your peppers. When removing from the tray be careful not to lose the juices – they are sublime. Best served cold. Scatter with a little ripped basil, drizzle with a little extra oil if you like, and serve with some good bread to mop up the liquid.