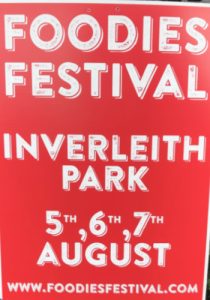 Well, it's the opening day of the Edinburgh Festival. Last night we've been at Murrayfield, entertained by the National Youth Choir of Scotland and a troupe of gravity defying Australians, appropriately titled Gravity & Other Myths. What to do before the opening event?

I'd passed Inverleith Park a day or two earlier, and had learned that to add to the city's great culturefest we also had three days of foodie fun. I don't particularly care for the word foody/foodie, but as their website is www.foodiesfestival.co.uk I'm just being polite by using their terminology.

The outlay for tickets is quite a chunky one, especially given the absence of big star names, but by the time we left it was quite forgotten. Our perambulation was on a vaguely logical basis, attempting to see all that was on offer. After a few forgettable stalls near the entrance we were assailed by the Gruyère man. An eminently forgettable cheese normally, but the sample of aged stuff he presented was very good indeed. Rich, nutty, almost Parmesan-like. 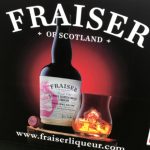 From the forgettable to the unthinkable. Fraiser of Scotland. They have created a drink combining whisky and strawberry. One's instinctive reaction is to recoil in horror - until you learn of the pedigree. It was created by one John Smith, sometime master blender at Glenmorangie. Neither of us is particularly a whisky fan, but a pedigree such as that deserves respect. The tasting on offer is a three stage one. With the first dive into it you do get a bit of the strawberry, albeit more akin to a child's cough syrup. Sniff again and you get almonds and marzipan. Add an ice cube and it changes again. Finally, with the addition of fresh lime juice and some ginger ale and you have a very pleasing cocktail. Interesting.

Getting further into the body of things a champagne bar hoves into view. This is much to L's chagrin as she's singing at the opening concert. I was forced to sample for both of us. Then synchronicity hits.

What were the recipes in the two most recent Tom Cooks! columns? Curry goat and rice and peas. And what were the lovely Jamaicans from Nottingham selling? You guessed it - jerk chicken. But also curry mutton served with rice and peas. Yes please. I did of course register serious disapproval at the absence of goat. We smiled at each other, knowing that the Aries journey is still a step too far for many British folk - witness the reaction to my post. Anyway it was darn fine. While I waited L went to the Bavarian beer stall. That woman is a treasure.

You never know quite what to expect at a food festival, certainly not a travelling massage tent. L toddled away to get loosened off. You're very stressed, the masseuse told her. My attention in the meantime had been distracted by the soft shell crab company. The produce, that is, not the very attractive ladies advertising the merchandise on their chests. We had a chat as I waited. The crabs are from Vietnam, apparently. Head cook Nick is from somewhere down south and fries on a peripatetic basis. Do want tortilla/salad/chilli sauce/crème fraîche? Yes to all of the above, For no obvious reason I was supplied with a fork. Useless. There is only one way to eat something in a tortilla - with your hands. And if it's dripping with sauce - with great care. Disposing of the packaging after I finished I noted with great satisfaction that my shirt remained pristine. Then and only than did I notice the state of my trouser leg and shoes. Returning to commend the troops on the quality I asked jokingly if they would pick up the cleaning bill. Don't worry, said Nick, it'll come off, it's not oil based. Sorry, he added, apologising for my messy eating habits. 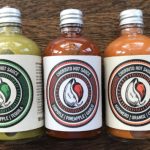 Then to hot sauce country. We chat to Dan from Chorrito Sauce Co, making a range of organic hot sauces in Stockbridge. A story to follow up there, I think. And Kit and Rosie, the lovely couple who make up Trodden Black from Dollar, also manufacturing a range of spicy and fermented things. Which of you is which, I ask? I discover they have recently married. Will this involve a name change? Well no, since it comes from the Robert Frost poem The Road Not Taken.

In leaves no step had trodden black/ Oh, I kept the first for another day!

Yet knowing how way leads on to way,/ I doubted if I should ever come back.

I must have been looking particularly glaikit as this was being explained to me. Maybe it was 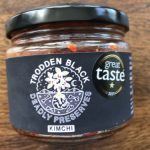 the hot sauce down the trousers. So when I was being told that Robert Frost was an American poet, the smartarse in me came out. Canadian, actually, I said. I've just checked. Born San Francisco, 1874. Oops, sorry.

This just left time for a chat with yer man from Vicenza who makes cannoli. The use of the Irish vernacular is a pathetic attempt to cover the fact that I didn't get his name, though I did speak a lot of Italian. I heartily recommend the lemon ones.

Excellent fun and lot of good food. The journey home involves much clinking, with jars of honey, hot sauce and kimchi. The only drawback was the realisation I was going  for dinner in three hours' time.