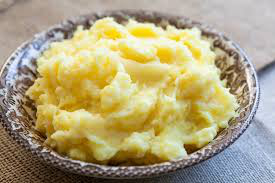 Now if you posed the question, mashed what, it proves how little you know me. In this divided age in which we live, a less magnanimous columnist might tell you to sling your hook: I, on the other hand, invite you to enter the fold and learn.

The answer is, of course, potato. Yesterday was the feast of Thanksgiving in the USA. Like all old established celebrations, it has its traditions. For example, a turkey is pardoned in the White House, but we've all heard enough about Donald Trump in the last few months, and why on earth would we want to pardon him? At a traditional Thanksgiving dinner turkey is eaten (actually around 46 million of them annually according to the US Poultry and Egg Association); and with the turkey there is invariably served, inter alia, mashed potato. 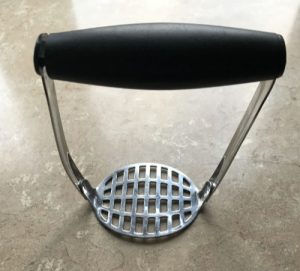 That gave me the inspiration for today's column. When you stop to think about it, the possibilities are almost endless. For me, mash is not a celebration dish, though it is one which is produced on a regular basis here in Johnston Towers. My method is less rudimentary than that which I grew up with, and that in turn would have been more sophisticated than the average Scottish methodology. Boil a pan of tatties till soft, drain, bash with a masher, add some salt and pepper and possibly a splash of milk. I'm fairly sure my mum would have added a knob of butter and possibly the top of the milk.*

At the other extreme, you have the so called fine dining method. As you know, I have nothing against haute cuisine, with the possible exception of how so called top chefs treat the idea of mashed potato. On programmes such as Masterchef you see poor saps knackering their wrists trying to push potato through a drum sieve. Then they add about 8 parts fat (butter, milk or cream) to 10 parts potato, to create something which will run off your plate. Not for me, thanks. So what is best? First there is a series of questions to answer.

How Do You Cook Your Potatoes?

Boiling is the traditional method. The problem is that to be able to be mashed properly they need to be pretty soft. If you over boil, there is the risk of a very soggy potato, which could translate into watery mash. I confess I still boil mine, but I do leave them to one side to dry out. Note, however, that they do need to be still hot when you start to work them. You could steam them, and in the smartest kitchens they will bake the potatoes and scoop out the innards. This will certainly give you the driest mash, but who could be bothered?

How Does Your Potato Turn To Mash? 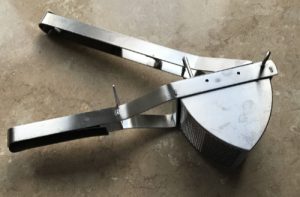 I mentioned a traditional masher. If I'm in a hurry and not being too fussy, I will use mine, but it is very difficult to remove all the lumps. Better by far to use a potato ricer. (I have no idea why it is so called.) It is a little fiddlier and is a bit of a sod to clean, but it will give much better results than a conventional masher. I have most of the kitchen equipment I could ever need, but I wish I had my mum's old Mouli, a hand cranked device for forcing veg (and other things) through sieves of various sizes. It was largely superseded by electric blenders, but if you take only one thing from today's lesson, let it be this. NEVER, EVER put potato in a Magimix or the like. It stretches the fibres, and you will end up with a pot of glue.

Well, this is the building block for perfect mash. Remember to taste as you go. If you are unfortunate enough to have an open plan kitchen, remember to use different spoons for tasting and stirring, because people may be watching. Mash will need more salt than you think. Pepper is mandatory for me, but to your taste. In my book, a large chunk of butter is as essential as the salt. Some authorities will specify unsalted. I have no idea why, as plenty of salt is involved. Put the butter in first. (You're tasting as you go, remember.)

What else? Some add milk - I wouldn't. Cream can make your mix over rich for me, especially if you've been generous with the butter. In its place, try crème fraîche or buttermilk. The light acidity makes a nice counterpoint to the unctuous butteriness. Olive oil mash became popular in the last 20 years. I don't care for it; however, if you want to try it, use your very best extra virgin stuff. (Orodeal, obviously.) For some piquancy, stir in a spoonful or two of grain mustard or, a huge favourite of ours, horseradish sauce, either creamed or hot according to your taste.

This is where the fun really begins. In one sense we have a reminder of the peasant origins of the potato, in this country and, especially, in Ireland. Forget your meat and potatoes - these ideas were ways of relieving the monotony of a staple, or possibly celebration dishes. In our more affluent times they are ways of using up leftovers.

Mash your potatoes together with any other veg you fancy. Carrot is an obvious one, or turnip (that's swede to some of you). If using the latter, a good grating of nutmeg works wonders. Or celeriac or whatever. Mastering the Art of French Cooking has a recipe which uses two heads - that's heads not cloves - of garlic in a dish for six! Alternatively, add black pudding or crispy bacon pieces - use your imagination.

Here are a few better known British examples, one each from England, Ireland and Scotland. You will note their similarity.

This is a cousin to the Irish colcannon.

In a frying pan, preferably non-stick, soften the onion gently in whatever fat you choose. I would use a mixture of a generous amount of butter and a little oil. Season lightly with s & p. Mix together the potatoes and cabbage/sprouts and season well. Put in the pan, pressing down the base and edges. Fry over a gentle to medium heat. Turn half way through, using a plate. You need the veg to be thoroughly heated through and a light brown crust to form. This will take about 10 minutes.

Jane Grigson recommends softening the spring onions in milk for about 20 minutes. I prefer them raw.

A (large) quantity of mashed potato; spring onions, chopped into pieces about 75 - 100mm (look nicer chopped on the diagonal) - allow 1 per serving; lots of butter (over and above any you have used for the mash).

Make the your mash in your preferred way. Serve a large dollop on a plate. Make a well in the centre and add a large piece of butter. Sprinkle with the spring onions and serve as the butter begins to melt.

Less well known. A Scottish variation much loved by my late Dad.

Preheat your oven to 180˚C/Mark 4. Mix the potato and turnip together in a large bowl and put to one side. Fry the cabbage or kale in two thirds of the butter until soft. Add the cabbage/kale and the remaining butter to the potato/turnip bowl and mix together, seasoning  well with plenty of salt and pepper. This will require more salt than you might think - potato can soak up a lot.

Transfer the mixture to an oven proof dish and sprinkle the cheese on top. Bake until heated through. This will need about 30 minutes. If the top is starting to turn too brown, cover with a lid or foil.

*It has just occurred to me that unless you are over 45 you probably have no idea what is meant by the top of the milk. When milk was sold in bottles, after a little while a small layer of creamy milk would form at the top of the bottle. Much prized and often fought over by siblings at breakfast cereal time.