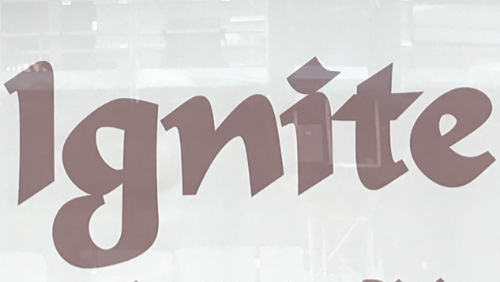 The generation of madness must have passed by now. I refer to the far off times when we knew no better, when the boasts in the pub were not of sporting or sexual triumphs, but of how hot an Indian meal you had consumed. In the eyes of young men, restaurants from the sub-continent were rated, not according to their authenticity or to the subtlety of their spicing, but according to the ferocity of their vindaloo.  Please tell me that's a thing of the past.

So it was a bit disconcerting to find an Indian restaurant called Ignite, a word which makes you think, light the blue touch paper and stand clear. When I say find, it's hardly a discovery given that the place has been here in the Haymarket area of Edinburgh for eighteen years. Why so long to get here? I had to scratch my head to answer that, and was astonished to find that out of the 150 or so reviews on the new website only 3 were of Indian places. (I use the geographical adjective loosely, and trust that friends and clients from Pakistan and Bangladesh will forgive me.)

The answer is that for almost the time I've lived in Murrayfield we have been blessed with a most splendid takeaway just down the road. Sadly that has slipped, and has had its three strikes. So when Scotland's Finest Former Journalist (West) came to stay and fancied a curry, a jaunt a little further afield was in order. I'd never been to Ignite, but have very dear friends from Fife who are happy to pop on a train of an evening to come here just for a quick ruby.

Suffice it to say that I'm very glad we came.

There's nothing much to indicate that you're entering anything other than a run of the mill place. There are two relatively unadorned rooms. They were going to put us in the fairly deserted one, but they were happy to accommodate our wish to be in the body of the kirk. Next to the bar, we got a chance to chat to the (motley) crew. There's owner Mohammed keeping an eye on his boys,  the young handsome Imran Khan and the more mature Mumtaz. With his elegant bow tie, twinkly eye and moustache, the latter, according to SFFJ(W), bore a remarkable resemblance to Mr Pastry. (Don't worry, it's before my time too. Click here for a taster.)

Reviewing many types of restaurants you can get a quick and often accurate first impression from the menu. That's not generally the case in an Indian one. Ignite's runs to many pages and does contain all the standards, though it does feature a couple of tasting menus, for carnivores and vegetarians respectively. Where you do get an accurate first impression is when the snacks start to arrive. Not all poppadoms (or papadams, as they are spelled on the menu) are the same, and the quality of chutneys and pickles can vary considerably. Full marks here.

For starters, without the translation I would have had no clue what Voll Puree was. A wonderful plate of stewed chickpeas. The puree is Ignite's spelling of those lovely little puffy discs of fried bread which I would have known as puri or poori. Well, we are talking about a country with 22 official languages, so a few variations on food naming hardly come as a surprise. The eye of SFFJ(W) was caught by baby aubergine pakura, the whole little veg being split, lightly battered and fried. The accompanying chilli and yoghurt sauces were a fair few notches above the norm.

SFFJ(W) has numerous fine features, one of which is the fact that he understands reviewing. How, from a menu such as this, can you try to get a representative sample? So after we'd decided on the Sag Gust, he suggested that we order something from the Standards pages to see how it compared. So we had a Chicken Pathia, described as you've seen it described a hundred times before. But a darn sight better than you've eaten it in most joints. Sweet, sour, hot. Yes, all of the above, but more finely balanced than Torville and Dean. That was merely very good indeed, but the Sag Gust, essentially lamb and spinach, was sensational. Fabulous, tasty lamb, the spinach based sauce as light as you could imagine. We certainly didn't need it but I ordered a side. If the Panchagri Dall, made with five types of lentil, didn't quite reach the heights of Dishoom's black dall (and few do), it was still pretty fine. Need I say that the naan and the pilao rice were excellent?

The bill minus drinks and service was under sixty quid, and we had a lot of food to bring home. The ladies who had been on singing duty were pleased to see us but not as pleased as they were to get their chops round our Sag Gust. A little Chicken Pathia survived to the following day and passed the cold curry for breakfast test with flying colours.

In my time I've eaten a lot of  food in Indian restaurants. A lot of it has been very good indeed, but it's relatively rare to have dishes with a real wow factor. Ignite succeeded. It's no surprise to learn that they are recent winners of the Best Indian Restaurant in Edinburgh award. I'm currently rereading the menu planning my next trip, and ruing eighteen lost years.