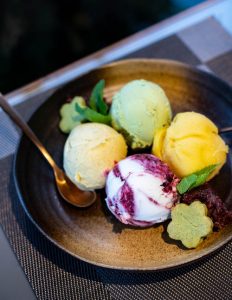 Well, no prizes for guessing what the I was for. I did think about focussing on ice alone, but doubted you would let me away with it. Ice is defined as a food in the UK food legislation, and should be handled as such. The few times I've had a dodgy tummy out east can probably be traced back to ice (or salad).

But imagine a world without it. Would anyone want to drink a G & T or cocktail that wasn't chilled? A hot summer with no ice cream? Ice is a product which we take so much for granted that the delving into the history of ice cream unearths so much that is truly remarkable. As with many foods which have been with us for ever, its origins are unclear. Some say Persia from about 550 BC. Others say that it began in China, then to Arab nations, then to Europe. You pays your penny...

I remember tales of Arab princes entertaining guests in their tents in the middle of the desert and serving refreshing sherbet. I had no idea that this was the precursor to sorbet, early versions being syrup flavoured with snow. Leaving aside my dreadful knowledge of geography, the logistics of transporting the ice remain mind blowing. It is known, for example, that the Mughal emperors used relays of horsemen to bring ice from the Hindu Kush (in modern Afghanistan) to Delhi. No I don't know how they did it either. 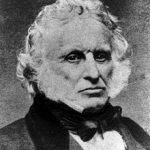 A few bits of mini science to bear in mind. A large block of ice will take a long time to melt, even in high-ish temperatures. That's why you should choose large ice cubes for your drink. In the 19th century a Boston man named Frederic Tudor set up a business  cutting huge blocks of ice from frozen lakes in New England and shipping them world wide, including to the Caribbean and India*. Calcutta became his most profitable destination. A ship which departed with 180 tons of ice still had 100 tons when it arrived. It travelled insulated with sawdust, and was stored in specially built ice houses. These latter became popular in grand houses in this country. Go for a walk in a shady part of the grounds of our stately homes and you can still find many today. 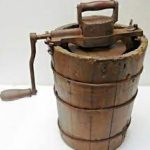 The second scientific advance was salt. It was thought that cream wouldn't freeze. Some bright spark discovered that adding salt to ice brings the temperature to below the freezing point of pure water. Put your mixture in a bowl inside a churn full of ice, water and salt, crank for hours till you are suffering from serious RSI and voilà. (I have tried to use one of these things, and they're bloody hard work.)

As you might expect, the Italians have been influential in the spread of popularity. Catherine Medici introduced gelato to the French court when she married Henri II. A century later one of her countrymen, Francesco Procopio, set up a chain of 250 cafes, or limonadiers, as they were named, in and around Paris. 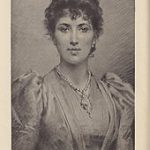 In Britain, recipes for ice creams appear as early as 1718. In the next century one Alice Marshall became known as the queen of ices, producing four books on the subject. She is credited with inventing the ice cream cone, which in turn was popularised in the USA at the World's Fair in St Louis in 1904. By the 20th century, of course, things were taking off. Industrial refrigeration and mechanisation made life so much simpler. In Scotland, however, business continued for a long time on a smaller scale, with higher quality. How many of us didn't have our favourite local Italian cafe which made its own? In small town Fife where I grew up, I can remember six within a couple of miles and there were probably more. But in the early days, there was one flavour - vanilla. This was in stark contrast to the multitudinous flavours available from a gelato cart in Italy, and may have led to the downfall of the cottage industry.

As a child I remember the thrill of a block of Neapolitan (three layers with strawberry at one end and chocolate at the other) or Raspberry Ripple, vanilla ice cream swirled with some purply red stuff which may or may not have once had a connection with a real fruit. We didn't have food labelling in these days. But even as a child, I shied away from the soft ice cream poured out of a nozzle from a van headed Mr Whippy. (I don't think you'd get away with that name today in this less innocent age.) The soft texture is attained by whipping more air in, thus bulking it out and increasing profit margins. Truly horrible stuff.

So where are we today? It's up to you to decide, I guess. An awful lot of ice cream is produced by Big Food plc. Walls is produced under 26 names half way across the world, plus Cornetto and Magnum. Don't be fooled by the indy hard core names of the Ben & Jerry's brands - sold to Unilever a long time ago. (Oh, those folk who also own Walls.) I suppose I should also mention Nestlé. Between the two, they control one third of a global market worth $60 billion (yes you read that correctly, 60 billion dollars.) We've come a long way from Demarco's in Cowdenbeath.

A delight to meet today for the first time, subscriber PM. Great craic about food, in particular her first meal in Bologna. In the meat capital of Italy, home to prosciutto crudo and ragu, she managed to choose a vegan restaurant which didn't sell wine. That's talent.