I wish back for just one normal evening. I was loved and I was never hungry, and for a small girl from Currock, that was as good as things get. 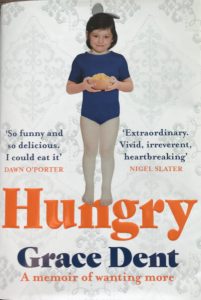 We all know now that the small girl from Currock went on to do many more things. But until I read this, her autobiography, all I knew about Grace Dent was that she comes from somewhere in the north of England, is The Guardian food critic who is a regular on Masterchef: The Professionals, and has a snappy turn of phrase. Early on in this entertaining memoir, it did occur to me that hers was not the normal background for someone to become food critic for a national daily newspaper.

Now if you tell me that this is a snobby attitude and that life is egalitarian these days, allow me to present a few facts about the better known in the foodie journalist family. Jay Rayner's mother was taking him to top London nosheries from his early teens. Matthew Fort - Old Etonian. Giles Coren - Westminster School and Oxford, and son of the funniest British columnist of the second half of the twentieth century. What about my favourite of all time, Jonathan Meades? Salisbury School and the University of Bordeaux, summers being spent dining in the south of France accompanying his father on sales trips. And one final example, Tom Parker Bowles? Well his step dad is Heir to the Throne. All some way removed from a rebellious lass from Currock, near Carlisle.

It's a tribute to her feistiness and perseverance that Dent got there, allied, one suspects, to a fair bit of native cunning. Her mother had a strong sense of one's place in the order of things. In her street, the Dents were at the upper end, due in no small measure to mum's fetish for home improvement. (Their house had a vestibule, for goodness sake.) The Phillips were looked up to - they had a breakfast bar, a utility room and a soda stream: on the other hand the next door neighbours  were deemed to be "resolutely common."

But we move swiftly on, through a turbulent adolescence, and regular encounters with the truancy officer, to scraping enough A level grades to gain entrance to Stirling University. Where's that? asks a stuck up interviewer in London. Scotland. Oh.

What's your question? Ah, you want to know more about the food. Me too. In her foreword Grace writes, The past is a foreign country; they eat chips differently there. Early food memories which she describes were equally a million miles away from Mayfair or Soho. Preparing  sketty with her dad involved a bolognese sauce made with condensed tomato soup, and pasta boiled for 30 to 40 minutes. Stirling was in a different food country too. Despite having been brought up five miles from the border, our heroine made early food discoveries. Buckfast tonic wine; ice cold Irn Bru for the following morning; Tunnock's Caramel Wafers, and deep fried everything. 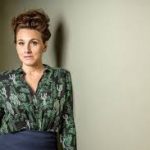 As she is today

The hungry of the title refers not, as I had first thought, to childhood privations, but to her feeling that there was more out there, and also to the pangs when fighting her lifelong war against weight gain, a tricky thing for a restaurant critic. Food appears in many forms, but childhood nosh reached fresh heights of luxury following the opening of the new 34,000 square feet ASDA. 48 potato waffles for 99p; stuff you didn't know you needed such as gift boxes of Ferrero Rocher, or Thomas the Tank Engine cakes reduced in price at closing time. But there was proper home cooking too. Sirloin steak might be on the menu, but it was always served well done. Only "that French lot" ate it with blood. There might be onions with it. The fine art of onion softening is almost unteachable. It is a deeply mindful act that needs to be carried out absent-mindedly. There are strange home visits after she is established as a food writer. Her parents are astonished that a side dish can cost £4, when they can have a full meal at the Toby Carvery for that amount.

Parents (assuming one had any) feature in any autobiography, obviously, but this is rather different. Nearly quarter of a century ago, the family, Grace in particular, became concerned about her father's health. Diabetes was involved, but probably there was a mental issue (though his deep secret past didn't help). Eventually Grace mentioned the unmentionable, telling her mother that she thought her dad might have dementia. Oh, Grace, he's not got dementia, she sighed. He's just a dickhead.

There is so much sharp writing here. When reading a book to review I scribble some notes as I go. 100 pages in, I needed to fetch more paper. Dad was a Liverpudlian and Grace would occasionally hear traces of Scouse in her own accent. Liverpool genes are like a rogue pair of red knickers in the washing machine with your whites. They leave a trace. But, as happens when most children leave home, especially when making their name in the big city 250 miles distant, contact lessens until things go wrong.

It turns out that Dad did have dementia, and Mum developed a long slow cancer. Being a London based food critic (she was with the Evening Standard then) and acquiring a house in the Lakes so the family could be together, must have been an enormous logistical and emotional challenge. Dealing with a domestic emergency in the early hours before boarding the eight o'clock train to appear on Masterchef, for example. And in the midst of all this, being offered the gig as Guardian food critic, a veritable offer you can't refuse. Grace Dent, you are some woman.

And some writer. When the book went to press both parents were still alive. Dad is in a care home. Mum is self-isolating in a small flat, having found comfort during lockdown in the QVC shopping channel, Angel Delight and long daily phone calls with her children. She thinks that Hungry is more evidence of her daughter's over-active imagination.

Whether fact, fiction or probably a combination, this is as fine an autobiography as you could wish for. Funny, sharp, touching and beautifully written, this would make a fabulous Christmas present for anyone. (And Grace, if you're reading this, any time you need a dining partner...)

A memoir of wanting more