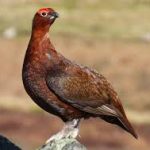 I've been cooking a fair bit of game lately, and regular readers will know that my favourite food suppliers of the moment are Castle Game Scotland in West Lothian. For feathered game, this is the time of year. The pheasant season starts on 1 October, and we have been able to enjoy grouse since the 12 August. I hadn't eaten grouse until a few years ago, and I regularly kick myself for the lost time. It has a more gamey flavour than, say, pheasant but not excessively so. Escoffier described it a the Englishman's favourite game bird. He glosses over the fact that it was common place in his time to hang them until the flesh was almost rotting. Disgusting.

Beyond that, in Ma Cuisine, he doesn't say much more other than that grouse is generally roasted in the oven or on a spit. Not terribly helpful, Auguste. And therein, I believe, lies the root of the problem. You don't want to buy a luxury ingredient unless you're confident that you can cook it properly. Let's assume that it's a young bird and you want to roast it. Most of the cook books which I consulted suggested roasting times between 25 and 35 minutes. Well, no wonder people aren't happy with the end produce. You need something that's pink but not bleeding, that's moist and full of flavour. I dread to consider the state of a 35 minute grouse.

I mentioned luxury. At the weekend I paid £8.50 per bird. Now that's not a cheap ingredient, but one grouse will feed a very hungry person. The price will come down as the season goes on. If you choose grouse at a high end restaurant, in all probability you will be served a half. So compare your unit cost with any type of steak, and it's not looking so bad. And how long to cook it for? Well, help is at hand. Read on.

For this I have to thank Phil Vickery and Simon Boddy, authors of Game, published by Kyle Books in 2014. Their method is a fairly simple technique. You will note that the cooking time is a fraction of that recommended in older books: but the resting time is of vital importance too. You can serve grouse with all sorts of stuff. Cooked well, it shouldn't need any gravy, but I've also given a recipe for a sauce you can cook using Madeira or port. Your butcher or game dealer should be able to let you have some carcasses. You will need a frying pan which can go in the oven, which failing a preheated roasting tray to which you can transfer the birds after the initial browning on the stove. I'm assuming you're being generous, allowing 1 bird per person. 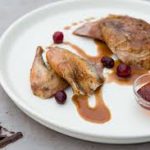 Preheat the oven to 220˚C/Mark 7. Take the birds out of the fridge at least an hour before cooking. Season well with salt and pepper. Remember to season the cavity as well, and pop in a small nut of butter. Melt the remaining butter with the oil over quite a high heat until it foams and starts to turn brown. Put the birds in the pan, side down and brown for 1 minute on each side. Put the pan in the oven and roast for a further 5 minutes. Then turn the birds on to the other side, baste well with the juices and roast for a further 5. Then turn the birds breast side up, baste again and roast for a final 5 minutes. That's 17 minutes in total. Warm a plate to transfer the birds to, and have tin foil to hand.

Put the birds breast side down on the warm plate and cover tightly with foil. Leave to rest for a further 15 minutes.

To serve, remove the legs, and slice the breast meat, skin on, away from the breast bone. Reserve the carcasses for sauce - see below. Unlike many game birds, grouse legs make delicious eating. With some birds, the legs are too small to bother with. With others, such as pheasant, the sharp tendons make for an unpleasant experience. If you are serving to first time game eaters, remind them that there may be the occasional lead shot.

I have a significant dislike of (a) runny sauces, and (b) most sauces thickened with flour. This requires a lot of reduction to produce just a drizzle of sauce, but I think it's worth it.

For the game stock

300ml Madeira or port; salt and pepper; a knob or two of butter.

To make the stock, roughly chop each carcasse into two or three pieces. In a saucepan, sauté the veg over a medium heat for 3 or 4 minutes. Add the carcasses and cook for a further couple of minutes, Add enough water (about 250 - 300ml) to cover the veg. Bring to the boil, reduce the heat, cover and simmer for 60 - 90 minutes. Then sieve off the liquid and discard the veg and carcasses.

When you are ready to make your sauce, pour the Madeira or port into a fresh pan. Reduce over a high heat to about one third of the original volume. Add the game stock and continue to reduce. When you are down to about 100 ml of liquid, season to taste with salt and pepper, and continue to cook till you reach the desired consistency. Just before serving, whisk in a few dots of butter to give the sauce an nice shine.