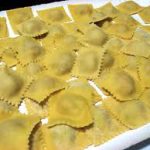 So, how did your first effort go? Well enough, obviously, since you're back for more. The only reason I got a pasta maker in the first place was to make ravioli. For a long long time I believed deep down that when it came to spaghetti or tagliatelle I preferred the dried stuff. I'm in the process of changing my mind.

Now in theory ravioli should be simple enough, Cut a piece of pasta, stuff it, cook it. Ah, the confidence, nay the naivety, of youth. (Well, in my case, late middle age.). There are a fair few holes in the road, and I've fallen into most of them. Anyway, get your sheet of pasta made (see last week's column for instructions). For ravioli, you want the pasta as thin as you can get it. Work quickly before it dries out. Doing it in batches, I would advise rolling one part of the dough and making your ravioli before moving on to the second batch. You need enough flour to prevent sticking, but not so much as to dry out the dough before the ravioli is made. (You can use plenty thereafter, but that's another story.)

Now, decisions, decisions. What size would you like? You can get square ravioli cutters which are so tiny you could barely fit a pea in to them. Avoid. In modern restaurants it is common to find ravioli on the menu but the produced plate contains but one single specimen. I quite like this, as it gives you plenty of room for a generous filling; however, if this has been advertised as ravioli, call trading standards at once. The singular is raviolo. There are cutters of all sizes, but you don't need them. Find a saucer or coaster of the right size and cut round it. For the big ones, use two circles of pasta one on top of the other, (with the filling in between, obviously). About 8cm in diameter is a good size, but suit yourself. This can be a bit wasteful, but gather up the scraps of dough and put them through the machine again, if 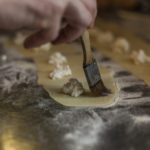 they're not too dry.

A fairly easy way is the folding method. The width of your pasta maker is probably 14cm. Square off your sheet of dough to a perfect rectangle. Put spoonfuls of your filling on the lower half of the strip, spaced evenly. There is a temptation to try to overfill. One teaspoonful of filling is enough for this size. Any more and the ravioli may burst in the cooking. With a pastry brush and water, moisten all the edges of the dough, and the spaces between the filling. Fold the upper edge of the pasta over, and press down to seal. Cut into individual squares, then press down around the filling. Start at the folded edge in work towards the fold. What you are looking to do is not only to seal the ravioli, but to get rid of any air pockets. If you don't, they will probably burst when you cook them.

With what shall I stuff them dear Liza, dear Liza? Well, dear Henry, the choice is yours, but there are a few pointers. Runny fillings are not recommended. But I'm getting ahead of myself. (And getting even further ahead, one day I plan to try to replicate the most stunning ravioli ever, eaten at The Lookout by Gardeners Cottage, which features a whole egg yolk which bursts spectacularly when you cut into it. But not today.) As with any pasta dish, remember that the filling has to work hard to flavour a lot of bland dough. Make sure they are very well seasoned. And finally, remember that ravioli can be quite dry. They really need a complementary sauce. You thought your tagliatelle were fiddly? Never mind, your diners will appreciate the effort. And if they don't just don't invite them again.

Start with a few classics.

Cook and shred some spinach. Season it well with salt, pepper and nutmeg. Allow to cool slightly, then squeeze out as much liquid as you can. You will need to squeeze several times. When the spinach is cold, mix with equal amounts of ricotta cheese, some grated Parmesan and lemon zest. Serve with melted butter which has been infused with a few chopped sage leaves. Sieve the sauce to remove any impurities from the melted butter

Mix white crab meat with mascarpone cheese, lemon zest, and curry powder, or chilli powder or finely chopped red chilli. Serve with a seafood bisque. Spectacular if you can be bothered.

This is a Roman specialty. Take some left over oxtail stew and blitz the meat. Serve with any gravy left from the stew, thinned down if necessary.

This was my own invention. I had made an excess of braised lamb shanks. Two full meals and still lots left. I blitzed it to make the stuffing and served with a red wine and rosemary reduction. 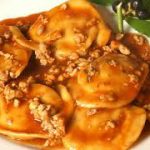 Cook pork mince with lots of garlic and season with fresh herbs of your choice. Drain off any liquid before filling the ravioli. Serve with tomato sauce.

I have had a few traumatic times in a kitchen. but the one which has scarred my psyche for life was my first attempt at oxtail ravioli. Oxtail stew: 5 - 6 hours in the making. Pasta making, rolling, stuffing: another hour or two. I duly popped my beautiful creations on a plate. When I returned to cook them, they had all stuck together. Moral - dredge with LOTS of flour. 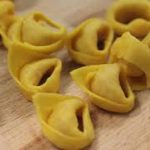 These are three versions of the same beast, just different sizes. Cut a circle of pasta and stuff. Fold over and seal, to make a half moon shape. Wet the edges at either side of the straight edge, fold round and stick together. The uncouth say they resemble a belly button.

Bring well salted water to a boil in a large wide pan. Unlike tagliatelle you don't want a rolling boil - that's more likely to burst any ravioli which have been made less than perfectly. Cook in batches. They will need about three minutes, which is why your fillings must be already cooked. Remove with a slotted spoon and drain. Serve immediately with your sauce of choice. Feel free to top with cheese, herbs or whatever, as with any other pasta.

Difficult to assess. Obviously it depends on size. At the beginning you will be a bit more wasteful. As a rule of thumb you should get 20 - 25 small ravioli from a batch made with 1 egg and 100g of flour.

Get the hang of  the basics, repeat a few times to build your confidence. Make the mistakes (as you will) when you have only family to hand. Pretty soon you'll be able to produce food which is out of the ordinary, liven up your dinners and delight your diners. It's worth the effort