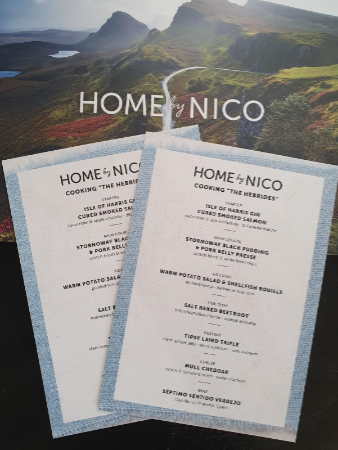 Some of you may well be familiar with Six by Nico, although none of the energetic Mr Simeone's restaurants has as yet been reviewed in Tom Eats! Starting in Glasgow he now has a total of six restaurants, as far apart as Edinburgh, Belfast. Liverpool, Manchester and London, plus the original. A fitting number, as the concept in all is the same. There is a six course tasting menu which changes to a new theme every six weeks. His home delivery service is available UK wide. Nobly, Miranda Heggie agreed to sample it for us 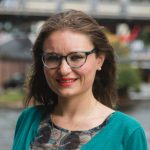 When was a child, my mum would take me to a different Hebridean island each year in my school summer holidays. I have fond memories of swimming in the sea off the Isle of Eigg, crossing the beach from Colonsay to Oronsay when the tide was out, being fascinated by whisky distillery tours despite being too young to drink the stuff, and taking a ride on the (sadly now closed) miniature steam railway on the Isle of Mull. It’s a part of the world I long to go back to, but for now, locked-down in the landlocked city of Birmingham, the Hebrides shall have to come to me. And indeed they did, last Friday evening, when my partner and I enjoyed the latest offering from Home by Nico: “Cooking the Hebrides”. Six by Nico - the popular eatery with a themed six course menu which changes every six weeks - has teamed up with food delivery company HOME-X to offer UK wide delivery for their culinary creations. Six by Nico’s marketing game has always been strong, so, as is to be expected, it’s a pretty slick operation with branded packaging, a very nicely produced recipe booklet and two individual menu cards.

The starter of Isle of Harris gin cured smoked salmon was nice and easy to assemble; take the salmon out its packets and place on a plate, adorn with the accompanying dill crème fraîche and cucumber chutney and you are good to go. I must admit I didn’t taste too much of the Isle of Harris gin coming through (although that may be down to the increasing strength of my G&Ts as lockdown goes on…). It was still delicious though, the accoutrements providing a fresh bite to the salmon’s smokiness. 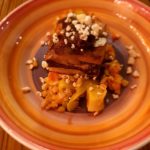 The main - Stornoway black pudding and pork belly pressé with a scotch broth ragu - did require a little bit of cooking, though not much. The six-step instructions at first glance appeared dauntingly complex, but when I actually read them all they really said was “brown on both sides and warm through in the oven; heat the sauce in a pan”. After completing this onerous task, I spooned the ragu into two plates, popped on the little cubes of meat and topped them with prune relish and a sprinkle of crackling. There was a lot of meat packed into these pressés - so much so I couldn’t actually finish mine despite the gorgeous flavour. The prune compote gave lovely notes of sweetness, and the carrots and barley in the scotch broth ragu offset some of the richness. The two sides - salt baked beetroot and warm potato salad with a shellfish rouille - just needed warmed up and their sauces stirred through. I must admit I’d thought the shellfish rouille would be a bit weird with all the other flavours going on, but I was wrong; everything was beautifully balanced, the walnuts in the beetroot dish adding a nice bit of crunch.

Now I know there can be a bit of debate surrounding what should come next: cheese or dessert. While I do admire our French neighbours and generally think them more sophisticated than us in most things, I believe, in this case, they’ve got it wrong. (Given the Hebridean theme I’m sure there’s a joke in here about Gallic vs Gaelic but I can’t find it. Please leave it in the comments if you can think of one.) Cheese, in my opinion, is the best bit of any meal, and for that reason should be left until last and enjoyed at leisure. I have no strong opinions about what should be drunk with it, as long as food, drink and conversation are all heartily enjoyed. Anyway, I digress. At this point we moved to dessert; the 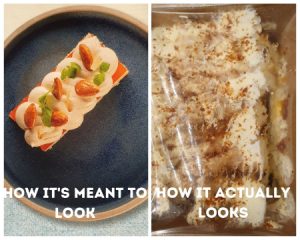 “Tipsy Laird Trifle”. Well, it looks like this particular tipsy laird may have fallen on hard times due to Covid and been forced to take a job with DPD, as his trifle had clearly been bashed about a few times about in transit. I suppose sending anything with piped fresh cream through the post poses a risk to its aesthetic integrity.

But, proof of the pudding and all that, it was very nice as trifles go. The addition of sea buckthorn instead of the traditional raspberries gave it a mellow sweetness and the crumbled almonds on top provided a good nutty bite. I must say, trifle has never been my favourite. There’s something about the granular texture of sponge meeting cream that I’ve always found a bit yucky, so I didn’t eat a great deal of this. Not least, in part, to save room for… cheese!!

I couldn’t not supplement Home by Nico’s generous portion of Isle of Mull cheddar with some other artisan cheeses. Ideally they’d all come from the Hebrides, but I think finding a full Hebridean cheeseboard would be tricky even in Scotland. I took a trip to Anderson and Hill and  channeled the Celtic spirit, purchasing some Cashel Blue (known as the Irish Stilton even though it’s far softer and less crumbly). I also bought a couple of English cheeses: Berkswell - a ewes’ milk cheese made just outside Coventry - and a super creamy brie-style cheese from Kent whose name I forget. All went perfectly with the puffy Hebridean water crackers and onion and tamarind chutney, as well as complementing the Isle of Mull.

Each Home by Nico box comes with a bottle of wine too, in our case, a bottle of Spanish Verdejo. Its keen grassiness was a perfect match with the salmon, though it would not have  worked with the pork and black pudding. (If you’re at all interested, we paired the main with a Barbera d’Asti from Connolly’s, the cheese with an LBV port from Loki and the dessert with Edinburgh Gin’s Orange Blossom and Mandarin liqueur from my Granny at Christmas-time.)

For £60, including delivery it’s superb value (and, dare I say it, far better value than the actual restaurant). The quality of the ingredients and cooking is high and the dishes are easy to put together without compromising their sophistication. This was definitely a lockdown dining highlight, and - while I’m excited for restaurants to reopen - I hope to try another Home by Nico box while I still have the chance!

Once again, very many thanks to Miranda. Where would Tom Eats! be without you?