I’m grateful to Michael Greenlaw for alerting me to this rather nice confection and providing a couple of recipes. Michael is also this week’s guest reviewer in the Tom Cooks! column, so more about him there. As many traditions lose sight of their roots, it is interesting to do some research into their background. In the case of Hallowe’en, it can be downright bewildering. The name itself, which means the night before (evening, shortened to e’en in Scotland) All Hallows’ (Saints) Day, is undoubtedly Christian, but the festival itself is likely to be of Celtic origin. It is suggested by some historians that the date marked the end of the harvest season and the beginning of winter. It is known that there was a Gaelic festival Samhain, and it is likely that the Christian church conveniently annexed it, much as it did with December 25th. November 2nd is the Day of the Dead, but those who write about the famous Mexican fiesta are at pains to stress how different it is from Hallowe’en. Anyway, that’s enough myth and legend.

The celebration of Hallowe’en, once popular throughout Europe, died away, Scotland being one of the main exceptions. It is likely that its traditions were taken across the Irish Sea by the Scots, and it’s hard to think of a nation that’s fonder of a bit of tradition than the Irish. This recipe is a leavened fruit loaf, a cross between a traditional sultana loaf and proper bread. The addition of the various symbolic charms added to the fun. On 31 October the whole family would gather for a cup of tea and a slice of cake, to find out what the future held. My sister tells me that once upon a time we had a similar ritual with a variety of charms in our Christmas pudding. I remember only the sixpence or the silver threepenny: then again, she is VERY much older than I.

A ring – wed within the year

A coin – good fortune or riches

A stick – an unhappy marriage or continual disputes

A pea – you won’t marry that year

A thimble – you won’t marry

A medallion of the Virgin Mary – the priesthood or the nunnery beckons. (Used less often these days) 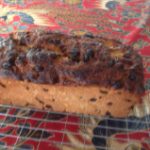 It seems that the name originated in two parts. Someone (not Michael, I hasten to add) tried to spin me the line that the name was half English and half Irish, barm coming from an old English word beorma, meaning yeasty fermented liquor, and brac,¸the Irish word for speckled. Pull the other one. Discover that the Irish word for loaf is bairin, and draw your own conclusions.

Warm the milk, and melt the butter in it. Mix the yeast with 1 tbsp of the sugar. Add half of the warmed milk mixture then stir in the beaten egg. Sift the cinnamon, nutmeg and flour into a bowl and mix together. Make a well in the centre and pour in half of the yeast and liquid mixture. Sprinkle a little flour over the liquid and leave it in a warm place for 20 minutes until the yeast froths up. Add the remainder of the liquid a bit at a time and mix into a dough. It will be fairly sticky. Turn it out onto a floured board, sprinkle with the sugar, raisins, currants and chopped peel and knead them into the dough. Put the dough into a butter-greased large bowl, cover with clingfilm and leave in a warm place until doubled in size.

Knock it back again, knead for a few minutes incorporating the charms and then shape into your greased bread tin. Brush the top with melted butter and cover until doubled in size again.

Bake in the middle of the oven for about 40 minutes at 200°C /Mark 6 until a skewer inserted into the centre comes out clean. (If your oven is a very hot one, as mine is, you may want the temperature down a notch, and the cooking time up a little.)

To glaze, brush with the sugar syrup when it comes out of the oven and is still hot. As with any loaf, resist the temptation to eat while still warm – remember the cooling time is part of the cooking process.

Assemble your entire family and find out what the year ahead holds.