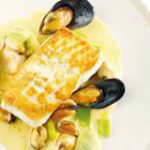 I didn't follow a recipe for this anniversary routine masterpiece, but it worked quite well. You  make it slightly backside foremost, as you have to cook the mussels first. The sauce for the fish is wine based (or in this case vermouth). Traditionally you would thicken this with a splash of cream, which I don't use as L is allergic.

Doing a red wine sauce with beef or chicken stock, you can get a decent thickness just by reducing it fiercely; however, I had a feeling this would be less effective here. I started with a roux and made a thin velouté using the strained cooking juices from the mussels, building up the sauce from there with a little more vermouth. I cooked the fish and leeks in separate pans then combined everything together at the last minute for just long enough to make sure the mussels were warmed through. I'm sure a pro would have a less convoluted way of doing, but I wanted to make sure nothing was overcooked. Mussels are usually sold in nets. If you have more than you need, cook them all. With any surplus, remove from their shells and you can freeze them.

A final word of caution about the seasoning. Mussels will bring their own salt to the party. While I would season the fish before cooking it, I'd omit any other salt until tasting the finished sauce.

2 halibut fillets (150 - 200g); about 16 - 20 mussels (more or less, according to choice); 1 small leek, split down the middle and cut into fine half moons; 1 shallot finely chopped; 1 clove garlic, crushed;  dry vermouth (I generally use Noilly Prat); butter and flour for the roux (about 25g of each will suffice); butter for softening the shallot; butter and oil for cooking the leek and the fish; salt and pepper; squeeze of lemon; herbs for garnish (optional).

First prepare the mussels. Rinse them well in a colander and remove the beards - the annoying wee fronds. Discard any which don't close when you tap them. In a pan which has a tight fitting lid, soften the shallot and garlic in butter. Add the mussels, a good glug of vermouth (about 75ml, but I didn't measure it) and an equal amount of water. Turn the heat up to maximum and steam until the mussels start to open. The will get a little more cooking later, so remove them from the pan at once. DO NOT get rid of the cooking liquid, but strain it into jug for later. (I do mean strain - there may have been some grit from the mussels.) Remove the mussels from their shells and set to one side.

Start softening the leek gently in butter and oil in a separate pan. While it is cooking, make a roux in the usual way. When the roux is well cooked, use the cooking liquor to make a thinnish sauce.

To cook the fish, season with s & p on both sides. Melt a large piece of butter in a pan with some oil. You want enough heat to get a little colour on your fish on each side, but not so much heat that your burn the butter. An average size fillet will take a couple of minutes on each side, but use your judgement. If the butter is starting to brown too much, a squeeze of lemon will stabilise it. When the fish is almost but not quite cooked, put it to one side to rest and keep warm. Splash another measure of vermouth into the pan and allow it evaporate almost completely. Add the leeks to the fish pan plus however much of the velouté you want, plus the mussels. Check the seasoning. Make sure everything is heated through, add any garnish you want, then plate everything up with a grind of pepper and another squeeze of lemon.