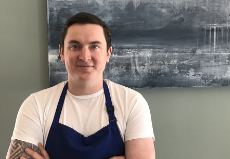 There is something about this part of Fife and Masterchef:The Professionals. Welshman Scott Davies was cheffing at the nearby The Adamson, when he became a finalist in 2013. He is now head chef at Shirley Spears' Three Chimneys on Skye. The following year, the competition was won by Jamie Scott, chef-patron of The Newport just to the west. And two years ago Dean Banks, chef here, was also a finalist. Sadly Fife can't claim either of the latter as native sons - coincidentally, both Scott and Banks are from Arbroath - but they both ply their trade here, so we'll adopt them.

For one so young, Dean Banks has travelled extensively - forty countries we are told. He has been hugely influenced by the cuisine of south east Asia, so much so that his menu is entitled Dean Banks Tasting Menu Thailand. Now  that contains one word which just doesn't do it for  me. Thailand? Oh, heavens not that. I have spent a fair amount of time out east, most recently in Vietnam, and love the elegant spicing, the clean lines and the celebration of simplicity in their food. The word I refer to is tasting. I had thought that I was to be condemned to a tasting menu, and was thoroughly delighted to see an a la carte.

The problem with tasting menus is generally not the food: it's the chat. No matter how well it's done, it's never ending. Seven courses here (two optional) and no doubt a pre- this and a post- that. Avoid it by choosing the carte. Or do you? Read on. It has to be said that the staff were terrific. We were principally looked after by assistant manager Dughal (I hope I've spelled that correctly - he may have an extra L). From time to time he would refer some of our requests to Sean, who dealt with us geriatrics with patience and charm. There were a lot of very nice other waiting staff. The sheer numbers would explain the high-ish prices, and Lord knows how many were in the kitchen. Dean himself beavered away at the pass all night, looking remarkably calm, as chefs on top of their game tend to do. We were pretty mellow too. A substantial chunk of home made bread arrived with a plate of miso butter. Give me that and some wine, and I'm happy to await the kitchen's pleasure.

With all these staff it was therefore a surprise to have starters delivered by a cheery young chef. Restaurants which adopt this are usually start up hipster places saving on service costs. This guy was lovely, but he reinforced my point about tasting menus. Ox cheek (cooked for about 12 hours) was cooked with gochujang (Korean chilli paste - and I had to research that for myself), and black garlic. Chef told us something about squid ink as well. He claimed to have foraged the garlic himself (wild, yes, and it is coming into season: black, no - it's fermented). We couldn't resist teasing him a little. Wish I hadn't, His face fell when he was forced to concede that he hadn't actually caught the squid whence the ink came. The end result was wonderfully cooked beef, but too heavy on the garlic. Nice idea. Pork belly with daikon (spelled diakon on the menu) salad was faultless. Daikon is a Japanese radish, a long white veg which I know as mooli. I could have eaten a troughful of this salad. The balance of flavours, chilli, ginger, lime et al was perfection.

To the next course. At least one of the starters was also on the tasting menu. We were concerned that the mains would of a similar skimpy size. Worries over. Hearty and wonderful - the food that is. Panko Squash, Goan Curry, Red Rice - how can veg cooked in breadcrumbs then curried possibly work? It has vague echoes of Mark Baird's Rovellini from Tom Cooks! a few months ago. Goan Curry has few fans more attached than L, who declared she had never eaten a finer example. I rarely pass duck on a menu, but had no idea what to expect from a dish entitled, Duck, Massaman, Confit Potato. Massaman is a type of Thai curry.

At this stage, a word in passing about Masterchef: The Professionals. Each season I swear I will watch it only for the skills test. If you are an amateur cook you will learn a lot. After that, there are only a few things to be learned. Firstly. that Greg Wallace is a ****. But  you probably knew that. Secondly, the judges seem to believe that beef and most other types of meat should be served as close to raw as possible. I have lost count of the number of perfectly cooked dishes criticised for being over done, and an equal number of highly praised ones which I would have sent back in a trice. A friend who is a pro, said he wouldn't visit this place because of the M:TP connections. Fear not, Mr T, you're safe. Dean knows how to cook duck, Seared crispy fat, flesh perfectly pink NOT red. The massaman was on the side, and he really shouldn't have bothered with the tiny slivers of spud; however, to quote the ****, a great plate of food.

We thoroughly enjoyed our dinner. A terrific atmosphere, engendered in the main by the lovely staff - though Dean himself was happy to exchange a few words with a smile as well. Ambitious, clever cooking.Though not a major fusion fan, I would be happy to come back for more, and that's something I say but rarely.