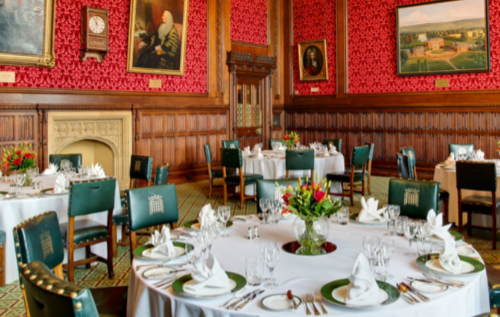 See below for details of the bill

Well that's it! Democracy has gone mad! Is nothing sacred?

For this, Scotland's last week of restaurant free existence, for the final period of no eating out unless you succumb to the horrors of takeaway food and writing about its ambience depending on whether or not you've set your table properly, or remembered to iron the cloth, I had planned a bit of exclusivity. A tee hee, ha ha, see what I've done that you can't, type of review. One even more infuriatingly smart arse than usual.

And I discover that my balloon has been pricked, my bubble burst, my gas at a peep. To discover why, read on.

We like a jaunt to London. In fact some of the best received reviews have emanated from the capital. But not this one, since I didn't write it. Because, you see, it was so exclusive that you weren't to be told - it wasn't for the likes of you.

OK, to the point. A former colleague of L's was the elected Honourable Member for somewhere in Scotland. And let me break the news that being a back bench MP is one of the crappiest jobs going. A vast amount of travelling time, no power or real purpose, and more of your time wasted in stations and airports than many people have to put into an average working week. But quite a nice place to be (until the novelty wears off).

I'd been in the Palace of Westminster once before, to the House of Lords before its judicial function was superseded by the establishment of the Supreme Court, but never to the House of Commons. Our day started with a tour conducted by our mentor's PA. It was the morning before Prime Minister's questions, so the place was pretty busy. Some very well known faces and many more who were vaguely recognisable. A lot of good tailoring on show, and a definite whiff of testosterone.

The morning coffee was very good indeed. We hadn't managed to get tickets for PMQs, so we arranged to reconvene for dinner. In those halcyon days (2014), entry to the Strangers' Dining Room was restricted to members and guests. But since 2018, on two days per week, the hoi polloi, even you, could dine there, given a reservation, security clearance and checking your firearms in at the door. I was unaware of this until I started on this article, so I'm a bit unclear as to the current prices. Some reviews which I've read suggested £65 or even £75 a skull. Jay Rayner complained loudly about a bill for £180 for two (including wine and service). It's a very far cry from our visit: I found the menu in a recent clear out.

Soup of the day (Wednesday, as I recall) was £4.60. A good goat's cheese mousse with pan (sic) d'épices, beetroot and raspberry purée and hazelnut dressing £6.25. A plate of the finest Scottish (is there any other type worth the eating?) smoked salmon would have set one's host back £7.50. It was in the early days of adding nutritional information to menus. Our carte proudly proclaimed that the latter dish was gluten free if you didn't eat the bread.

To mains. The dearest plates to be had were beef, either the classic combo of ribeye, chips and béarnaise, or sirloin with duck fat fondant potato (how did I miss that at the time?) Both £15.85. If you were a carnivore watching the pennies you could have economised with the grilled spatchcocked partridge (with roast pear, obviously) for less than a tenner. Cod and trout for the fish eaters, and squash risotto or mushroom and artichoke crumble for the veggies. Puds for under five quid. What's not to like?

This place wouldn't win any stars, but for decent, tasty, well presented food it would get my vote (at those prices). The surroundings are calm and elegant, and the service almost regal. I'm not sure how many restaurants can boast 650 regulars, and out of those, how many head waiters will know all of them by name? The MP's lot may not be the happiest one, but with a staff canteen like this, it's not all bad.