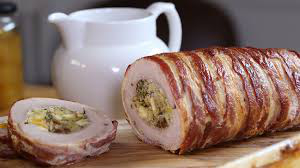 The title of today's column really should be Get Stuffing! That exhortation is less likely to get you a punch on the nose, but equally it is less attention grabbing. Today's recipe is inspired by a pork fillet  which I bought at the butchers for this weekend. It's not the most exciting of meats, and can go very dry if you're not careful. This dish is one I've made a few times; however, once I'd stopped to consider the topic, I realised just how many variations there are on the theme.

For many in this country, stuffing is something which enters the agenda only at Christmas when the annual problem that is a turkey presents itself in the kitchen. In theory you are adding flavour, and trying to prevent the end result being too dry. In practice, stuffing a turkey is fraught with real danger. Many fail to realise that the cooking time must be based on the combined weight of the bird AND the stuffing, resulting in a beast which is still raw in the middle, with potentially catastrophic results. The danger is even worse in the USA at Thanksgiving, when many traditional stuffings include raw oysters. In the UK we talk about forcemeat  stuffing. The word derives from the French farcer, to stuff.

Many types of vegetables appear on menus all over the world described as stuffed. Sometimes this is literally the case, as with tomatoes or peppers; sometime it just means wrapped, as with cabbage or vine leaves; and on other occasions, it may simply involve putting something on top as in stuffed mushrooms or stuffed eggs. (Yes, I am aware that an egg is not a vegetable, thank you. Don't write in.) But I started with a carnivorous idea and I'll continue that theme. No, actually, let's begin with fish.

The simplest type of stuffing of all (and one of the most effective) involves cleaning a whole fish, such as a sea bass, putting herbs and slices of lemon in the belly cavity then baking. I wouldn't dream of roasting a chicken without half a lemon and half an onion in the cavity, and most birds for roasting benefit from something, supposing it's just a little butter and seasoning.

Sometimes you have to create your own stuffing space. Chicken Kiev, for example, should have a fountain of garlic butter pouring out when you cut into it. It's difficult to get the necessary seal if you try to wrap up a flattened breast. The most effective method is to cut a well into the thickest part of the breast, fill with a plug of chilled garlic butter then seal it with a little chunk of the faux filet (the thin piece of meat attached to the inside of the breast).

In many cases (as with today's recipe) you form a parcel with one or sometimes two pieces of meat and use them to envelope your stuffing. This can be done with chicken (breast or thigh meat, usually) or pork/veal escalope. You want to get the meat nice and thin. For a chicken breast, start by butterflying it, ie cutting it almost in half without going right through. For a You Tube demonstration, click here. For pork or veal place the escalope between two sheets of clingfilm and  beat with a meat hammer or tenderiser (NOT the studded part).

The technique is you then stuff the meat with whatever you fancy and wrap it up tightly. At its most fancy this is called a ballotine, traditionally wrapped up as a sausage shape in muslin (these days, clingfilm) and tightly tied with butcher's string. I tend to wrap as tightly as I can with streaky bacon, and hold the thing in place with cocktail sticks. For chicken it's a great way of jazzing up bland meat. The technique will be the same as for my pork recipe below. Use your imagination with the stuffing. Over the years I have used things such as black pudding and apple, haggis, pesto, flavoured butter, ricotta and sundried tomato. You get the idea.

Chop the apricots and pistachios by hand. While you don't want them too coarse, using a blender will reduce them to pulp/dust.

Ingredients (Quantities are approximate - see below)

For the stuffed fillet

For the Marsala gravy

The reason the quantities are so vague is that pork fillets vary in size, and there may just be two or three of you. Prepare your fillet before you start making the stuffing. The ingredients won't reduce much, so use your judgement. If you make too much serve it on the side with tomorrow's dinner.

Remove any fat and sinew from the fillet. In the end of the day you will be cutting it into medallions, so trim off any narrow end pieces and reserve for the gravy. Butterfly the fillet (see above) and flatten a little. A thickness of 1.5 to 2 cm is ideal, provided you can get your stuffing in the middle, and cover it completely when you roll.

To make the stuffing, sweat the shallot very gently, with a little s & p. When it is completely soft add the apricots and pistachios, mix well and leave to cool.

While the shallots are cooking, prepare the bacon. In days of old I would have suggested you asked your butcher to cut it very thinly, but when was the last time you saw bacon sliced to order? Instead, lay a slice out on a board. Holding one end of the rasher, run the back of a large knife along it exercising some pressure. This will lengthen and thin it. Use the same technique if you need bacon to line a terrine tin.

Lay the bacon slices on a board, then lay the fillet on top, cut side up. Spoon the stuffing mixture along its length. Don't overfill. Then roll the fillet up and wrap the bacon around it as tightly as you can.  Hold in place with a few cocktail sticks. If using a whole fillet, it probably makes sense to cut it in half so that it can all fit in a single frying pan.

Preheat the oven to 190˚C/Mark 5. Ideally, you want to use a frying pan which can go in the oven. If you don't have one, preheat a roasting tin to which you can transfer the fillet after searing on top of the stove. Brown the fillet on all sides, transfer to the oven and cook for about 20 minutes. As you will be slicing this up to serve it, you can happily cut it open to check if it's cooked through. To serve, cut into slices about 3 - 4 cm thick. Remember to remove the cocktail sticks.

To make the gravy, soften the shallot or onion in butter with any pork trimmings. If you like you could add a slice or two of carrot and celery. Add the Marsala and reduce to about a quarter of the original amount. Add the stock and reduce again to the consistency you want. Sieve the gravy and check the seasoning.