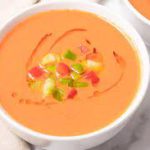 You ungrateful lot may not appreciate it, but this recipe writing is fraught with peril, not to say downright danger. Seasonality is one thing, but to publish a recipe which works only when the mercury is high can be fool hardy at best. Worse still if you have a restaurant and need to plan menus sometime in advance. In her excellent Wee News bulletin, Vikki Wood of The Wee Restaurant bemoaned putting today’s special on the menu. By the time of its first appearance it was howling rain and blowing a gale. Bemused customers wondered why they were being offered cold soup.

There are others, but for me gazpacho is the king of chilled soups. As with many wonderful things to eat, it was originally a peasant dish, apparently favoured by Spanish muleteers. Those of you who are up on your Arabic will not need me to tell you that the name means soaked bread. There are loads of variations on the theme. This one comes from the wondrous cook book, which some of you may own, called A Bunch of Fives. I look back now on some of the recipes which I wrote and wince: there are a good few others where I now think, wouldn’t do it that way myself. I think if I were making gazpacho today I would omit the onion. Adding the egg yolk moistens the bread, but alternatively you can just soak the bread in water for about 20 minutes. Before using squeeze out the excess moisture. You need ripe tomatoes with flavour, not the ghastly Dutch things which we usually get these days, but you can get away with using tinned. You obviously can’t easily deseed tinned tomatoes. Sieve them, or simply don't bother. Up to you. I have seen recipes which use either passata or tomato juice.

This is all going to be done in the blender. I would advise holding back some of each veg at the outset. Firstly, depending on how pretty you want your final dish to be, you may want to reserve some for garnish. Secondly and more fundamentally, this will allow you to taste the first batch and have the opportunity to adapt it to your taste.

Tear the bread into chunks. Take two or three cloves of garlic and an egg yolk and chuck into a blender. Add about six tablespoons of olive oil, drizzling in while the blender is running as for mayonnaise. Add about half of the vinegar then add in batches, chopped up, the tomatoes, the  peppers, the onion, if using, and the cucumber. Add s & p, then do a final check on the seasoning. Add ice cubes, stir, and serve very cold. Traditionally you would reserve, unblended, some diced tomato, red pepper, onion and cucumber and add to the serving bowls. You can add chopped herbs such as chives, parsley or tarragon and serve with croutons. Or not. Some would finish with a drizzle of olive oil. I don't.

Accept that whatever you do, a Spaniard will tell you that you have got it wrong, just as no Italian will ever approve of your minestrone, and as I will reject out of hand all stovie recipes other than my mother’s. There are many variations. In Jerez it is served with raw onion: in Malaga it is made with veal bouillon and garnished with grapes and almonds: in Cordoba it is thickened with cream and polenta: in Segovia it is flavoured with cumin and basil, etc, etc.