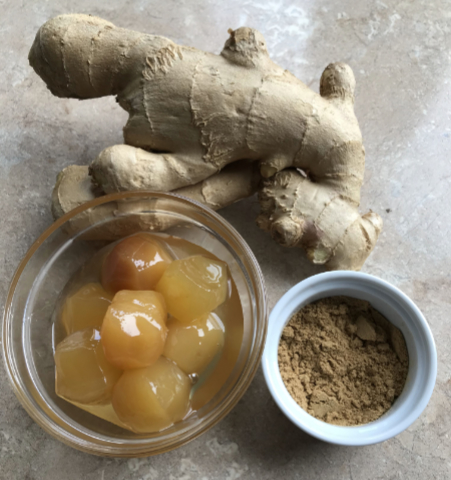 Neither of my grandmothers could have been described as exotic. So let's think of some exotica which we do have today but didn't have in our culinary lives 30 or 40 years ago. Turmeric root, galangal, cardamom. All of them closely related to today's hero. Yet we don't think of ginger as at all out of the ordinary. The most basic supermarket will stock a variety of gingerbreads, ginger nuts are among the nation's favourite biscuits, and everywhere you look you'll find lashings of ginger beer. Indeed, the word, "ginger" in the west of Scotland is the generic name for fizzy soft drinks. Your granny would have had it in her store cupboard, for heaven's sake. In short, we don't think of it as an out of the ordinary commodity, any more than we give pepper a second thought.

For all that, I think I was in my 30s before I encountered fresh ginger. What we use is the root, or rhizome, although in south east Asia whence it hails, the leaves are used too. What did the Romans ever do for us? Yes, they introduced us to it, though they employed it as a medicine rather than in their cuisine. In the Middle Ages it would have been used in a wide range of savoury dishes. Latterly in western Europe it has been used far more commonly in sweet dishes.

Many countries have their own ginger based specialties which are very much part of their tradition, whether cake like, such as our own traditional ginger bread (see the recipe below) or in crisper biscuit form. Think Yorkshire parkin, German pfeffernüsse, or Scandinavian pepperkaka or peppernött. (Incidentally, don't be confused by the pepper prefix. It relates to the Pfefferländer, ie the eastern countries from which the spices come.) A delicacy which doesn't seem to have survived the Middle Ages was white gingerbread. This was a spicy almond paste flavoured with ginger. It was similar to marzipan, and was often decorated with real or imitation gold leaf, hence the expression the gilt on the gingerbread.

It comes in so many forms. Powdered is probably the most common, a staple in every baker's cupboard. I seem to recall that my late Dad's favourite sweet was a chocolate ginger. Stem ginger makes a rather more sophisticated way of tarting up a cake or pavlova, and is great with ice cream, for one of my many cheats' desserts. You could make your own - simply boil it in water and sugar until it softens. Or a ginger infusion - a delicious thing, even if the medicinal claims made for it are doubtful. And I haven't got round to ginger wine, ginger liqueur or pickled ginger.

I suspect we have the popularity of Indian food to thank for the introduction of the fresh stuff. As spices became more commonly available, we started to experiment making our own curries. Pretty soon we realised that there was more to it than a shake of Madras curry powder. When I made my first curry from scratch I had to go to Napiers the herbalist to buy half the ingredients. Once you've first created your own building block of a paste of onion, garlic, chilli and ginger, you won't go back. An ever present in stir fries, whether aggressively in slices, or more gently grated, it's never out of stock in my fridge. If you find you have too much, it will freeze well if you grate it first. And finally I wish I could remember where I got the top tip for peeling it. Use a teaspoon and you eliminate wastage.

I'll post a couple more recipes in Tom Cooks! on Friday, but for now, the best gingerbread ever, courtesy of Sarah Mellersh, who else? The first gingerbreads were made with honey, which is still used in Germany. We Brits started using treacle, and much the better our gingerbread is for it. 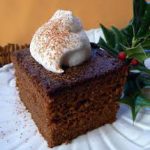 A quick word on the butter v marg debate. Margarine for me is a substance which I am unhappy to see anywhere. My friend Liz T, however, maintains that margarine is better for cakes. She was a home economics teacher. I suppose I should take her advice. Hmmm. L, however, is firmly in Liz's camp which is why our fridge currently boasts a whopping pack of Stork. You will need a 2lb loaf tin, greased and lined.

Preheat your oven (or anyone else's that you happen to be using) to 170˚C/Mark 3. If possible, put your pot on the scales and measure  the butter, sugar and treacle directly into it. For the treacle, use a metal spoon. Heat it in boiling water, and dip the spoon back into it between spoonfuls. This will make it easier to get out of the tin. Put the pan on a gentle heat and stir until all three are melted.

Sieve the dry ingredients into a baking bowl. Add the melted liquid mixture to the dry goods, then add the egg. Put the milk in the pan and warm gently. You want to be using the milk to get the last of the sticky goodness out of the pan. Pour the warmed milk to the bowl and stir with a wooden spoon until completely smooth.

Pour the mixture into the prepared tin, then bash the tin so it all settles down. Bake for 45 minutes. Resist the urge to open the door during cooking, or something bad will happen.